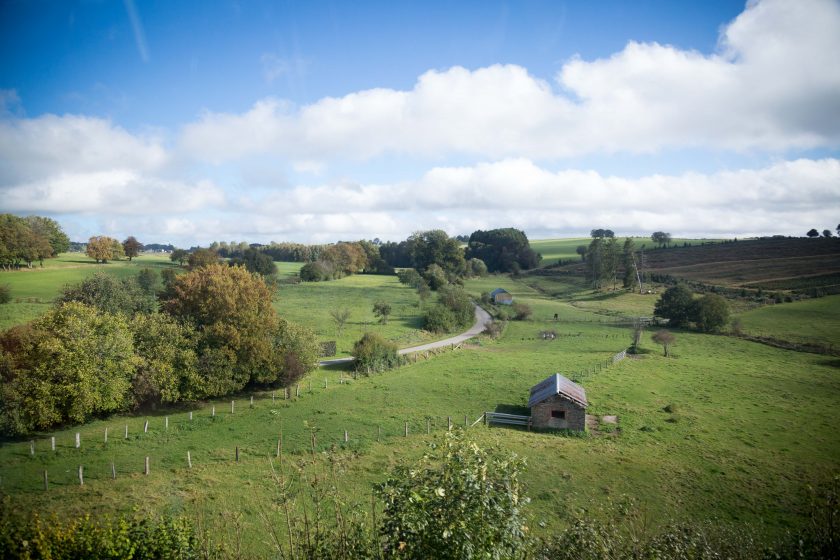 Where I managed to keep the force with me in Brussels, I get hungry in Luxembourg, and the Connecting Europe Express enters the 26th country of this epic journey, the last one.

There’s an inherent risk in going back home before the end of a project. Your mind and body might just go oh yeah on you, and relax a bit too much. Big mistake that would be, the force with you would not be, no more, young Skywalker. Better remain focused and don’t forget that there are three more days on the Connecting Europe Express before we can really say we did it all. Then we can relax or just go back to life before the train, if you can remember it.

This has been my main thought in Brussels, although I had a pleasant night and a pleasant dinner, Belgian of course, to continue the gastronomical journey I have taken in parallel to the one on rails. So, I dined in a Belgian brasserie and had a very nice Carbonnade, with french fries, it goes without saying.

I won’t say much about the Belgian capital because, well there’s just too much to say. It is basically my adopting city. It might not be one of the most beautiful cities in Europe – although Grand Place is splendid especially overnight – but it is one of the most lively, multicultural and fun cities I know.

It is also the heart of the EU, as most institutions are located here, reason why one-fourth of its inhabitants are expats from countries all over the EU, and the world. So, naturally, lots of small communities formed over time, each mingling with the others and the locals, but also each bringing to Brussels some of its own cultural heritage.

Anyways, we leave Brussels early in the morning to go towards Luxembourg. Today the train is really full, and it will probably remain so for the next two days. I see a lot of faces returning, between VIPs, colleagues and Instagrammers, like our friend Lumadeline. But also lots of new faces, all happy to finally hop on the Connecting Europe Express. Lots of people mean lots of energy and some hectic activity on board, kind of nice to see actually. Far is the time we were only 14 people on the train.

It is mostly raining outside today, so I focus on taking some pictures of the people that are populating the train.

When we reach Luxembourg it is a landmark moment, country number 26! We reached them all in 34 days. No train has ever done this before, and who knows if there will be trains doing this again in the future. We aren’t celebrating yet, but I know the number 26 is in the hearts and minds of all the crew members of this expedition, especially all those who spent so much time on the train.

In Luxembourg there is no time for lunch, which no one seemed to think to provide today neither on the train nor at any other point in place or time. Far is the time of the food marathon in Romania, and other countries (see post of Day 17).

Instead, we are taken to visit the Bettembourg Intermodal Terminal. This is one of the biggest logistic terminals in Europe where truck freight is shifted to rail. It is also called a rolling highway, just like the one we talked about when we were in Brenner (see the post of Day 8).

Commercially speaking, we are in the centre of Europe, not far from the three biggest ports of the continent. This is obviously a necessary site for the re-routing and re-distribution of freight. Shifting freight cargo to rail is of paramount importance to decrease road traffic, and reach the sustainable objectives of the EU Green Deal policy.

It’s raining cats and dogs now, but we can still see some demonstrations of how it is done. Cargo containers can be left by trucks on some rotating platforms, which then align to form a train. Alternatively, they are lifted in the air by huge cranes and put on the train platforms. It is quite a big operation and there are thousands of containers all around.

After the demonstration we all go to Luxembourg city for a conference which is about, yes you guessed it: rail freight. I am not following the whole debate. Actually, I mostly think about food, as it seems to be impossible to get some in Luxembourg in the afternoon. So, I gather the last few energies I have and start typing and working on the blog post of the day. Mostly to avoid thinking about food. Big fail of course.

We will finish here quite late, perhaps there will be some time to visit the city later. Tomorrow, we will go to Strasbourg during the plenary session of the European Parliament. That’s when important decisions are taken. We’ll see what happens.