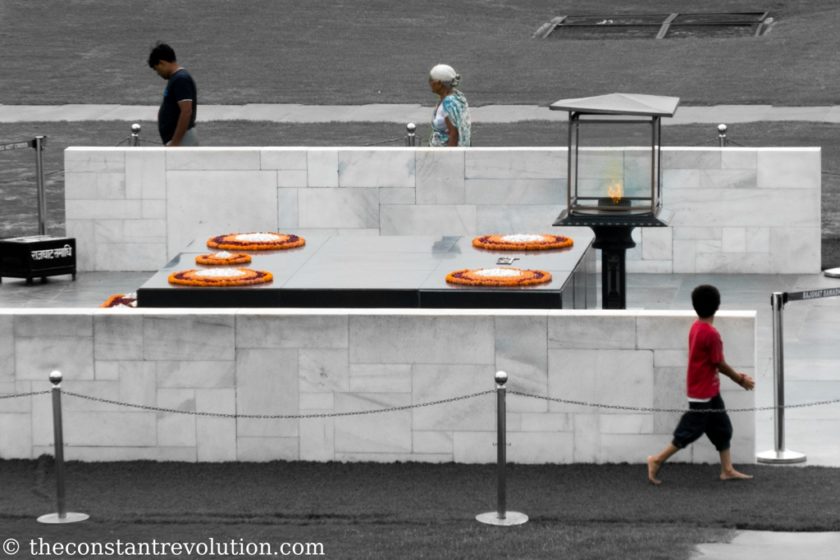 The Raj Ghat, in the North-East part Delhi, is a memorial to Mahatma Gandhi, and is situated in a big green park, with long avenues and wide meadows. The black marble is settled where Gandhi cremation took place, while on the other side an eternal flame burns.

Gandhi is a strong historical, moral, and spiritual figure in India, and for the world. He achieved so much in life in terms of social battles, and he provided a beautiful outlook on how India, and society in general, should be. The story of his life, ideas, and actions, if still unknown, can be thoroughly reviewed at the museum that is not far from the Smriti, free entrance, if you are in Delhi. In one of the many books about his life, or on the internet, if you are anywhere else.


I believe Gandhi would be disappointed by what India, and the society in general, has become. Yes, his face is on every note in the country, there are museums and memorials all over Delhi (and India, I imagine) to remember him, universities are named after him. But his legacy, his dreams, his ideals, all of that is slowly dying away, or at least, for now, it has remained in the hearts of a minority of people, while the world is stepping away from it.

It’s interesting to note that in life he fought so many battles for equality, and dignity, and the rights to decent work for the poor and the untouchable; and today is mostly the wealthier and educated class that goes to pay a visit to this memorial. I have remained there a while to observe, I haven’t seen anyone from the streets.

On the other hand, Gandhi was in agreement with the Buddha’s teachings in saying that, and I am paraphrasing here, when the main concern is how to get food on the table, there is no way people will manage to develop a spiritual and balanced life, or care for the world or the others. That is why both Gandhi and the Buddha stressed so much the importance of work, and minimum standards of material well being, even before spirituality. It is therefore normal, by his own teachings, that the people on the street, those he represented the most, now “forget” about him. They have bigger issues to deal with.

Still, as Albert Einstein once put it, and I am paraphrasing again, we are lucky there has been someone like Gandhi walking this Earth in flesh and bones. It’s a good thing to preserve his memory, somehow. Who knows what the future holds.

As for me, even though probably I do not agree 100% with Gandhi’s take on society (but I don’t agree 100% with anyone really), I came to see this place because I admire the courage, the strength, the wisdom, and the example this man provided with his own life; a true leader, like there hasn’t been in a long time. The very least I can do is to dedicate a little space in an infinity of space to this great little man, and contribute to keeping his memory alive.

Here are two of my favourite Mahatma Gandhi’s quotes, which are very consistent with what the Constant Revolution is about: our inner change is also the change of the world, and the only change possible.