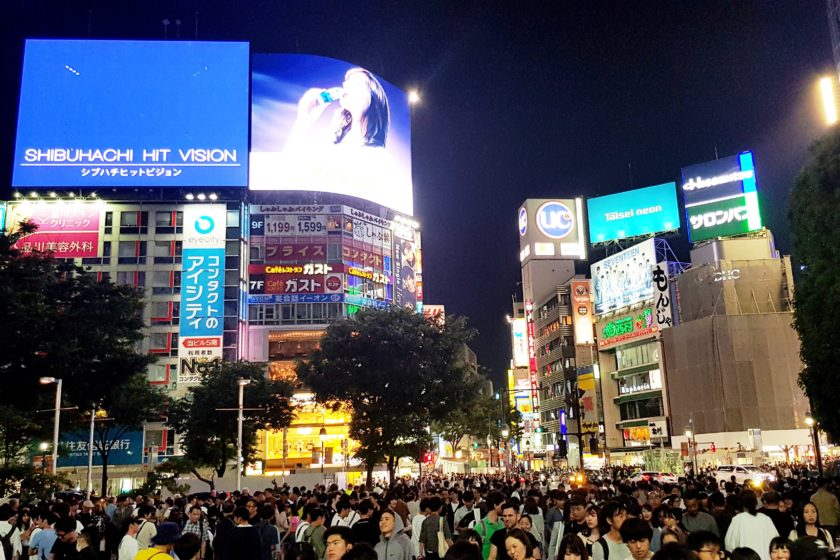 There isn’t a good way to describe Tokyo. There’s simply too much to see, to taste and to try. So, my humble advice is to do it all, outstretch the hours minutes and seconds to fit in as much action as you can in one breathless go, just like this:

Your typical two days in Tokyo:
You wake up early and take a taxi a metro or a bus which from now on we’ll call taxobus for simplicity to go to Tsukiji Fish Market to eat sushi and be relieved of a distressing duty right away then you jump on another taxobus towards the Imperial Palace and its unmissable gardens and after a couple of hours you hurl yourself in the direction of the famous Shibuya district to cross the busiest street crossing in the world three or four times and imprint the experience deeply in both yours and your mobile phone memories after this a well deserved coffee which you can find at every corner of the city and away with the shopping in Shibuya and Cat Street you wouldn’t leave without a new pair of sneakers would you?

It’s lunchtime but time is short so you sneak in a small supermarket which are literally everywhere and you buy a couple of Onigiri well wrapped in plastic just like everything else then you insert some coins in one of the zillion vending machines of drinks you’ve never seen before and you end up trying a new one every time thirst calls for it but they seem to be infinite so you get on a taxobus as it’s time to visit the impressive tree-lined road of Meiji Jingu Shrine but Tokyo is also a city to walk so you put on your new sneakers and you aim straight for the bars in the narrow alleys wallpapered with neon signs of Golden Gai once off limits to tourists but now proudly providing overpriced drinks to everyone.

You need food and it so happens you stumble upon a Yakitori restaurant where you stuff your face with all kind of skewers more beer and lots of sake to get ready and be carried to Roppongi district on taxobus for a wild Karaoke and you won’t believe your eyes to find yourself alone in the room as in Japan Karaoke is a very private affair at this point just before going back to your hotel you go get some fatty pork Ramen to dry up all the alcohol;

on the following day you start under the heading culture and you land a Senso-Ji JìKan’ei-Ji and Nezu Shrine combo in one breathless go you pass by Yanaka Ginza colourful shopping district and through Ueno Park where you look at the Tokyo National Museum but you don’t enter it and instead you find an awesome Soba restaurant to revive yourself before walking for an indeterminate amount of hours around Akibahara district spending fortunes at Pachinko machines buying manga souvenirs to your hearth content and well you wouldn’t leave without a new Sony camera now would you?

Devastated but happy you use the little money you have left for a dinner in a traditional Ryokan restaurant if you want you can add a kimono for a perfect insta-photo and that’s how you spend two days in Tokyo.
And that’s 500 words, let’s go.