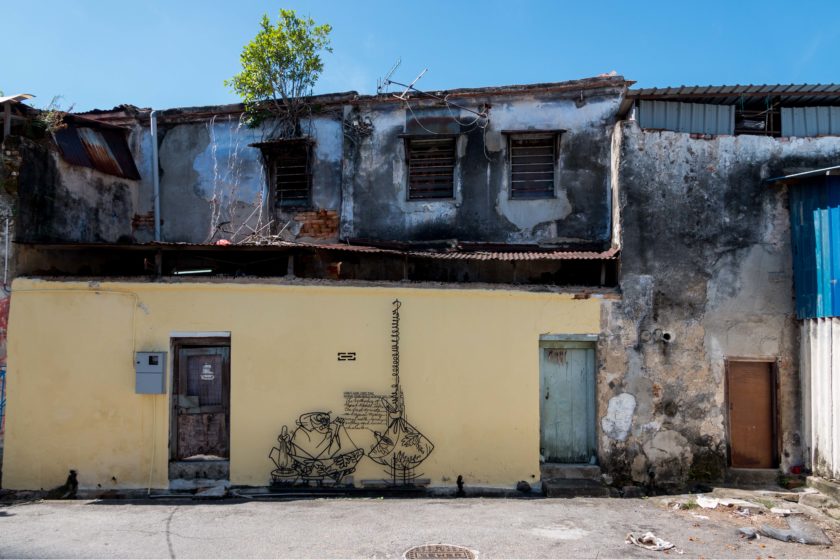 Penang is a must visit spot for anyone travelling to Malaysia for its blended cultural heritage and history, a great example of harmonious coexistence which made the region one of the most prosperous in Malaysia.

A port strategically located in the North-West part of Malaysia, on the Malacca Strait, Penang is a former British colony that underwent several transformations before finally joining independent Malaysia in 1957.

Today, it is a big tourist hub and one of the most prosperous Malaysian States thanks to its blended cultural heritage, palpable first and foremost in the capital Georgetown. Indeed, along with Muslim Malays here live huge communities of Chinese Buddhist and Indians Hindus, and also a small community of Malay Christians.

I have never seen a place where communities with such different cultures are so evenly distributed and live together. I could easily see how a Malaysian society with a very rich heritage is being formed there, and I loved it.


Talking with some locals, they confirmed that in the past there has been “problems” and still today a few people are a little conservative about mixing cultures (where in the world there aren’t people like that?). However, for the most part, life goes on harmoniously. That is also the perception I had during the few days I spent in Penang, which I believe is the secret of their success in terms of conscious development and as a touristic destination.

Perhaps in the past the place was known as the “Pearl of the Orient” for its strategic positions among the Easter seas, but today it is certainly a Pearl for the prosperity it created through its intercultural society.

So, what are the nice things to see and do in Penang? Well, the place where to start, and where to be, is UNESCO heritage Georgetown.

No wonder Georgetown is one of the pride of Malaysia. The city spills good vibes all around with its modern outlook, tourist hubs, colonial past, traditional food, and rising hipster life. There’s something for everyone and every taste. On my side, I have rarely visited such a photogenic city, and I had a lot of fun walking and shooting around.

The best thing to do is indeed to walk around the streets and discover for example its colonial architecture or the various sites that made it a UNESCO heritage. A visit to the Penang Heritage Trust in Church Street might be helpful to get the necessary brochures, maps and information not to miss out anything.

Better yet for me has been to discover Old Town’s rich Street Art. In 2012 the municipal council hired street art artist Ernest Zacharevic in a conscious effort to recall the heritage of the town and at the same time provide a more modernly vibrant, pop atmosphere. Well, mission accomplished! Since then more graffitis have been drawn on the walls of the city, with different styles, although Zacharevic ones are easily recognisable.

While you go for graffiti and cultural heritage walks, you might notice that you are passing by Little China or Little India, two of the most colourful neighbours in town, or through Armenian street where the concentration of street art is the highest.

Along all of these streets, you’ll be able to taste all kind of amazing food, be that Malaysian, Indian, Chinese, or Middle-Eastern. Western food is also provided by many restaurants.

Night-life on and around Chulia Street is vibrant, and if you desire so you can go party until late, or try all kind of street food, or just enjoy a coffee or few drinks in one of the many bars.

A super nice thing to do, if you happen to be there on Sundays, is to glance at the hipster scene in Georgetown at the pop-up Sunday market at the Hin Bus Depot Art Centre. You’ll find here art exhibitions, a lovely handicraft market, some food and drink trucks, and the unmissable acro yogis having fun 😉

Last but not least, Georgetown is also a modern city, with skyscrapers and big shopping malls, cinemas etc… So, if that is what you are looking for, no problems at all. I had not been at the movie theatre for almost a year, so while I was there I decided to go and enjoy a film and some popcorn, which was also incredibly cheap compared to Europe, only 3€!

As I said, there’s something for everyone and every taste! But there are also some nice things to do outside Georgetown.

Right outside Georgetown, there are two activities worth mentioning. The first is a cable car that takes quickly and easily to the top of Penang Hill, with a nice view that extends over the island and to the ocean. There are also a few short walks to do around it. It is obviously very touristic, especially during public holidays be ready to queue.

I didn’t go personally there, but I went to visit Kek Lok Si temple, a contender for the title of the biggest Buddhist temple in South-East Asia, and certainly the biggest in Malaysia. The structure is indeed quite impressive, the pagodas can be climbed to get a very nice look of Georgetown, and it hosts at its highest point an over 35 m. statue of Kuan Yin, the Goddess of Mercy.

If you happen to be there during the Chinese New Year (in February) it is also open overnight and lightened up by thousands of light bulbs. The view on the town from one of the main pagodas is really nice. Be prepared however for long queues, slow walking, and even difficulty in getting on a bus or finding a taxi during this time.

Last but not least, a visit to Penang’s National Park is absolutely worth your time. Or so I have been told because I didn’t manage to go myself. But I have talked with several people who assured me the park – one of the newest and smallest in Malaysia – is very nice. Onsite, there’s a two hours walk in the jungle to do, or you can get on a boat that will take you to Monkey Beach. I understood that people try to sell tours as soon as you arrive at the entrance of the National Park, but if you go directly to the boats it will be much cheaper.

GETTING TO AND MOVING AROUND IN PENANG

Public transport in Penang works pretty well and all the sites mentioned above can be reached by bus for a very little price.

I must say during public holidays like the Chinese New Year when I was there, it becomes a little more difficult. I wanted to go to the National Park by bus, and I have waited for more than an hour at the bus stop (bus number 101) closest to my hostel. Unfortunately, there were so many people that three buses passed by without even stopping, they were already full. At that point I gave up, too many people around for my taste. In this sense, it is better to avoid festivities. If instead you like busy times, fireworks, lots of lights and the like, the Chinese New Year can be a good time for you to visit Penang.


Taxis, using the Grab app, renting a car or a scooter are other ways for moving around the island, like everywhere else in Malaysia.

As for getting to Penang, nothing can be easier. There’s plenty of connections via land or via sea, and any tours operator or guest house will sell you tickets to get there or, from there, go to your next destination. There’s also a well-connected airport if flying is your preferred means of transport where low-cost companies also operate.