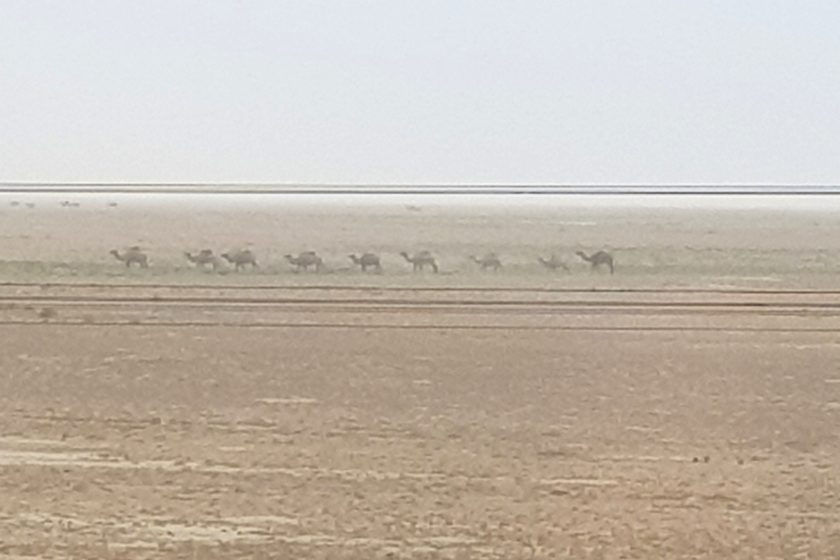 Two easy border crossings in about 10 days, crossing the whole Uzbekistan from East to West and reaching the Caspian Sea.

I am kind of surprised at the clear cut difference there is between one country and the other in the whole Central Asia. I mean, all of it. The people, the landscape, the culture… well, perhaps only the food remains pretty much the same everywhere.

Short digression about food: very little choice, everything has the same taste, if you are vegetarian you are fucked, and I had stomach bugs most of the time. Incredible, after one year and a half travelling around the whole of Asia, eating everything everywhere with no issues whatsoever, in Central Asia my stomach gave up. It had to happen I guess, sooner or later.

Uzbekistan seems to be more populated, and at least on this side it has more fertile lands than Tajikistan. There’s a lot of fruit all of a sudden. People are more used to tourists as well, they speak better English, and everything is more organised for tourism (high-speed trains, for example), at least on the axis that goes from Samarkand, through Bukhara to Khiva, on the old Silk Road, three names of cities that sound like legend worldwide.

In Uzbekistan it’s easier to travel, there are all comforts, and it’s cheap, so there are more tourists, and not only the adventurous type, every type of tourist. People are welcoming, sometimes looking with a little more suspicion than curiosity, certainly more cunning; they are starting to see the money-making potential of mass tourism. Very different compared to the authenticity I felt in Tajikistan. But mountain life is different anyways.

After Khiva, and a quick detour towards the , I got to Nukus, worth visiting its modern art museum. There I took a 30 hours long train ride to Aktau, in Kazakhstan, on the shore of the Caspian Sea. The train ticket cost about €35 and the passport control at the border happens on the train.

Look out the window from time to time, you’ll see a lot of camels around the Uzbek desert (featured image).

In Kazakhstan, everything changes again: it’s richer, supermarkets have a lot of imported products, people look more Caucasian and speak a lot more Russian. As I have remarked in another post, it really feels like a passage between Russia and the rest of Central Asia.

Central Asia has been a great journey, on the footprints left by the silk road, and through the cultural remaining of the Soviet Union. Each country left a mark: Kyrgyzstan for its nomadic lifestyle and high green plateaus, Tajikistan for its authenticity and immense barren mountains, and Uzbekistan for its vibrant culture and border-less steppes.