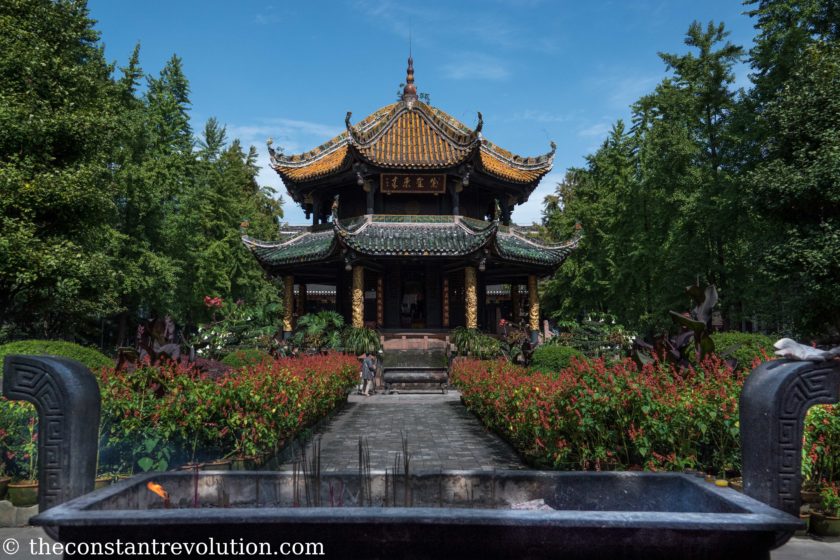 Nightlife and great food, temples and opera, and of course Pandas. Chengdo is the Sichuan Province capital, and with its surrounding area rich of giant Buddhas and holy mountains, it is emerging as the place to visit for both Chinese and western tourists.

A place with a wide cultural heritage, its history dates back to the 4th century B.C. when it served as the Capital of the Shu kingdom, Chengdu is today a vibrant modern city with a population of some 20 million.

I have spent there a few days as I had to extend my visa, so I had the opportunity to check out several parts of the city. While I waited for the procedure to complete, I went to visit some famous sites in the surrounding area as well, like the two holy mountains of Buddhism and Taoism.


Here is how I did it all, the things to see and do, and my impressions on a city that gives genuinely nice vibes. The post is kind of long, but you can scroll down to the title that interest you 😉

Chengdu is a mix of charming urban landscape, with many skyscrapers sometimes grouped together in densely populated areas (East station!), and a series of green parks, historical and cultural spots which preserved traditional buildings. There are also several interesting museums, sometimes for free, a rarity in China.

However, I always have fun walking around randomly in cities instead of going straight for a touristic spot. I could go on for hours. Like this I ended up crossing Baihuatan Park for example, and in its middle came across an interesting exhibition of Bonsai composition.

In the same way I had the opportunity to walk through residential areas, where there is nothing special really, just Chinese people living their daily lives, with shops, traffic, and bars where many people play cards or Chinese chess or some other games, mostly Mahjong, and normally gambling a little bit too. This kind of places can actually be seen as well within parks and other parts of the city, and are frequented by people of all ages.

An interesting thing about Chinese cities is that they are often divided into clear sectors when it comes to shops. I am not talking about fancy shopping areas, which are the same as in any other city in the world. This is different. There’s a place for example where a whole neighbourhood sells clothes, just south of the North Station. It is the reign of counterfeiting and reading the names of the brands, which have an onomatopoeic sound that reminds of the original ones, is pretty fun. Of course, not supporting counterfeiting here. Bad! Really bad!! Wrong!

Still, it is impressive the size and the number of shops selling clothes of all type all grouped together in one spot, and over four floors. It’s like a little village in size. And just like this one, there are also neighbourhoods selling electronics, or iron for construction (yes I ended up there too), or safes and so on.

These are all a little bit outside touristic areas, which are all in the centre of the city or close by, along the inner circle.

Even by walking randomly, you end up reaching some touristic spots like Wenshu temple or the Dragon Old Street. These are well-kept parts of the city, with a traditional look, normally revolving around a temple or a monastery, which now offer lots of souvenirs shops, restaurants, massage parlours etc. They are nice to visit and walk around for a little while, especially overnight they are more charming. But frankly speaking I wouldn’t stop there for dinner or to buy stuff.

Now, Chengdu is famous all over China for its food. Really! When I managed to speak to any Chinese they confirmed it, some blatantly revealed they went there exclusively to eat. Mmm… (this is a sceptical mmm, not an mmm I love that food).

To me, it sounds a bit much. I have been there for a few days and tried all kind of stuff, even broke my vegetarianism just to taste some proper Chinese cuisine. It’s a hard life for vegetarians in China, let alone vegans.

I even tried the famous cow stomach. And… good. The food is good, nothing to complain about. Good hot pots (the speciality of the region, and can be vegetarian as you chose what goes in it), decent street food, good stir-fried stuff. Yet, I didn’t find it exceptional. It’s very spicy, a numbing type of spicy. I like it ok, but also think it takes away the taste from pretty much everything, especially fish.

In the end, I didn’t find the food better than other places I have visited in China. On the menu, I have kind of seen the same things too.

Perhaps I didn’t find the good places. Or perhaps I didn’t move far enough to actually change the type of cuisine. Who knows. It’s true that I always go randomly and I chose local and simple places over fancy and touristic ones. As a good rule of thumb, especially in Asia, I always go where there’s a lot of people, as they eat out a lot and they know where to go. Or perhaps it’s just a matter of taste. I like the food here, but I don’t find it so great as it is described by some.

Anyways, Chengdu is also famous all over China for its night life. Indeed, there are a lot of bars and clubs, mostly located close to big shopping streets. There are always a lot of people around, creating a nice vibe. After a certain hour its a very young crowd, with a very young crowd type of music, just saying. However, if you so wish, you can party out all night in Chengdu.

I loved to go to the opera in Chengdu. Specifically, I went to Shu Feng Ya Yun Sichuan Opera House. It’s important to know as there are some bars and restaurants in the Old Streets that offer some kind of Face-Changing show, but that’s not the real deal. Tourist trap. If you buy a ticket from your hotel or hostel ask where they are sending you first.

I paid my ticket 140 Yuan for the Shu Feng house, and bought it straight with them. This was the cheapest ticket, and I had a very good view of the show. It also included free tea and sunflower seeds to munch on. More expensive tickets, other than giving you a closer placement, might include photos with the artists, a massage, and an ear cleaning service. Pretty cool! The theatre also serves food and drinks, and it is possible to take photos and all, it is not the kind of “opera” that needs absolute silence.

Check this article for a full description of this beautiful experience.

There are many Taoist and Buddhist temples in Chengdu, but Qyngyang Palace is the nicest and the most important (featured image). Indeed, it is considered the most important Taoist temple in the whole southwest China and a national treasure, with a history dating back to the Zhou Dynasty (1046 B.C to 249 B.C.). Here, the most integrated collection of Taoist texts is conserved.

There is even a legend regarding Laozi (the founder of Taoism) and Qyngyang Palace, as it seems it is the first places where Laozi fully expounded the text of the Tao Te Ching. Since then the Palace has been regarded as a gathering place for immortals.

It’s a relatively big complex and can be visited in an hour or so, with several temples and areas for people to live in as well. It’s surrounded by peaceful greenery and the emblem of the Tao, the Yin and Yang symbol, can be seen all over the place. You can see here many people praying by offering candles and joss sticks, and by bowing in front of the many golden statues inside the temples. I even seen some chanting from what I call monks, although I am not sure this is the proper way of calling them. Perhaps they are called priests.

And this is one of the problems of this place. There are no explanations, especially none in English. It’s a pity, but if you are interested in understanding something more about Taoism, then here you won’t get satisfaction. Really frustrating.


It is actually a general thing in China, in all places of culture. Sometimes there are explanatory panels with some information about dates and dynasties, just a little history. But otherwise they go on describing in words the structure of the building you can see with your eyes. Nothing about the meaning of what you are seeing.

So, the only thing I could do was to observe. I have written down some extra thoughts about this.

Last point on Chengdu city, and one of the most known facts about it, you can visit Chengdu giant pandas breeding centre (actually in Dujiangyan), which is reachable by metro. However, it is not the only way to see pandas.

I have seen Pandas in the Wolong breeding centre, in the natural area which carries the same name, for example. I have described all the options in a separate article, including some additional thoughts about these breeding centres and how I felt when I visited it.

THREE THINGS TO DO JUST OUTSIDE CHENGDU

As a last point, what to do outside Chengdu. There are three points of interest I went to visit.

One is UNESCO heritage Leshan’s giant Buddha statue, the tallest in the world with its 71m. The town is reachable by fast train in 40 minutes from Chengdu, or by bus in a couple of hours. The entrance to the hill where the statue has been carved in cost 80 Yuan, €10, and it has also some pagodas and Buddhist temples to visit. The temple is very nice, with a lot of Buddhist iconography and many Bronze, wood or stone Buddhas statues.

The giant Buddha was built during the Tang Dynasty (618 AD 907 AD), it is carved facing the water where three rivers encounter each other, right at its feet.

Most importantly it faces the direction of another UNESCO heritage site, Mount Emei, a sacred Buddhist mountain. This is the second point of interest I visited outside Chengdu, while the third would be Mount Quingcheng, also UNESCO-listed and considered one of the birthplace of Taoism, other than home to Dujiangyan Giant Panda Centre, better knows as the Chengdu centre.

I provided information about visiting these two sacred mountains, and my perceptions of those experiences, in a separated article.