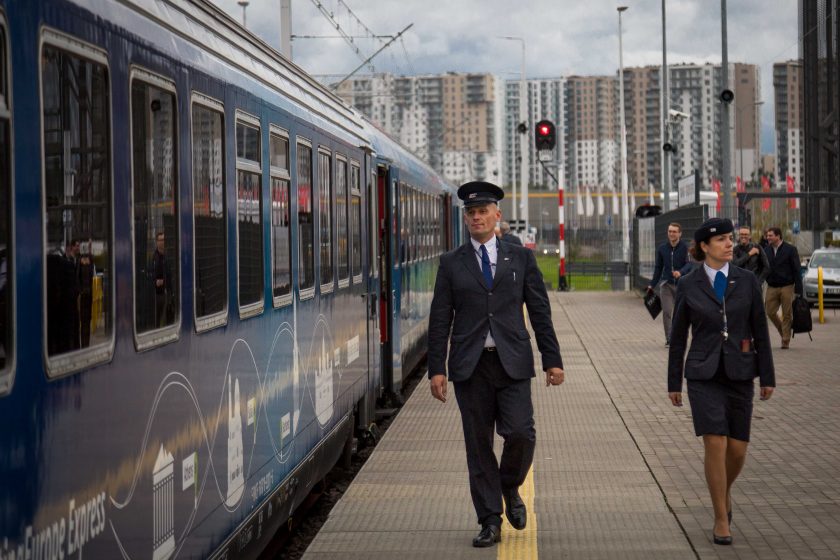 Where there are two Connecting Europe Express around the Baltic Sea, I am impressed about Gdansk, and I take another ride down the historic memory lane.

Yesterday, after leaving Warsaw, we arrive in Gdańsk late in the afternoon. A relatively quick welcoming event takes place at Expo Station with speeches and exchange of flags, then we go look for a taxi.

We are quite far away from the city. The Connecting Europe Express stops here because a big railways expo (I guess that much could be inferred by the name of the station) is taking place right outside the station the following day. These events are important for the industry, this is where products, services and new machinery are showcased and contracts are signed.

I will not go, although I know some of my colleagues on the train, more railways industry enthusiasts than myself, are looking forward to it. I am happy with what I am seeing and learning about trains so far. I saw some super-duper locomotives on the outside though, I am told some of them are hydrogen-powered. The future is here.

On the way to the city centre, I notice on my left a huge space, with dozens of cranes scattered all over the landscape. The sun is going down, providing its warmest colour, it is beautiful against the backdrop of such an industrial view. I wonder what kind o place it is while I am thinking it would make a magnificent photographic project for at least a couple of photographers we had on the Connecting Europe Express, Joao and Albert.

It’s even more intriguing after I learn about the site the following day. A young receptionist working at the hotel where I am staying tells me that it is a shipyard. My father still works there, he says, once it was one of the biggest shipyards in Europe, an important industry for Gdansk, providing a lot of jobs. It is also famous, as this is the place where Lech Walesa, the leader of the Solidarnosc movement, and his followers started the fight against the communist regime.

The shipyard is getting smaller now, and part of it is sold for the construction of big glass buildings. However, the original buildings must be maintained as they are to preserve the memory, and the European Solidarity Centre is located right next to the entrance to Gdańsk Shipyards. It is a futuristic 5-storey building which houses a permanent exhibition about Solidarnosc, as well as a library, conference rooms and reading rooms.

Then all of a sudden I realize that if there is a shipyard, there must be a sea too. I completely missed it! We are one step away from the Baltic Sea. That’s why it is kind of cold, it seems only yesterday we were wearing a T-shirt and had the air conditioning on. Well, it was kind of yesterday. But we have already arrived in the north of Europe.

We will leave only at 5 PM today. That is because for day 20 the Connecting Europe Express doubled, and another train is covering the three Baltic States on the Baltic gauge.

Remember on Day 3 post when I talked about the three EU gauges? Well, if you don’t feel like going back there, I’ll sum it up again, skip the paragraph if you know. So, the Connecting Europe Express isn’t one train only, it is three trains.

The reason is that the whole of the EU does not make use of the same gauge, which is the spacing of the rails on a railway track. In other words, trains don’t run on the same measure of rails. There are three gauges the Connecting Europe Express will ride on: the Iberian which we have run on the first two days, covering Portugal and Spain; the so-called Standard, covering most of EU countries; and the Baltic.

Today, another train left Tallin in the morning to reach Vilnius at 9 PM, passing by Riga. But I am not on that train, so I won’t write about that stretch. I am hoping, and officially inviting Marit, a colleague who took that ride today, to draft a post. The blog wouldn’t be complete without 🙂

As for me, I’ll go back to Gdańsk’s story to say this: I am impressed! The town is unexpectedly beautiful. I don’t know why unexpectedly because I knew absolutely zero about it. All along the streets, squares and canals that cross the town centre, lots of cute colourful houses are lined up, one leaning against the other in a long line. The main cathedral is quite imposing, with a strange side entrance featuring a clock as if it was the main one, a large bell tower and six thin and asymmetric pointed towers pointing to the sky.

Gdansk is known to be the city of amber, so there’s a lot of jewellery shops around its streets. The density of restaurants and bars then, both local and international cuisine, is astonishing. All in all, it gives out a modern vibe, just outside the centre there’s a couple of huge malls with fashion shops. But I didn’t miss my occasion to try a couple of traditional Polish dishes, such as Pirogi, and roasted pork with beetroot.

I would have loved to stay longer to be frank. Perhaps visit the Solidarnosc museum, and take photos of the shipyard at sunrise, and go check out the Baltic sea. Unfortunately time is limited. Ah time, time, time…

Also because I had to spend the morning doing my laundry. Remember in Day 5 post, when I extensively talked about the laundry issue? I think I can easily summarize it with this statement: “one cannot have 36 pairs of underwear”. So, despite me, I had to look for a laundromat.

I tried with the hotel, but as usual the only express thing around here is the Connecting Europe train. So they sent me to a mall, where a very young lady tells me they take clothes only on Thursdays. Mmmm… I hope their business is doing well. Finally, desperate, I decided to ask the only being, almost a god-like entity that I was sure would help: Google.

So, I found a nice and super-efficient, credit card accepting laundromat. This was located in another, bit smaller shopping centre where, in the meantime, I could have a proper coffee and buy some French bubbles for Yvonne’s birthday, our train assistant. Celebrations are upcoming, I hope.

We go towards Bialystok, it rains outside. Yes, we are in the north. The night is almost here.