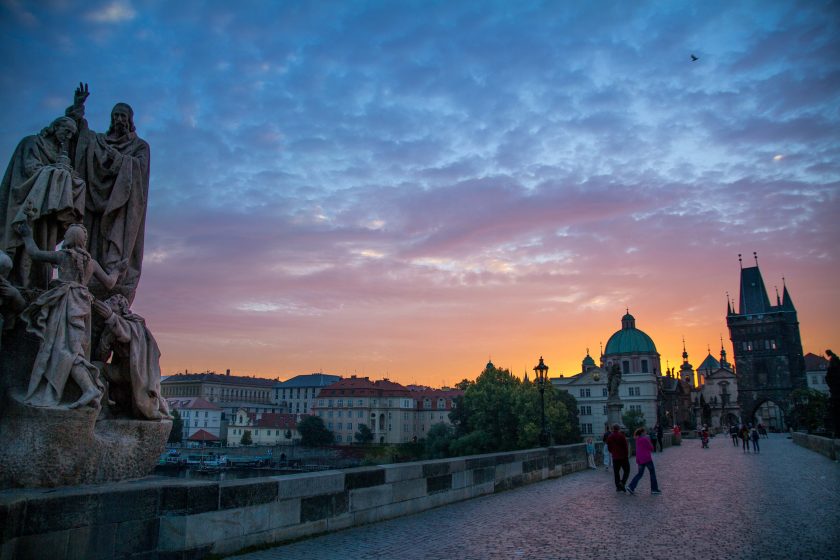 Where I talk about photographing the sunrise, cross border rail connections, and the Connecting Europe Express enters its 20th country, Germany, on election day.

Sunset in Prague wasn’t as good as I hoped for, not so much for the sun as much as for the sheer number of people around town. Wow! But it’s just natural, it was a perfect day and a Saturday. In the end I got to this cute spot with friendly otters, ducks and swans down to the Vltava river, and took a few shots from there. Then went for dinner with colleagues.

While we were having fun, Libor, the brain of the Connecting Europe Express, was at the workshop with the train. They have become inseparable, almost merged into a unique being. Luckily for us and our magnificent journey.

He was there late at night to switch the coaches around and put them in the right position. Because it so happens that, loose a car here change a loco there recover a car in another place, we didn’t manage to have all the cities on the train’s external visual in the right order so far. Now we do. Libor forever!

The operation is kind of interesting as the coaches are put on a bit rotating mechanism as necessary. Must have been fun to watch, too bad I wasn’t there.

This morning I wake up early. There were clouds last night and I have the feeling sunrise is going to be a blast, and that’s when you want to be on Charles Bridge to shoot with your camera. Good morning light, hopefully a great sky, and very few people around.

So I wake up at 6h30, as sunrise should be just before 7. I am not wrong, as soon as I step out of the hotel I see an overwhelming pastel pink sky covered with rows after rows of sheep-shaped clouds.

It’s incredible, the perfect sky. Only problem, I am late. If the sky is like this now, in 20 minutes time when I’ll get to the bridge light will be already much stronger. Unfortunate, but my bad. I should have started earlier, get there in the dark, and wait. I still manage to take some decent shots, but trust me when I say it could have been better.

After my early photo shooting of Prague, I run back to the hotel and to the station for our departure. We head for the last stop in the Czech Republic, Plzen.

In this segment, they stuff us with food as usual. This time is Schnitzels, an avalanche of them.  So we start the daily exercises for our stomachs, because “the food shall be eaten“. That’s a rule on the Connecting Europe Express that no one dares to put in doubt.

We also host the winners of the Krizem Krizem competition, basically a 24h long competition for rail enthusiasts, where teams receive points for the distance travelled by train and for completing some tasks in a place or in another. It is organised by a scout group and participants are normally very young. This year edition is perfectly timed with the EU Year of Rail. It felt just right to have them on the Connecting Europe Express.

After Plzen we enter Germany for the first time, our 20th country! 20 countries in 25 days. I have to repeat it in my head a few times to realize the scope of this journey.

Today, by chance, is also election day in Germany. Although I don’t follow closely German politics, everyone knows that Angela Merkel is not running anymore. Important elections then. After 16 years Germany will have a new Chancellor, and this is something that can influence the future of the EU.

So, chance had it that the Connecting Europe Express, and everything it represents in terms of connecting the continent and its people, moving goods and contributing to the sustainable future of Europe, enters on such an important day.

I mean, Prague and Munich are two cities of major importance in Europe, and some parts of the segment are not even electrified. It takes 5h30 at best to cover it, while it takes only 4h to go from Munich to Berlin for example, which is much wider in terms of distance. It doesn’t help that at every station where we stop the locomotive has to go from one end to the other of the train as we are changing direction.

Electrification is surely one of the problems. Diesel locomotives are simply not acceptable anymore in Europe in the 21st century. But in general, the whole infrastructure of this connection needs an upgrade in order to increase speed and efficiency. But above all, this kind of big infrastructures projects need intention, will, commitment by the part of both countries, whichever authority is involved, in order to be realized.

A train line between Prague and Munich should be competitive in terms of timing and cost with flying. Only then the gap on this important railway corridor in central Europe can be considered closed.

While I reflect upon these important matters, we arrive in Shwandorf, where immediately we spot a lot of trainspotters as we enter the station. There is a nice backdrop with a castle. We are welcomed with the Hymn to Joy played by a small group of musicians dressed in traditional Bavarian clothes. The exchange of pennants takes place in a nice and cheerful environment.

Because of the above-mentioned elections, we do not expect authorities to be at the station today. However, in Regensburg (where there is a beautiful Cathedral that we don’t have the time to see) the exchange of pennants takes place. In Munich, the official event will happen instead tomorrow morning at departure. Fair enough.

This means some more time at my disposal in Munich. I am looking forward to my beer.