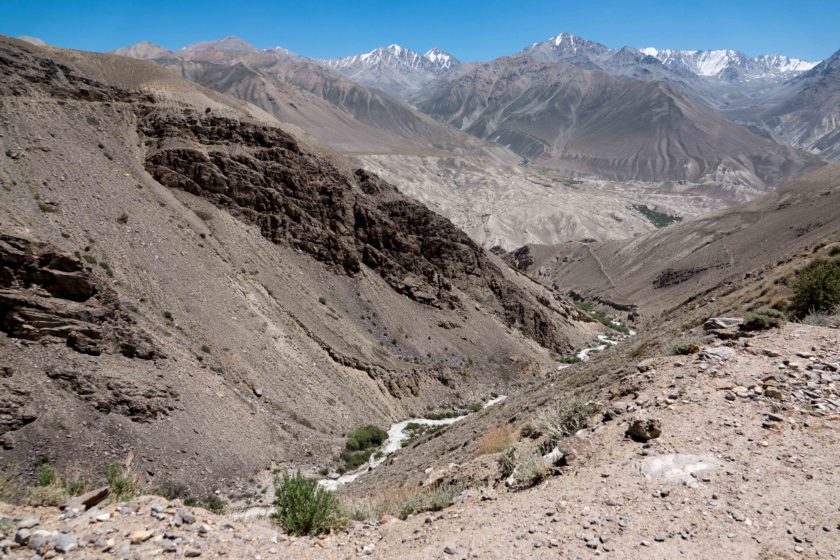 A splendid and breathtaking detour from the Pamir Highway along the border with Afghanistan. The Wakhan Corridor transpires power from every pore.

Shortly after Alichur Village, we take a turn on the left, leave the Pamir Highway behind us, and enter the Wakhan Valley. From now on, and for a few hundred Km, the Afghan border will be right there, on our left side.

This part of the Wakhan Corridor marks the border between Afghanistan’s Badakhshan Province with Tajikistan’s Pamir, although it extends further East to effectively separate Tajikistan from Pakistan as a cushion. It was established in 1893 for political reasons with an agreement between the UK and Afghanistan. Apparently, it is also part of Marco Polo original route on the Silk Road.

The deep gorge along the corridor gathers many rivers in one infuriated stream of muddy waters which roar in continuous impressive rapids. It would be a challenge for any professional to try and ride this river. I wonder if someone has it in mind.

The river is clenched in between barren, colourful mountains, with screes and precariously balanced rocks scattered everywhere. Only from time to time the gorge gives a way to more green and fertile valleys.

The first part of the road however takes the breath out of you for how narrow, high and exposed it is. It is a dirt road of course, where even our four-wheeler drive has to carefully manoeuvre. Looking down on the riverside is guaranteed vertigo.

Settlements exist only where the road goes lower and the valley grows larger, and it seems that time has stopped there. There’s no mechanization of work. Possibly, most of the people here have never left the valley in their lives. It seems on the two sides of the river life goes on symmetrically, with the same methods, the same food, the same needs. But two different countries.

The region is still relatively untouched by tourism, and everyone has to rely on homestays for their passage. People are welcoming but of course they don’t speak English, so unfortunately communication is hard aside for what can be communicated with gestures and smiles.

The food is simple, tasty but a little repetitive. Homemade bread and jam, some kind of soup with a few pieces of meat, some kind of rice or potatoes with some pieces of meat. Very little veggies and basically no fruit at least until the town of Khorugh.

It seems like everyone owes some sheep, goats and donkeys, they are just part of how things work here. They help the work and often we saw kids playing with the animals, or with us. Kinds wave their hands and shout many hellos to us, sometimes they accompany us for a while if we are walking. They are genuinely curious, they never ask for money.

We spent two nights in Wakhan Valley. One in Langar, where a trek to Engels Peak is possible. Then we stopped in Yamchun, where you can visit the fort by the same name, and, the icing on the cake, go relax to some very nice hot-springs.