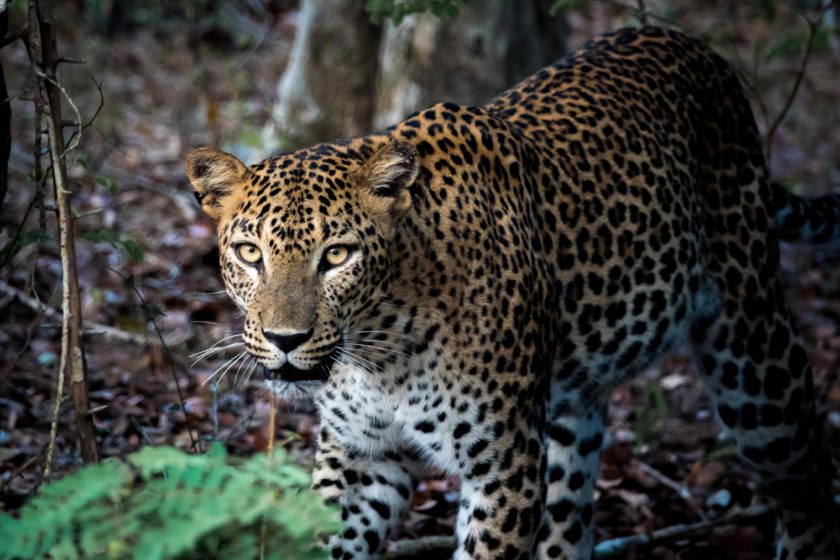 Yala, Wilpattu and Minneriya are the best national parks to visit in Sri Lanka for one reason: if you can visit all three you are almost sure to spot all wildlife the country has to offer.

Sri Lanka is a small country, but there are so many things to do and see: it has a culture that goes back millennia with eight UNESCO heritage sites; some of the most amazing coastline for surfing, kit-surfing, whale and dolphin watching; some incredible hikes through tea plantations, high plateaus and forests; and a lot of national parks and wildlife. Pretty incredible!

I have visited some of the National Parks, and these are, in my opinion, the best three to combine in order to maximise the chances to spot as much wildlife as possible, including the elusive leopard, big families of wild elephants, and the shy sloth bear.

Yep, Yala is busy, there can be between 200 and 400 jeeps inside the park in one day. Nope, Sri Lanka is not like Africa, if you have ever been there, where the spaces are so vast that you kind of feel you are the only one around. Sri Lanka is small and very touristic. BUT, I have one word for Yala: wow!

I have been trying to see leopards all over Asia and Africa, I went on safaris and I stayed in jungles, sometimes for a long time. I never managed. I saw lions in Namibia, and tigers in Nepal, by foot no less, which was pretty cool, and I knew the leopards were there too, but they never showed up.

In Yala NP I saw three in one day, one of them (featured image) just crossed the road in front of us, two metres from me, and it was a really big emotional moment for me. Furthermore, in that specific instance, there were only two jeeps around other than us. Lucky.

Just for this I would say go. But that’s not all. We saw a sloth bear, we saw elephants, we saw a snake, crocs, monkeys, wild pigs, mongoose, buffaloes, deer, hornbills, eagles, kingfisher, pelicans and all kind of birds, we even saw a dung beetle. Alright, it was a lucky day, we saw everything, which is not always the case, that’s why I am suggesting to go to two other places further below. Yet, this should be enough to convince you this is the best national park in Sri Lanka, right?

Oh yeah, I almost forgot, it is also a beautiful corner of the world in terms of landscapes, and you most likely have lunch on the beach.

Yala is the second biggest national park in Sri Lanka, and it is located in the South East part of the country, close to the town of Kataragama, where there are many accommodation options. We reached it by car, but I assume it can be easily reached via train or bus, or a combination thereof.

You can check this post about transport in Sri Lanka as well.

As for the costs, as usual, the more the merrier, meaning the cost of renting a jeep with a driver will be split. Jeeps normally carry up to six people. A funny thing is that the entrance to the park, here and elsewhere, also cost less if you make a ticket for more people. It doesn’t make any sense but that’s how it works. In the end, it will cost between 40 USD to 80 USD per person depending on how many people. There are also luxurious options nearby the park, but I don’t know what they do differently.

There are so many operators and I can’t suggest one in particular. They call each other when they spot something big, and then they start driving like madmen in the middle of the park to reach the spot before the others. They do it for you of course, in order to give you a chance to see, say, a leopard up close. But I really don’t like this, just like I don’t like it when they chase up blue whales in the oceans.

In the end, the best moments were just pure luck, our driver (well done from him) saw some peacocks suddenly changing direction on the road, so he stopped as he thought there could be something lurking in the bush. And he was right, a female leopard (featured image) was just there, a couple of metres from us. We were lucky, we didn’t have to chase any animal, and we enjoyed those 30 seconds of pure feline beauty crossing the road basically just for ourselves, before she disappeared again in the bush.

The same thing happened with the slot bear, we were just trying to watch some birds, and there we see it, far on the road, looking at us. We were the only jeep around. Few seconds and he disappeared. That’s how it should work. Many other times I wasn’t so lucky and it was fine anyway, the fun is also just in trying.

Wilpattu National Park is the biggest NP in the whole country, and it is located in the central western part, not too far to reach from Colombo really.

There are two places where you can stay to organise a safari in the park. The first is to use an entrance on the south-west side, very close to the sea and to Kalpitiya. The second is to use the entrance on the south-east side. This is the most common option, and the one I recommend for the simple reason that there are more options for accommodations there, and more probability to team up with someone else to share the costs for the safari.

If you are travelling by bus, when you will be in Puttalam some people on the street will try to tell you to remain there and organise the safari to Wilpattu NP from there. However, while the stay would be cheaper, the safari would cost the same, and frankly speaking the area outside the park entrance is just as beautiful and worth a visit on its own.

I stayed in a guesthouse in the area, and I went for a walk in the afternoon and around sunset in the surrounding countryside. It was a big highlight of my two days stay.

Indeed, the safari does not change at all, it doesn’t matter on which side you get in. It doesn’t matter who you do it with neither, they all go to the same places, they are all kind of in contact with each other and they tell each other if they have spotted something big like a leopard or elephants, they all go to the same breakfast and lunch areas.

So, the only thing that changes is really the price, and that depends on how many people there are on the car, and a little bit of negotiating skills. In any case, it can range between about 40 USD up to 80 USD or more per person for a full day safari. As usual in safari places, there are luxurious and super expensive options too.

As for the park, I found it really beautiful! It is totally worth going for the full day to try and maximise your time there and what you can spot. The whole range of Sri Lankan wildlife lives in Wilpattu, including elephants, leopards and sloth bears, which are normally the tree species most sought after.

However, it isn’t easy. On my day there we just missed the elephants; we saw a leopard but from very very far, only through binoculars; but we saw a sloth bear mother with her cub from really close, the highlight of the day, and towards the end of it. Otherwise, we saw many crocs, many different types of birds, mongoose, spotted deer, buffaloes, monkeys etc…

All in all, Wilpattu is one of the best places to visit for wildlife spotting, and because most of the people head south for national parks, here there’s a little less traffic and jeeps around. I believe there were like 25 to 30 jeeps on the day I went in, nothing compared to the 200 to 400 you might come across in other National Parks such as Minneriya or Yala.

THE ELEPHANTS OF MINNERIYA

Located nearby central Sigiriya, UNESCO heritage site and eighth wonder of the world,  Minneriya National Park can easily be considered a day trip from your stay there. A good immersion in nature after a bit of culture.

I’ll be honest here: Minneriya is not a beautiful national park as such, especially if compared with others in Sri Lanka, nor it is the most diverse in terms of wildlife. In fact, there’s very little diversity. Furthermore, there’s a lot of people, the day I was in at least 200 jeeps.

BUT, and this is a big but, it is most likely the best place on the whole Asian continent to see big families of wild elephants.

There’s as many as 300 or more elephants in the park, and it is very easy to see them. I have seen at least 60 elephants the day I went in. So, if it is the elephants you want to see, I do recommend doing a safari in Minneriya. Any guesthouse would organise it for you, or you can also go straight at the entrance and some tour operators will be happy to receive you.

The usual rule applies: the more people on the car the less expensive the safari. Otherwise, it is kind of the same price of all the other national parks for the entrance ticket and the rental of the jeep with a driver. In the end, it comes down to something between 40 and 80 USD per person. It doesn’t really matter who you do it with, seeing the elephants is easy and the jeeps all follow the same routes.

I really believe by visiting these three national parks, Wilpattu, Minneriya, and Yala, respectively located in the centre-north west, centre, and south-east part of the country, the chances to see pretty much everything Sri Lanka has to offer in terms of wildlife are very high.

Between one park and the other, don’t miss the chance to visit the rest of this beautiful country. If you are looking for ideas, here is a complete two weeks itinerary which includes many highlights.