Long, beautiful white beaches, good food, cheap, Isla Margarita is a place to relax and have a good time, and offers plenty of activities and distractions such as horse riding, swimming with dolphins, or visiting a hippocampus infested mangrove forest 🙂

It’s such a delicate animal, so transparent you can actually see the hearth. It was released immediately after this image was captured of course.

It’s kind of a dry description, but we were there mostly to relax after the Mount Roraima trek and before returning home to our jobs. So that’s what we did. I also have very good memories of course, but less linked to the place itself.

One funny thing is that we tried (well I didn’t but some of my friends did) to go to Los Roques from there. It’s possible with some very small airplanes, sometimes with Chestnut flights. However, the flights’ schedule in Venezuela is flexible to say the least. It goes pretty much like this: if they are full they fly, otherwise come back tomorrow. 🙂


We had already noticed in our way to Roraima that airports didn’t work on tight schedules. But we managed to go where we had to go. The attempted fly to Los Roques just didn’t work. For three times my travel companions woke up early in the morning to go to the airport and catch a ride to the tropical paradise, and as many times they came back a few hours later with disappointed, dark expression painted on their faces. Now they can laugh about it, more or less. So, no Los Roques stories to tell. 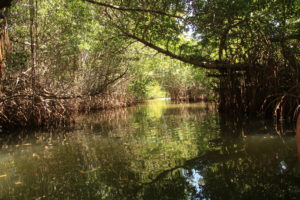 Another interesting aspect of this country was the government propaganda, posters and banners all over the place, and the long, very long, timeless speeches of the now deceased former President Hugo Chávez. One day we were in a car and he was speaking on the radio. So, after a while we switched the channel, and he was there too. We switched frequency again, and there he was. He was everywhere. I believe he was capable of speaking the whole day without interruption. About what, I can’t remember.

One last thing we had noticed in Venezuela was its richness in natural resources. A lot of oil, I remember a full tank of gasoline would cost like 50 Euro cents. Also a lot of water, which makes it very rich in hydroelectric power. Potentially this could be a very rich country, it’s a pity the economy has always been badly managed, and the wealth badly distributed. The discontent of people was palpable, although no one would dare to speak of it out loud.