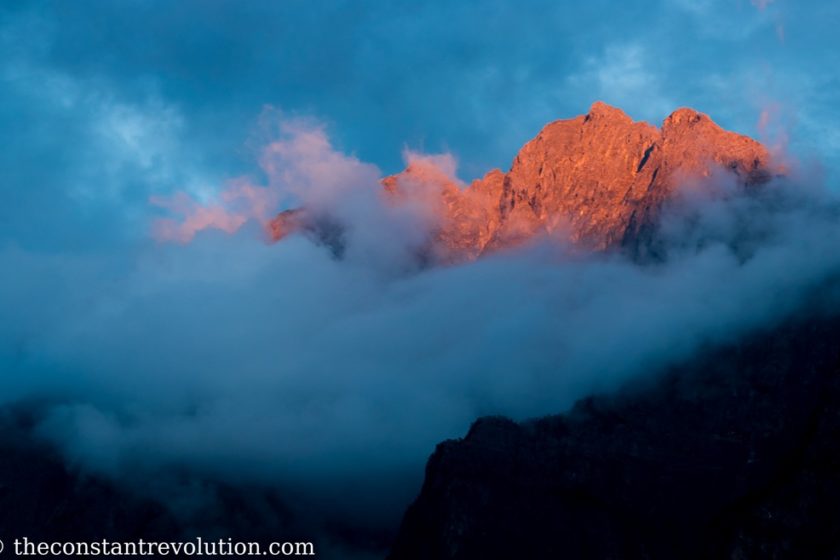 A spectacular two-days trek above and along the deepest river gorge in China, with a drop of 3,900 m from the mountain peak to the river bed. Here’s all you need to know about it.

If you are travelling in north-west Yunnan, between Lijiang and Shangri La city, you can take a detour of a couple of days and hike along the valley that hosts the famous Tiger Leaping Gorge.

I admit it, I was a little skeptical about this trek, as it is short and very well known as a touristic place. I thought it would be easy and not that beautiful, but I was wrong. It is totally worth going, the steepness of the gorge is spectacular, and the hike along the valley and above the gorge provides really beautiful views. Furthermore, most people go straight for the gorge and do not hike up above, which is the best part. So, the hike is not too frequented.

HOW TO GET THERE AND EQUIPMENT

If you are moving from one place to the other with a big suitcase or backpack, obviously not needed for the trek, no problems. You can ask your transport to drop it at Tina’s guesthouse, and they will keep it safe for you to pick up after the trek.

As for the equipment, no need to bring a heavy backpack. I did it with a 20 litres pack. I had a change, the usual personal hygiene stuff, a fleece, and a light water resistant wind stopper with me, no need for a down jacket in September. Perhaps better to have it in winter, not so much for the trek as for the night at the guesthouse. The trek reaches about 2,700 m. in altitude, and it isn’t that cold.

I would use proper trekking shoes, although I have seen people doing it with sneakers. Bring your bottle of water of course, but don’t worry about food and water. All along the way there are people selling dried fruit, water, tea, local fruits, and, most importantly, marijuana.

Once at the entrance of the park, a fee of 65 Yuan needs to be paid. Then, you can start the trek right away. There is no need for a map, the trail is quite easy to follow. The indications are on blue panels with arrows pointing both ways and translated in English. Do not follow any other indications.

The trek lasts between 6 and 8 hours until the guesthouse, depending on your pace and physical conditions. It follows the valley with the Gorge and the river on your right side, as well as the Jade Dragon Snow Mountain.

Some reviews report the Jinsha river to have clean turquoise waters. It wasn’t the case when I was there though. It had been raining a lot in the previous days, and it would have continued for the days to come. So, the river was aggressively displaying brown muddy waters. Despite so, I was very lucky and didn’t catch any rain while trekking.

For three or four hours the trail goes up with some steep passages. The first part is not really great, there are works going on along the river and some noise. But after a couple of hours you are high enough to muffle the noise, and the serpentine trail starts opening up to some pretty great views.

In the following three of four hours the trail is pretty flat, with small ups and downs. The beauty of it is that until Half Way, and as you go deeper into the valley, the view becomes better and better at every turn. All in all, it is a nice full day of fitness, but it isn’t very hard, or very high.

The arrival point is not exactly halfway of the trek, Half Way is the name of the most known guesthouse in this small mountain village, and the one that I recommend. The prices are good, there are both private rooms and dormitories. The food is fine as well, but most importantly, there is a huge terrace with a magnificent view on the steepest of walls, and the gorge. If you get lucky, as I did, you might have a free view of the summits at sunset, when the rocks take an intense red colour.

It takes only a couple of hours downhill to go from Half Way to Tina’s guesthouse, where you might have left your luggage. Tina’s is basically on the valley’s main road, and it can be reached by car without any problems instead of trekking high above the valley, if you so wish.

Here you can rest, have food, wait for the bus to take you to your next destination (at 15h30), but you can also go down the Gorge, until the river bed, and get to see the Leaping Tiger rock.

And here’s the time for a small digression, why is it called Tiger Leaping Gorge?

The legend goes that a hunter chased a tiger through the gorge until they reached its narrowest point. The tiger found itself trapped on a rock between the hunter and the river. Death was almost certain. So, left with no choice, the tiger tried a leap of 25 m. from the rock to the shore on the other side, saving its life. Today, although there is no clear agreement over which rock was it, the rock from which the tiger made its jump has become an iconic viewpoint.

End of the digression. Be happy 🙂

Tina’s provides transport to get to the beginning of the trail for free. However, there is an entrance fee of 15 Yuan. Then, when you are almost at the bottom, there is another fee of 15 Yuan to pay to approach the river, which makes no sense at all. Then you need to pay another 10 Yuan to walk on the bridge that leads to the famous rock, which is outright ridiculous. I didn’t pay for it.

It takes between two and three hours to go down to the Gorge and come back. The path is steep and mostly made of big steps. It can also be done as a loop, but be aware that to come back on the other side there are some vertical ladders to climb, with no protections. And you need to pay an additional fee, it goes without saying!

Anyways, it is worth to go down to the river. When I was there, there was a lot of water and the rapid looked really scary. The canyon is as narrow and steep as it gets, I doubt there are many other places that steep in the world.

In the end, back to Tina’s, and on to the next destination.