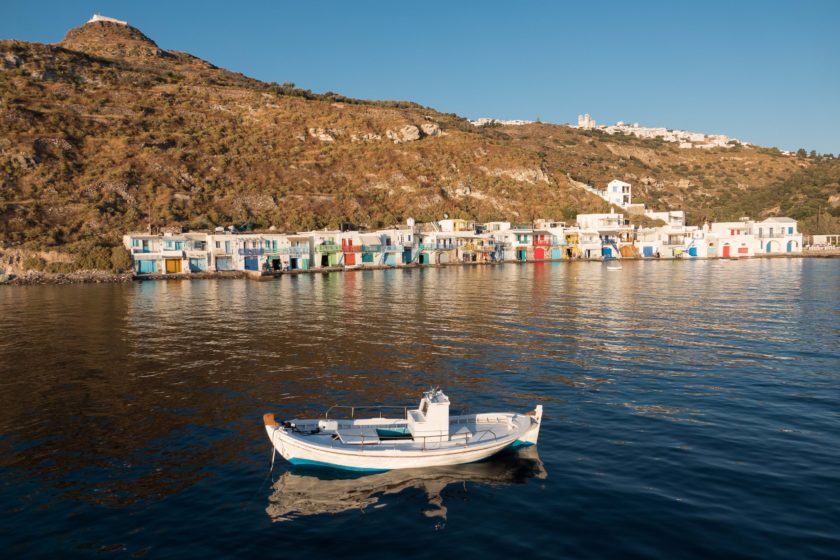 The Queen of the Cyclades might well be Santorini, but the King is without a doubt Milos. And here’s why.

At the southernmost edge of the Cyclades group, there’s an island that everyone knows, everyone loves, and everyone talks about. It’s Santorini, the mecca of Greek holidays, the Queen of the Aegean sea, an infinite source of perfect Instapics for wannabe holiday influencers. Many people, especially Asians, choose Santorini to celebrate their wedding and snap some unforgettable shots with those robes they’ll likely never wear again.

So, is Santorini that good? To be honest, in terms of aesthetics, yes, they are all right. This island is something unique indeed, with its white villages castled on top of high vertical cliffs, from which you can admire the most colourful sunsets or just take long walks through the narrow streets.

If you want to treat yourself, many hotels provide cliffs and sunset views on small private jacuzzi on the terrace. But if you want to live Santorini at a lower cost, that is also possible on the opposite side of the island, where the sun rises, and sandy black beaches or smaller quieter bays can be used to swim in the beautiful crystal clear waters.

Yes, yes, amazing. BUT, Santorini isn’t the only island of the beautiful Cyclades, and for every Queen in this world, there must be a King. That king is, in my opinion, Milos, which might not compete with its spouse in terms of sheer beauty and photogenic landscapes, but its a much more diverse, interesting island to visit.

Milos hides real treasures around its shores: white cliffs formations with deep inlets, offering many jumping points for the amusement of brave divers, like famous Sarakiniko; quiet small coves, to be found all around the islands where you’ll have the chance to find yourself on your own enjoying the mesmerizing sound of the ocean waves;

amazing caves and rock formations on the sea, like in Kleftiko, reachable only by boat; the incredible Kalamos beach; the old sulfur and iron mines now dismissed;

red cliffs, white cliffs, and black cliffs, with the most unusual shapes and some incredible volcanic formations; and colourful fishermen villages (featured image). There’s really everything.

I mean, and I really mean it, I have never taken so many photos of an island as I have taken in Milos. Much more than Santorini, which despite its beauty, it’s kind of always the same. If you have time you can move around Milos by car or by bus, or sometimes even by foot. But if time is an issue, then the best way to enjoy the island is to take one or more boat tours, which will take to see all the highlights.

In the end, I’d say that visiting both Santorini and Milos is the best thing to do, but if I had to choose where to spend my time between the two, I would definitely pick Milos. It’s just so much more fun!