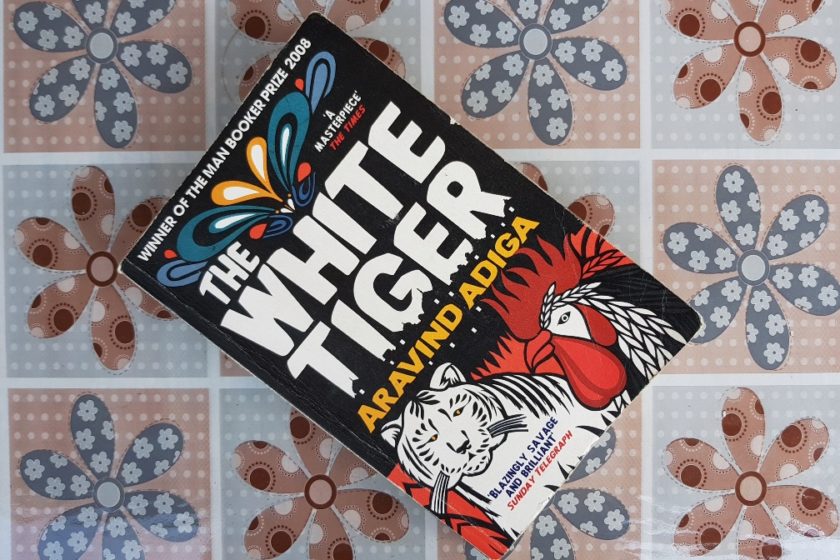 One of my Indian hosts kindly gifted me with The White Tiger, a best selling novel by Indian writer Aravind Adiga. The book is about the journey of a boy born to be a sweet-maker – in a lower caste of Indian society – from a position of servitude to being a rich entrepreneur. But India is not a place where people can move up the ladder so easily: when you are born in the darkness, in order to reach the light might require some very extreme measures. For example, killing.

I could not help but draw a parallel with Dostoevskij masterpiece Crime and Punishment, not so much for the style as much as for the concept, elaborated in both books, that killing, in some cases, might be the right course of action. 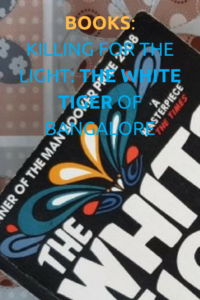 Quite creatively, Adiga decided to use a one-way epistolary style, where Balram, the boy later known as the White Tiger of Bangalore, writes emails to the Chinese Prime Minister, after learning the influential politician is going to Bangalore for a state visit. So, for seven nights he writes these letters with the intention of explaining what it means to be an entrepreneur in India, and how he has become one. In order to do so, he has to tell the story of his life, and explain in many details what it means to be born in a lower caste, and how Indian society works for those who are born there.

The novel depicts with a harsh, crude, powerful, and somewhat humorous style a society divided in two parts, those who live in the darkness and those who live in the light, the poor and the rich, the skinny and the fat, the lower caste and the higher one, without any further subdivision. Balram is born in a poor family in a region not far from Delhi, where farmers, rickshaws, tea shops, carbon and steel businesses, every aspect of the economy is controlled by some local lords. People without mercy, who, not unlike any other type of organised crime, take their cuts and use violence to keep control over their territory. Corruption of politicians and police is just part of the game. Even getting the most humble of jobs needs the lord’s approval.

It’s a system, that keeps people trapped in a “Rooster Coop”, as the White Tiger puts it. Kids cannot get an education as they need to work since an early age for ridiculous wages in order to help the always numerous families. On the other hand, the adults do not have such ambitions for their children, as themselves do not know of the possibilities that could open up for their future. They tend to just do things as they have always done it. Ignorance is the first cage level. The White Tiger realizes it: “Iqbal was so right. The moment you recognize what is beautiful in this world, you stop being a slave. If you taught every poor boy how to paint, that would be the end of the rich in India”

The second level is power and money. People are kept on the verge of survival, with no access to any other means of revenues. The third level is violence. If someone tries to get out of a position of servitude, not only he is punished or killed, but his all family would become involved. They would all get killed, or they would be shamed and pushed out of the community, and forced to go and live in a slum or under a bridge in a big city, begging for food, with no hopes for the future. Following The White Tiger thinking “That’s not much better than being dead”.

Balram is a smart and ambitious lad, and despite all difficulties, he manages to learn how to drive a car, and later becomes a driver for the son of one of the lords. A driver, and a servant, as drivers have also to cook, clean, massage, and respond to every need of their masters. It is truly a master-servant relation the one described in the novel: one living in luxury apartments, the other in the basement with cockroaches; one frequenting malls and fancy restaurants, the other waiting on the street and feeding on the cheapest food; one using is education to humiliate and dominate, the other crouching on the floor on his side, waiting for orders. There is no doubt in both parties minds of the righteousness, and naturalness of their position vis-à-vis the other.  That is how powerful the caste culture is. Having become a driver is already a great leap forward, a much better-paid job than anyone else would have dreamed of in Balram’s family. Yet, it is a servant job, and a servant lives in the darkness, he is a rooster trapped in a coop, just like all others.

It takes time for Balram to realize the full potential of his ambition, to understand how the world in the light works, glimpse by glimpse, to emancipate himself from the mindset of a servant, and, finally, to take action in order to change. A dramatic action, as he kills his master and steals a copious amount of money. With that money he will flee to Bangalore, where he will become an entrepreneur.

So, the novel tells a story of poverty, desperation, humiliation, ambition and the feeling of hopelessness a servant born in the sweet-maker caste carries in his hearth. All servants probably do, but most would just remain servants, some because they lack the wit, many because of the cage they’re trapped in. It takes killing for Balram to get out of the Rooster Coop, to avoid taking the lashes his father took, to become a white tiger. A wrong thing to do, for sure. But the question is: did he have any other option, besides that of remaining a servant?

Dostoevskij made the whole point of his book Crime and Punishment about whether killing could be right, if it was for justice, if it was just getting rid of a bad person. Raskolnikov, the main character of the novel, ponders this idea from the very beginning, and he kills this old woman, a usurer, to prove himself right. However, by carrying out the mischief, he also kills an innocent woman. There starts his long, agonizing inner struggle, which will lead him to turn himself in, and finally to some kind of repentance, and redemption.

The White Tiger does something even worse. By killing his master, he condemns his whole family to death, all of them. He is conscious of it, he knows very well what will happen, that’s how the system works. Still, it takes the decision to go on. He ponders the idea of being a cold-blooded monster, and he uses a story of the Buddha to reply to himself. When the Buddha was asked if he was a man or God by one of his disciples, he replied that he was neither, he was just someone who woke up, while the others were still sleeping. Similarly, the white tiger does not consider himself a man nor a demon, but someone who woke up, while the others are still sleeping. He says a prayer for all of his family, and finds his peace. There is no redemption for him, no repentance.

Raskolnikov was an intellectual, a clever and very opinionated student about how the world should work. He idolized charismatic historical characters, like Napoleon. He wondered why some people could kill millions, and be considered conquerors and liberators, while those who killed one were considered murderers. He believed himself as capable as those emperors, capable of judging what was wrong and what was right, and who deserved to live and who did not. However, he was free. Free to choose to become what he wanted to become, unlike Balram.

Balram does not know about history, or Napoleon, and does not care much about justice either, or being a judge of right and wrongs in this world. He is just a servant, a white tiger in a cage with no doors to open. He does not approve of killing, but he would do it again if it was to break free. He understood that it is likely that every person that counts in this world, in a way or in another, has killed someone on their way to the top. “Kill enough people and they will put a bronze statue to your near Parliament House in Delhi” he says. He is aware of it, just like Raskolnikov, “but that’s glory, and not what I am after. All I wanted was the chance to be a man, and for that, one murder was enough.”

The dream of glory and a misplaced sense of justice is what led Raskolnikov actions. As logical as his reasoning sounded, there was no way his soul could survive the guilt. The dream of freedom and dignity is what leads Balram action, without any idealism. It’s the instinct to escape a destiny already written for him, the struggle to move from the darkness to the light. A much more powerful force, one that keeps guilt away, never to have nightmares, never to repent. He just continues on with his life.

He did learn how business work in this world, and he uses the same practices of his former masters to make his own business work: corruption, and power. But not the violence, especially not the kind of psychological submission masters put their servants in. That’s all the difference, by his own admission. He puts his employees in an open cage, he gives them a choice, he gives them the possibility to observe and learn, and if they wanted to, to be able to make their own life. He does not treat them like family, or friends, or servants, he treats them like men. That’s the only sense of morale the White Tiger of Bangalore has learnt in his way to entrepreneurship in India.

The White Tiger is a powerful albeit cynical novel, beautifully written, even entertaining at times. It portrays without any filter the lives of Indian lower caste, the deep contrasts of an often hidden society to the public eye, pointing out the hypocrisies of politics, and the false promises thereof. A must-read for anyone travelling in India.