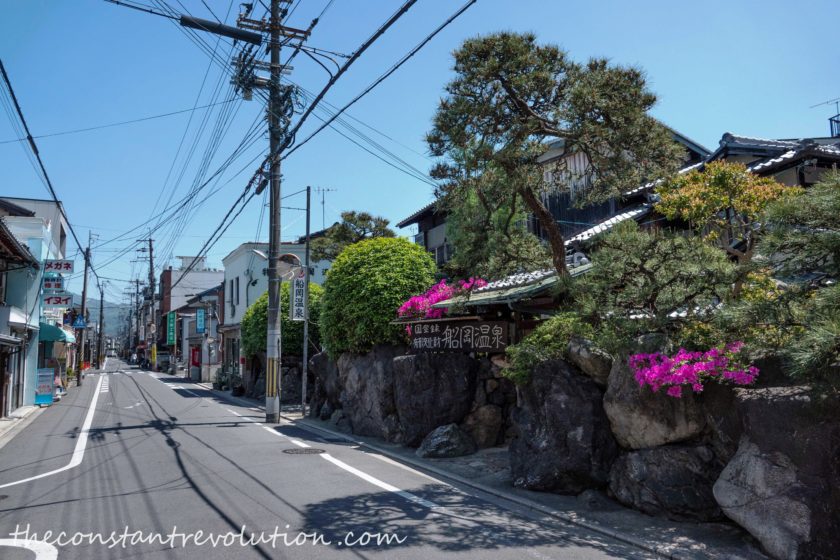 Hiding away from the Golden Week, I have discovered the real Kyoto far from the touristic scene.

I happened to be in Kyoto during the Golden Week, which is a public holiday in Japan. This means that many Japanese are travelling beside the usual tourists, which in turns means everything is extremely busy and extremely expensive!

So, after spending about 70 Euros for a bed in a hostel in the city centre (yes, you read well!!), I ran some online search and found a cute hostel/bar in Kuramaguchi Dori (featured image), a street cutting across a neighbourhood outside the touristic areas. Best move ever!

I’ll be honest, I wasn’t liking it too much in Kyoto. The huge amount of tourists around annoyed me. All there to visit the same temples, walk around the same neighbourhoods, look at the same tea ceremonies, eat in the same restaurants and drink in the same bars.

But when I got to my new place all of a sudden I felt a kind of inner peace flowing in me. I ended up remaining for six days while waiting for the Golden Week enthusiasm to worn out.

The whole neighbourhood is frequented by just a few tourists, mostly Japanese. There are many cute, small restaurants and bars and coffee shops, some parks with shrines and temples just behind the corner where to find some quiet or go for a run, and the Funaoka onsen (featured image), a Japanese public bath, equipped with a sauna.

None of the above is particularly “traditional”. The cuisine is often mixed concepts (I saw the smallest Italian restaurant ever: 6 seats over the bar, Japanese style), the coffee shops definitely don’t originate in Japan although the coffee was excellent, and the onsen has been adapted to accommodate all water temperatures.

But who cares, that’s a regular neighbourhood with a regular life, and a touch of hipster scene I daresay, and that’s the best thing you can do in Japan. I also had a lot of fun at the bar of the hostel with the guys there, the few tourists, and the regular Japanese customers.

Traditional Japan is a big tourist trap. So, here’s the thing, Kyoto is a beautiful city, it is definitely the city of temples, there are so many of them, and by all means do go see the Golden Temple, the Imperial household, the Stone Garden, the Gion Quarter, the Kodai-ji, theTofuku-ji, the Fushimi Inari Shrine and all the other beautiful sites.

But Kyoto is also a city to walk, the more random the better, and discover the current Japanese way of life in local neighbourhoods, but also lesser known temples and shrines with beautiful gardens and greater quiet. Just a few locals doing their prayers and the sound of the bell vibrating in the air.

Finally, a cool thing to do is to try zen meditation at Shunkouin Temple. The chief monk there is a cool and prepared guy! It won’t be just a meditation session, but a conversation over what Buddhist meditation is, and what meditating means.