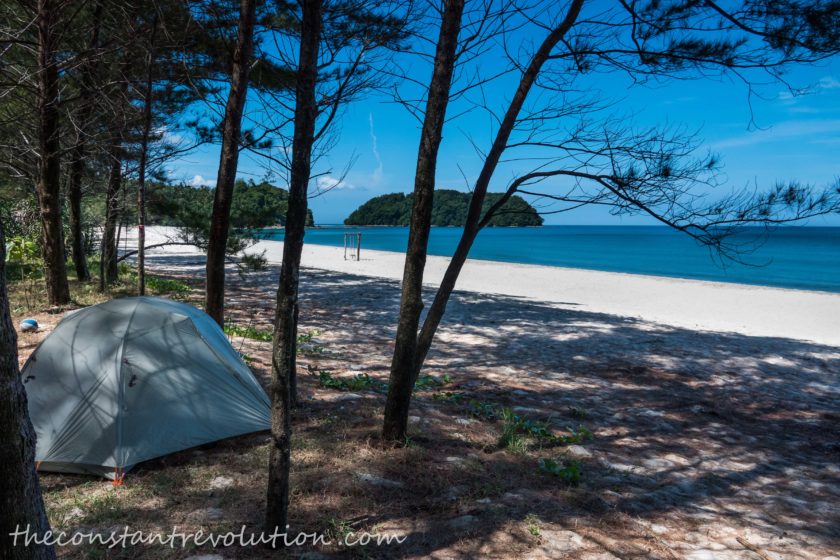 Borneo is surrounded by incredible coral seas, long beaches and islands for some unforgettable scuba diving or, if you know its secret places, to understand how it feels to have the most beautiful beach and sunsets all for yourself. All explained in this post.

I spent most of my time in Sabah, Borneo, volunteering in an Eco-camp along the Kinabatangan River, and having fun trying to capture as much wildlife as possible with my camera. Indeed, Borneo is mostly famous for its jungles and biodiversity, and for some endemic, rare, and unfortunately endangered species such as the orangutan, which tourists are eager to see. This is explained in details in my previous posts.

This puts Sabah in a unique geographical position for exceptionally beautiful and rich coral seas, many small islands to be explored, many isolated and long beaches to chill in complete tranquillity, and some of the most beautiful sunsets you’ll ever see.

As you can imagine, all kind of seaside activities can be found around Sabah’s shores and islands. I couldn’t go everywhere, but I think I have done some pretty cool stuff, and been to pretty cool places, where I could enjoy some of the best beaches I have ever seen in a magnificently tranquil environment.

In this post, I’ll talk first about Mabul Island and Sipadan Diving experience, and then about my wanderings around the Tip of Borneo.

Mabul Island is situated in the Celebes Sea and can be reached with a 40 min speed boat from Semporna, in the south of Sabah, along with many other islands in the surroundings. Most of the accommodations are part of scuba diving shops’ resorts, and there’s only one backpacker option really in the west part of the island, which also offers budget fun dives daily. In any case, accommodation prices range from comfortable to luxurious depending on the resort you book.

More often than not, Mabul is just a compulsory stop to go diving at Sipadan Island, which is another 40 min distance with a speed boat, and it is consistently considered one of the three best diving spots in the world.

I’ll kill the suspense and go on and confirm this. Sipadan deserves its reputation: its a tiny islands surrounded by about 20 metres of shallow coral waters, and then a drop of 600 m. all around. It has been preserved for a long time, so the coral is beautiful, and there’s so much marine life the eyes cannot follow, including many turtles, reef sharks, and the possibility, with luck, to come across pretty much anything that can be seen in the oceans. Just amazing!!

It is also kind of expensive, obviously, and most of the time it comes with a package that includes some other dives around Mabul Island, and a full board accommodation in one of the resorts there. Sipadan itself is uninhabited. Permission to dive in Sipadan is given to only 120 people per day, so book at least one month in advance if you want to be sure to dive there on your preferred dates. If you are trying your luck and you didn’t book, then it is better to ask around the shops in Semporna, not on Mabul Island. That’s what I did and I got lucky. But I was on my own, and I had time.

There are still some differences in prices between shops. The only spot I found was also the cheapest, with a shop called Billabong, but I do not recommend it. The equipment was old and clearly lacked maintenance, it made bubbles all over the place, I constantly had water in my mouth, and during a dive in Mabul I had an accident with a malfunctioning regulator: at one point I stopped receiving air, I had to signal the dive master (luckily he was just at my side at that moment) who gave me his emergency air respirator and we had to go for an emergency exit. Really not cool! Just spend a little bit more money and go with a better and more reputable shop, safety first!

As from April 2019 rules changed for diving in Sipadan: more shops can receive permissions to go diving there, 20 instead of only 7, but for a maximum of two dives per person, while the total number of people per day remains unchanged.

Mabul Island and the nomads of the sea

Yet, a stay in Mabul is interesting. Diving there is not that bad if it wasn’t that Sipadan is just another planet, so the comparison is tough. But I could see quite a lot of stuff in Mabul: big turtles, ghost pipefish, frogfish, lots of the usual coral fish, and the biggest grouper I have ever seen at the former oil platform.

The island is pretty small, it can be walked in 30 min around its perimetre. There aren’t many beaches, especially on the west side where wooden stilt houses, mostly diving shops’ guesthouses, occupy all the seafront space. These are the places where even if you aren’t diving, you can chill and enjoy a nice sunset. However, after a while, it is kind of boring to be in such a small place where there is nothing to do but diving, at least to me.

There are also villagers living on the island, and many so-called nomads of the sea.

Indeed, all around the shallow waters of Mabul, men women and children wander all day long on small boats, trying to sell some fish to tourists, get some free food, or just because that’s how they live their entire lives: on the sea.

These people are scattered all around the surrounding seas, and are stateless, without documents. I understood It is part of their beliefs that life far from the sea is a cursed one. I have been told some of them can hold their breath underwater up to 15 minutes, and some children can see clearly underwater. They belong to the sea.

Their traditional way of life certainly has something romantic to it. However, they hardly blend in harmoniously with their surroundings nowadays, as they also need money for their survival. The small space they occupy both on the island and on the boats is definitely overcrowded, and not in the best hygienic conditions.

It was sad to see all those kids begging for food and even sadder to see tourists giving them packaged shit. It really doesn’t help, and all waste ends up in the sea of course.

Life is hard for people that won’t leave behind their traditions while living in this globalised world. Perhaps once there was a strong connection and balance with their natural surroundings, with the ocean. To me, today, it seemed that is no longer the case, and the nomads of the sea are just a People struggling for survival in an unfriendly world.

THE TIP OF BORNEO

On the opposite side of Sabah, North-East, right where the Sulu Sea and the South China Sea meet, there’s the Tip of Borneo. The starting point is Kudat, the only town around reachable with public transport. From here a private taxi, or if you can with your private transport, will take you to any beachfront destination.

And what destinations! We are talking about beautiful golden sandy beaches that extend for Kilometres without the shadow of bulky infrastructure. Super chill places where you can swim, walk for hours on the beach, and enjoy the most spectacular sunsets!

Few modestly priced lodges can be found at the tip. However, I stayed at Secret Place (that’s the name), a campsite on a one Km long private beach owned by Roby, who lives there with his family. Only camping here, with your own or a rented tent. Roby makes the best food, some creative and tasty cocktails (try the Sabah Libre), and the place is the cheapest you can find around.

It’s just a little bit further south than the tip, but wow! So rare to camp at the beach (see featured image), and in such an isolated and beautiful setting. In four days there I met a handful of like-minded travellers only, otherwise, the beach was literally only for myself. I couldn’t recommend this place more to any traveller!

At the tip of Borneo is possible to do some diving, but frankly speaking, it’s not even close to other sites. I would advise going there just to visit and take it easy for a few days. It’s cool to visit the tip in any case, where the two seas meet.

FROM THE TIP TO KOTA KINABALU

There’s a bunch of islands that can be visited from the Tip of Borneo moving further south towards Sabah’s capital Kota Kinabalu, and even further down until Brunei. All of them offer beautiful beaches, crystal clear waters and nice snorkelling trips with more or fewer tourists depending on the remoteness. Expect a lot of people close to Kota Kinabalu, especially on day trips and tours to famous places such as Manukan Island.

A well-known place, which I didn’t visit, is Mantanani Island, which some have described to me, perhaps with a little exaggeration, as the “Maldives of Sabah”. This and other nice spots can be reached from Kota Belud.

I stopped by, in my everlasting search for the coolest and most hidden places, at Bigfin divers and beach resort. I normally don’t mention specific resorts, but in this case, I have to: one because this is, again, the only place on a whole beach, reachable only by boat, with no other name for it; two because the place is beautifully built and the staff is super nice.

The prices for both accommodation and diving are absolutely affordable, normally included in a full board package, and if you are a budget traveller there is also a camping option (I like that!) in comfortable tents. The equipment for diving is spot on, and the diving sites are fun and exclusive.

The whole place provides isolation and tranquillity. Icing on the cake, UNESCO heritage Mount Kinabalu rises right in the background of the beach and can be admired in all its almighty beauty. I warmly recommend this place for travellers that like to be a little off the usual path.