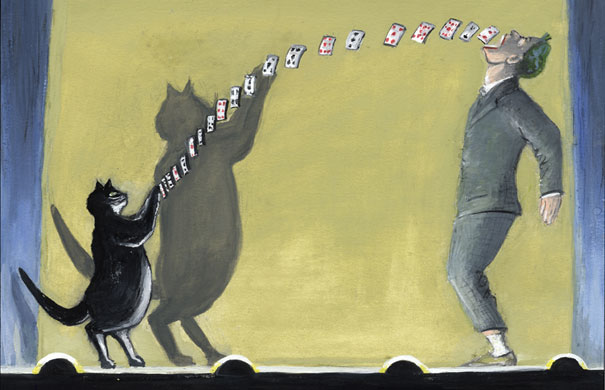 Bulgakov’s book has such an overflowing evocative power it’s like reading a graphic novel with strong esoteric traits. Frightening and passionate, surreal and dramatic, the tale is imbued with diabolically ironic characters, with ascetics, poets and rulers; and with the coarse reality of all human things. It would be madness not to read it.

Satan himself, as Professor Wooland, appears in 1930s Moscow with four eccentric assistants who manage to plunge the city into chaos with effortless and humorous efficiency. Particularly, the illusionist Fagotto and the black talking cat Behemot are an unforgettable cunning pair.

There’s Margarita of course, with her crystalline passion and undying devotion. She becomes a witch and the hostess for Satan’s grand spring ball with the painful task, in every sense, to greet all the scum of human history.

As a reward for going through such an ordeal, Satan grants her the wish to be reunited with the Master, her lover gone missing and author of the book that brought him ruins and madness because of the unfair critiques received. This is an unorthodox account of Pontius Pilate’s story during the last days of Yeshua Ha-Notsri (Jesus of Nazareth)’s life.

It’s around this story from old Jerusalem, which is told in parallel with modern Moscow’s events, that the symbolic bundle of Bulgakov’s novel unfolds.

In it, Pilate understands the enlightened nature of the preacher Yeshua, but he ceases to the reasons of State (or Empire) and he sentences him to an atrocious death, for then being consumed by nightmares, feelings of guilt and desires of revenge.

Cowardice is the worst of sins, these were the last words of Yeshua, be it that of the Roman Procurator of Judea who didn’t save an innocent man, or that of Soviet-era intellectuals who bent their art and nature to the will of the regime.

Bulgakov’s strong, and autobiographic, critique to the hypocrisy of his time’s Russia is clear, and we can’t help but wonder whether modern societies are that much different.

To punish the Muscovite intervenes Satan, through the actions of his surreal assistants, so far away from human things and nevertheless so rooted in them. The black magic scene at the theatre is nothing short of a sublime piece of literature, as it exposes so elegantly and with an incredible sense of humour people’s narrow-mindedness. But many such grand scenes are to be found in this book.

Satan isn’t evil, he represents the shadow, which is neither good nor bad, just the opposite side of light, and as such necessary. He observes with placid indifference the unravelling of universal chaos, and he looks with disdain at humans weaknesses. He punishes the petty masquerade people hide behind, almost as a divine messenger. But he doesn’t punish truth: the acknowledgement of one’s own nature which must necessarily be light and shadow at the same time.

Hence the esoteric outbursts, and the negative emotions, such as Margarita’s vengeance, and the blood, the nudity and the sensuality, all pass with frivolous lightheartedness in the novel, while the human events are either tragic or ridiculously pathetic; and there are many picturesque human characters and happenings in the novel.

In the end, only the Master and Margarita remain loyal to their nature. Theirs is a story of diabolic passion for the truth of their feelings and emotions.