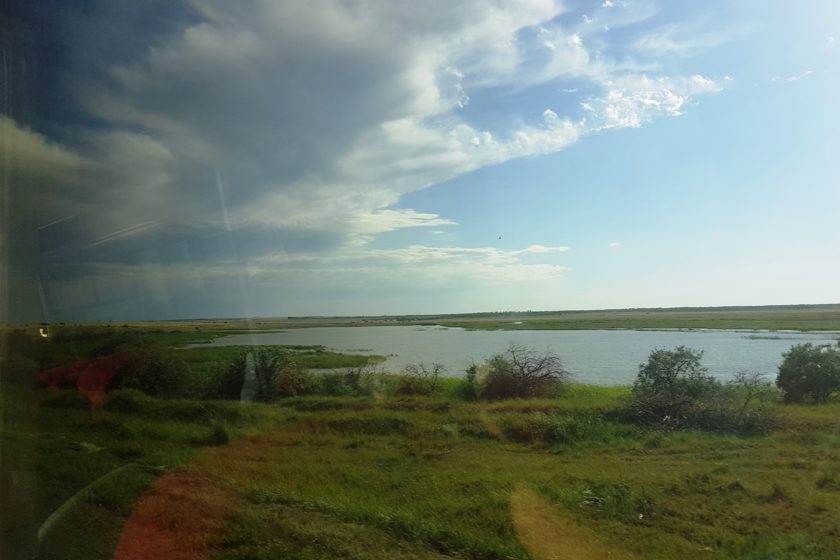 A long bus drive, a funny old lady providing food, and my eyes laid upon the immensely distant horizon of the Kazakh steppes: a border crossing and some thoughts.

On my way to Rome from Vladivostok via land, I made a decisive move towards the south in Russia, as I intend to go through the many Stans of Central Asia. So, from Barnaul, I took a bus to Semey, in Kazakhstan. It took a mere 10 hours including border controls to get to my destination. Easy peasy!

Of course, no one spoke a word of English on the bus. Despite so, some people took care of me, first and foremost this grumpy looking old lady sitting right in front of me who, without ever exchanging a word or looking behind, kept passing food: hop she was handing over an orange, re-hop she was handing over a potato bun. She was loaded with food, and not that grumpy I guess. Ah, the deception of appearances.

She would have not accepted no for an answer though, that much I understood immediately, and I abode to that primordial instinct that every Italian knows thanks to their grandmothers, which compels you to eat the food no matter what, or calamity will fall upon you.

So I go with a belly always full while I look at the landscape outside the window. Kazakhstan’s business card shows already a tremendous difference with Russia, and yet a strong connection with it.

The road is straight for hundreds of Km compared to the twists and turns I went through in the whole of Russia. It’s hot now, nothing has remained of the brisk air of the Russian Altai. Kazakhstan is flat, nothing obstructs my view and the feeling of vastness is exponential. From time to time there’s a tiny farm amidst the nothingness and some flocks of sheep grazing the green and yellow grass.

It will remain like this for over 1,000 Km, becoming more barren the more it goes south, until Almaty, where the high snowy mountains shared with the Kyrgyzstan rise in the background of the city.

Russian people welcome you with ill-concealed shyness, which turns into a somewhat serious and apprehensive look, sometimes even rejection, probably caused by the lack of English speaking skills, and therefore the awareness that they cannot communicate properly with you. In reality, they are incredibly friendly and kindhearted, and among themselves, as I witnessed many times on my long train rides, also very chatty.

The first impact with Kazakhs shows they are more openly curious and outspoken. They do say hello and smile at the same time :). They mostly look friendly. Even when there are language barriers they often go out of their way to help out.

The country is mostly Muslim and has a very diverse ethnic heritage. However, there’s a visibly big chunk (over 20%) of ethnic Russians and Russian is the first language spoken by all Kazakhs I met, even in the south. Despite the differences, in Kazakhstan the historical connection with Russia feels pretty strong. I am very curious to see how that’s going to be in the rest of the Stans.