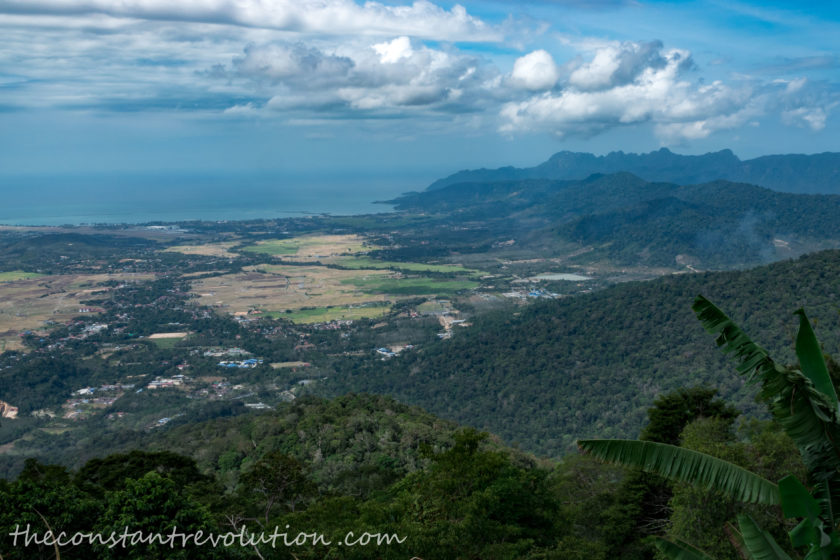 Incredible but true, Langkawi manages to have both the chill vibe of a hippy beach and the busy seaside life of a big touristic hub, not least because of its duty free prices.

It’s really hard to find a place where you can get anything you want at a relatively cheap price, full of tourists from all over the world but mostly from Northern Europe, with pretty much all kind of restaurants and food, and at the same time with a generally easy going attitude. That’s Langkawi island in Malaysia.

I spent only a few days on the island as it was my entry point via the sea from Thailand, and I must say it is not my type of destination. Far too many people and far too happy. Cenang beach, where I was hanging out, where everyone does, and should, hang out, is a kind of amusement park. Water ski jets, parasailing, banana boats, sunset and snorkelling trips, lots of beach front bars and restaurants with quality food, and parties until late at night. You name what you want, you get it.

It’s the kind of big, busy beach with lots of activities to take tourists money. Nothing wrong with that, and it can also be money well spent, as the whole island is duty-free. So alcohol and many other products are as cheap as they get in Asia.


At the same time, it doesn’t feel like such a busy and touristy environment. It feels more like an easy going, somehow hippy one. There’s a lot of live concerts, often some kind of reggae music, and people are generally relaxed. It’s that classic place where you plan to stay for a few days and you end up chilling for a week, or two!

Not my case, I was longing for some jungle treks and nature in Malaysia, but that’s exactly what happened to many backpackers I met.

THINGS TO DO IN LANGKAWI

Besides Cenang Beach (which I repeat, is the place to go, anywhere else would be boring as there are no nature resorts or eco-resorts of the kind you can go and be in peace), the island is relatively big, with well-developed infrastructures. It can be easily visited by renting a scooter, although there are also options for transport such as taxis, Grab app, or renting a car.

No, not that kind of high! The mountains top kind of high. Ok, mountains is a big word, let’s say hills. The island is basically a big hilly jungle, and there are many ways to reach the top of some of these hills to admire the view.

In the North-West part of Langkawi, a cable car takes hundreds of tourist every day up to snap few photos, and for a relatively low cost. I don’t know how much, I didn’t go.

Not far from the cable car, a short walk takes to the famous Seven Wells Waterfall, reachable with 10 minutes walk up some stairs, free entrance. The waterfall is nothing special, actually they are not even visible. But just before it, the river gathers water in seven small water ponds where it is possible to bathe and freshen up.

More interesting is the trail that starts from the waterfall and reaches the top of Gunung Mat Chinchang in about two hours (1 hour and a half to come back). Be careful though, as the trails seems easy for the first hour or so, and then becomes pretty steep, with a rope that goes along it all the way to the top for help. A pair of decent shoes is recommended.

Another way to go high is to drive yourself, notably to Gunung Raya in the centre of the Langkawi. The drive is fun if you are a motorbike rider, lots of curves, and the view is decent once you get there (featured image). There’s a kind of a facility with antennas and stuff up there which is off limits to tourists, or anyone else. For this reason, unfortunately, the view is not 360 degrees.

All these places are marked on Maps.me or easy to find on Google maps.

Another self-driving activity is to visit beaches around the island, the most famous ones are in the northern part. So starting North-East there’s Tanjung Rhu, said to be famous for its sunsets, but to tell the truth I haven’t been there. Then moving West you’ll find Black Sand Beach, where no one really swims though, people just go there to see it.

There’s a folklore story about a princess from an underwater kingdom falling in love with a prince from a land kingdom, and of course there is a war between the two kingdoms and that’s why the sand of the beach is black. Mmmm. Ok. Seems stolen from Disney’s Little Mermaid, or perhaps it’s the other way around.

Anyways, at the westernmost tip of the island there’s Skull Beach, which is a cosy white sand beach, probably the best on the island. I don’t know about the origins of the name. I didn’t see any skulls around.

And this is all for my Langkawi experience. There are more possible activities on the island, but nothing particularly worthy of being mentioned. It just depends on how long time you want to spend there and how bored you get doing beach life. To me, a few days were enough to get a taste of this island, and then I moved on.