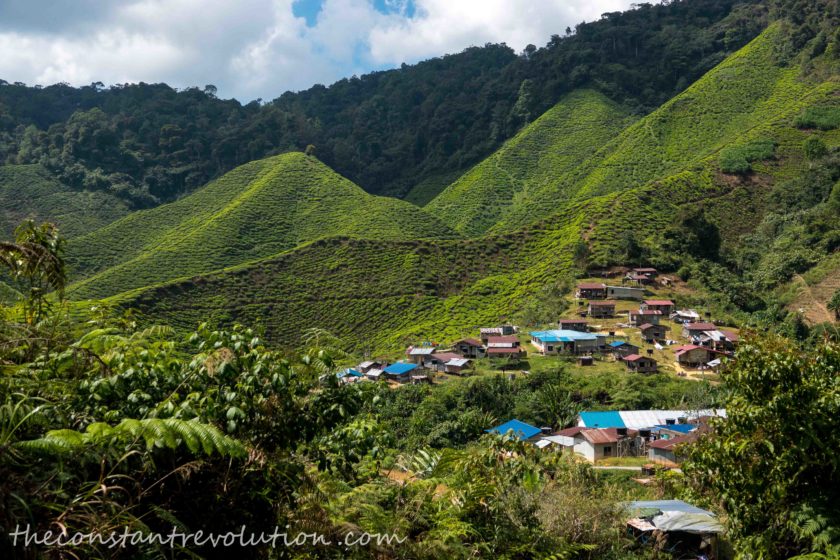 Well known for its photogenic tea plantations, strawberry fields and accessible jungle trails, Cameron Highlands is a nice spot for a short stopover whatever directions you are travelling to in Malaysia.

I’ll cut to the chase for a short and hopefully informative post: Cameron Highlands is a very touristic destination, with lots of people, backpackers, locals, families and what not visiting the many tea plantations and strawberry fields that are scattered around the area. If that’s your objective, you can find accommodation in different places along the valley, but you’ll also need your own means of transport to move around.


If you are a backpacker and/or you are looking for some action in terms of jungle treks, then the place to be is Tanah Rata. From here, several short treks up the surrounding mountains are possible, also without organised tours or guides. Some of these treks pass by tea plantations as well, with nice viewpoints, therefore eliminating the need to go look for this somewhere else.

Do not expect breathtaking views though, or to be rewarded with a solitary peek from above onto the valley once you completed one of these treks. You’ll probably have company, and the natural beauty of the place is something I would honestly define as cute. It does make for a nice stopover if you are travelling in any direction on mainland Malaysia, but that’s about it.

A word of advice: all of these trails are relatively short, like 3 to 5 hours max to complete, depending on your pace, but they shouldn’t be underestimated. At times they get pretty steep and slippery, and they not very well maintained. They often pass by thick jungle too. So, long pants and good shoes are recommended, while lots of water should be taken along. Better not to go alone either, as usual when trekking. On the other hand, the trails are pretty easy to follow.

Tanah Rata is not a particularly beautiful place. But it is has a friendly and easy going vibe. There are many accommodations for all types of budgets, and lots of good and cheap food around. As it is already about 1,400 m. high, the average temperature is fresher in the mornings and nights compared to the biggest cities or anywhere along the seaside.

Here are the possible treks and activities from and around Tanah Rata, the hostel where I was staying had a map with the indication of the sites and trails, which makes it easy. I assume most accommodations have similar maps. Otherwise, the trails are indicated correctly on Maps.me 😉

The most famous climb in the area is the Gunung Brinchang, probably because it is the highest peak at about 2,000 m. The starting point is not from Tanah Rata, but from Brinchang as the name suggests. This means you need to take into account getting there and coming back if you are going to trek it on your own.

Many people go there with guides, there’s a bunch of legends about the mountain being cursed. A local told me is like the Bermuda triangle of Malaysia. Mmmm… let’s say I am sceptical.

In any case, it is supposed to be the hardest climb in the area, although still short, about 3 hours. I haven’t done it, it was complicated for logistical reasons, so I can’t tell. I believe it is a little steeper than others, perhaps with some exposed passages, and that’s why some people decide to go with a guide. And because of the curse of course. So, up to you.

A super famous tour is the one that takes you to the so-called Mossy Forest, also close to Brinchang. I don’t do paid tours unless something I absolutely can’t miss and there is no other way, so again I don’t have direct experience of it. However, I talked with several people I met who said it’s a pretty nice and easy tour: basically a 15 min walk in the jungle to visit this section of the forest which is particularly rich of lichen, moss and musk.

The tour is usually paired with a visit to a tea plantation and some markets to buy strawberries. I understood that depending on the guide you might get interesting information during the tour, and in any case it is the only way to visit the Mossy Forest, which cannot be visited independently.

Any guesthouse or tour agency sells it for a price that ranges around 50 MYR (about 10 EUR).

More or less the same goes for sunrise tours. The best viewpoint is close to Brinchang and paid tours would take you there and back for a relatively low cost. Nothing stops you from finding some other nice spots for sunrise of course. 😉

There are many trails to reach the top of Gurung Berembun at 1840 m above sea level, some more frequented, some less, all starting and going back to Tanah Rata. There’s also the possibility to check out Robinson Waterfall and Parit Waterfall on one side and on the other of the mountain. They are nothing special really, but by going that way I inadvertently took the longest and less frequented path, number 8, to reach the top. I met only one other group of people.

Still, it takes no more than a couple of hours to trek to the top, after all the difference in altitude is only 400 m. But the path is a fun, steep one often going through the thick jungle. I also spotted some local langur monkeys among the trees. I have been told they keep their distance from people as they were once hunted down. As I was there on my own and tried to be as stealth as possible, they were moving about 30 metres above my head without much of a trouble. The thickness of the vegetation makes it difficult to get a good look at them though.

All in all the trek took me 4 hours, and it was a fun half a day. The view at the top is not much, as there isn’t a viewing platform free of vegetation.

Last but not least, Gunung Jasar is the lowest and easier of the treks mentioned here. From Tanah Rata it takes about one hour to go to the top of it. However, the view is not bad at all from there, especially on the back side, the one opposite the town.

Going down on the other side is more fun as the trail goes further below than the starting point in terms of altitude, and passes through very photogenic tea plantations. At the end of the path there’s a viewpoint with many tourists that reach it by car, and you’ll find yourself at about one hour walk, uphill, from Tanah Rata on the main tarmac road. Really not a nice walk to undertake. I was with a couple of friends for this trek, and we managed to hitchhike a passage back to town. Lucky us!

In total, again it took about 4 hours from beginning to end, and again it was a fun half a day out. Recommended especially if you haven’t seen other tea plantations.

TRANSPORT TO AND FROM TANAH RATA

Tanah Rata is very easy to reach by bus from whatever place you are coming from or you are going to in mainland Malaysia. Usually, it is a stopover for people travelling to or from Penang, Kuala Lumpur, or the Eastern and wilder jungles of Taman Negara National Park.