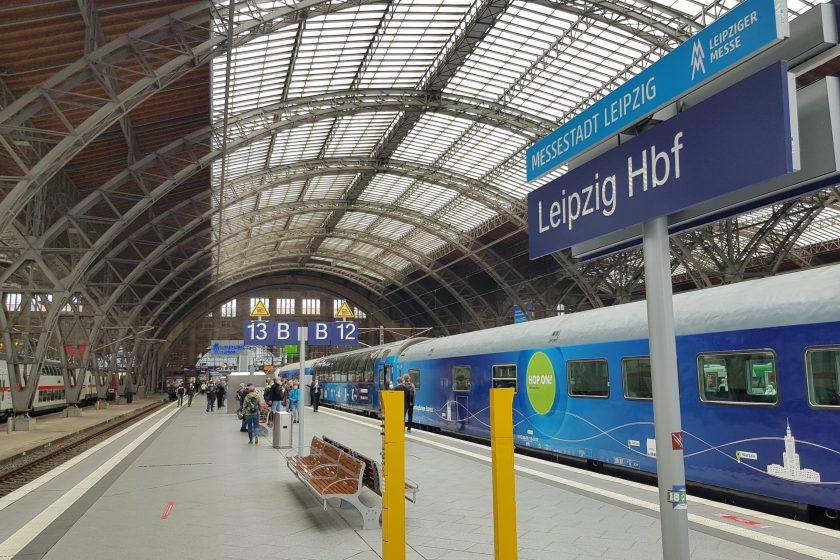 Where I miss the train,  I meet the Discover EU program co-founder, and the Connecting Europe Express gets to Berlin where it meets the 1957 Trans Europe Express, version 2.0.

We were wondering who would be the first. There have been bets on it, we named some names, pointed fingers, had a few laughs and jokes about it. Someone, we were sure, sooner or later had to do it. And on the dawn of day 28, in Frankfurt city, Germany, it finally happened: I missed the train. First and only passenger/team member so far.

I was still in the sweet world of dreams when Femke called me with the simplest of questions: are you on the train? Ehm… nope, I’m barely aware to be alive right now, where am I? Right, in a hotel room. My damn alarm didn’t go off.

I just jump out of the bed, luckily I pack light so in 2 minutes I am in the elevator, I throw the key card to the receptionist who catches it with agility, and I run to the station to buy a high-speed train ticket to Leipzig, hoping to surpass the Connecting Europe Express and hop on from there.

There’s one train 15 minutes later which will gain a half an hour advantage on arrival in Leipzig. Great. Ouf. Relax. Just a last little bit of suspense as the platform is changed last second and of course no English announcements in Frankfurt (why would there be any?). I almost missed this one too. Finally, I manage to board. From here on it’s a ball.

I get to enjoy a nice 3 hours train ride with no common language with anyone around me. Fantastic. I reply to some emails, do my social media posts, I even manage to pull out my e-book reader. I am reading “Kafka on the shore” by Haruki Murakami.

It feels like the perfect book for train travelling. Murakami’s writing style plunges me into an oniric world, made of delicate existential figures and unlikely events happening. From time to time I lift my eyes and stare at the green German countryside out of the train window. I feel at peace.

The peace lasts very little as I get to Leipzig station. Quite impressive by the way, one of the best we have seen so far and I think one of the biggest, not much in terms of capacity as in terms of floor dimension. There’s a lot of space between platforms. A famous coffee roaster chain is located in an enormous room that could host a gala dinner.

Shortly after I rejoin my Connecting Europe Express family. It was a fun detour, which once again teaches that we can always expect the unexpected, and the future cannot be foreseen, as I always point out to those who believe the contrary. No one bet against me, but it was I who missed the train first and let’s hope last. It also shows that there are good high-speed rail connections between Frankfurt and Leipzig, to my personal benefit in this case.

I discover quickly that there are a lot of people on the train in this segment, and things got somewhat hectic. It’s funny to think that, opposite to common beliefs and clichés, most of the chaos with logistics, passengers boarding, events organisation and even a train delay (20 min in Leipzig) have been happening in Switzerland and Germany. And here we were all thinking the South, the East or the Balkans might cause some of that. Instead, there everything went incredibly smoothly.

But even unexpected messy days are part of the journey, which has to go on. In the dining coach (The Office), I meet Martin. He tells me about the Discover EU Program, by which 18 years old EU residents can get a free interrail ticket to travel around Europe. 100,000 young EU citizens have benefited from this program, which is going to be re-launched next October.

Today, this is an official EU program, but it all started thanks to the free interrail initiative, a citizens initiative which Martin co-founded. So what’s the dream now? I ask. Well, why not making an interrail ticket available to all Erasmus students, or even to all EU citizens at the moment of their eighteenth birthday? It should just become a basic right for all in the EU, Martin says.

I couldn’t agree more. Interrail is the best way to discover Europe for the new generations, and to have an adventure. I wish I had this opportunity, and good information to go with it when I was that age. I hope this is going to happen soon.

In the meantime, we have arrived in Halle, one of the biggest freight terminals in Europe. Here we take a two hours break to see a demonstration of the Digital Automatic Coupling (DAC), an EU-funded project. This will make it possible to connect and disconnect, i.e. coupling and decoupling if we want to use the technical terminology, wagons automatically. Normally, this is a job that has to be done manually, and there are about half a million train wagons in the EU that need to continuously do this operation. This project would allow to save up to 70% of the time, with obvious benefits in terms of costs and efficiency.

From Halle to Berlin it’s just another two hours ride. I would like to challenge Kamil at chess again since it’s his last day on the Connecting Europe Express. I do deserve my revenge like Beatrix Kiddo in Kill Bill. However, time is short today, we all have some tasks to accomplish. Perhaps we’ll play online. But the time for goodbyes is not there yet. Tonight, in Berlin there’s a gala dinner. Time to go freshen up and make ourselves presentable.

A fun fact before closing this day. In Berlin, at the station we are showing the TEE 2.0, the Trans Europe Express. This is a restored train from 1957, the year of the Treaty of Rome, by all means the beginning of the Europan Union journey.  A train, and a gesture, carrying a lot of meaning. It will remain there for three weeks and then be used only for special services.

Tomorrow we are going north, towards Copenhagen, but we’ll have another overnight ride.