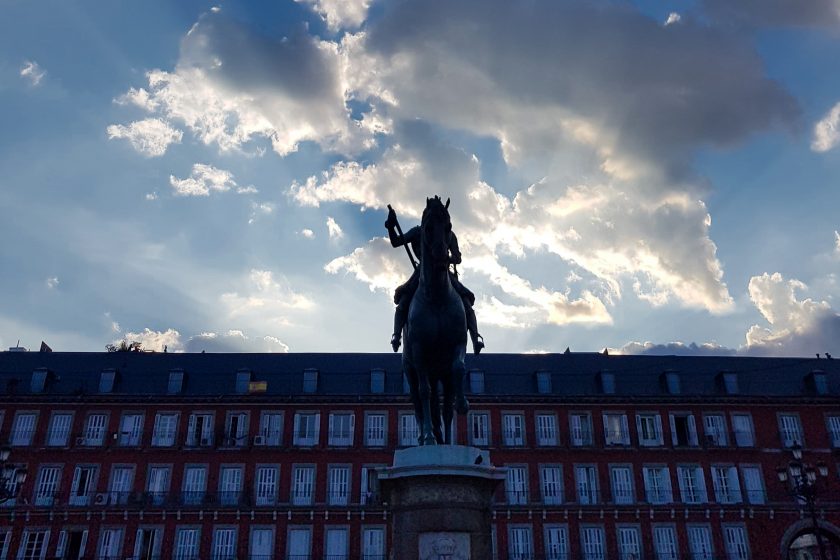 Where we crossed borders for the first time on the journey, we exchanged a lot of flags with pennants, and welcomed on the Connecting Europe Express a Spanish filming crew from Villalba to Madrid.

Covilhã is a sweet stopover with a couple of nice highlights. The first is a Fado concert we were gifted over dinner. It’s a kind of melancholic music, and I guess Fado musicians and singers have to feel it profoundly in order to perform it, they can’t just fake it, it wouldn’t work.

The second highlight, at least for me,  is Antonio, a very talkative taxi driver who managed – in a 5 minutes ride through the narrow steep streets of Covilhã – to tell me the story of his life, divorce included, in a language I don’t understand. It’s true that when people want to communicate they always find a way to do it.

Anyways, at the station there’s a flag exchange, actually one of the 120 city or regional pennants exchanges with the EU flag that will take place during this journey as a token of mutual friendship and cooperation. I am looking forward to seeing all of them gathered together, it’s going to be a proper European sight.

In Vilar Formoso we take a 30 minutes stop. The town is only 100 m from the Spanish border and in order to cross a locomotive change is needed. A smooth 20 minutes operation, but the question comes naturally. Why couldn’t we keep on rolling with the same locomotive towards Spain? It would be much easier for us, but especially for all the people that need to travel one way or the other.

So I talked with some of the experts on board and indeed cross border connections is one of the big challenges the EU rail system has to tackle, at least between some regions. There are infrastructure issues; there are issues with the capacity to manage traffic and lots of trains; but there are also political issues as the national and regional authorities often, albeit not always, tend to prioritize national projects.

It’s kind of interesting that this question came up in Vilar Formoso as the town was a free border crossing for Jews during World War II. Once in Portugal, they could hope to escape the atrocities of Nazism via the sea towards more welcoming lands. Just an interesting historical fact. But how about continuing this nice tradition of openness and freedom by making sure in the future the rail cross border in this segment will work without setbacks? 😉

In the meantime, the journey continues on the Connecting Europe Express. It’s fun to see that in each station we are warmly welcomed. Even where we are not stopping but just passing by people gathered to give a wave to the EU Year of Rail train.

The direction is Madrid. On our way, we cross half of Spain and go through some amazing views. I loved the whole area around Salamanca, with wide green and yellow fields, going as far as the eye can see and covered with old olive trees, and scattered cows and horses. Really beautiful!

Then suddenly we ride through some galleries, mountains get higher and higher up until Villalba, which is gifted with one of those great mountain view backdrops in the distance. Here suddenly we stop looking outside the window and we focus on the inside of the train as a Spanish film crew is boarding to shoot a short film about a student and a teacher who – guess what? – are meeting on a train after a long time. We look forward to watch it.

Tomorrow early rise and a long train ride straight to Bordeaux. But before that, a well deserved night walk around Madrid, and some properJamon and wine.