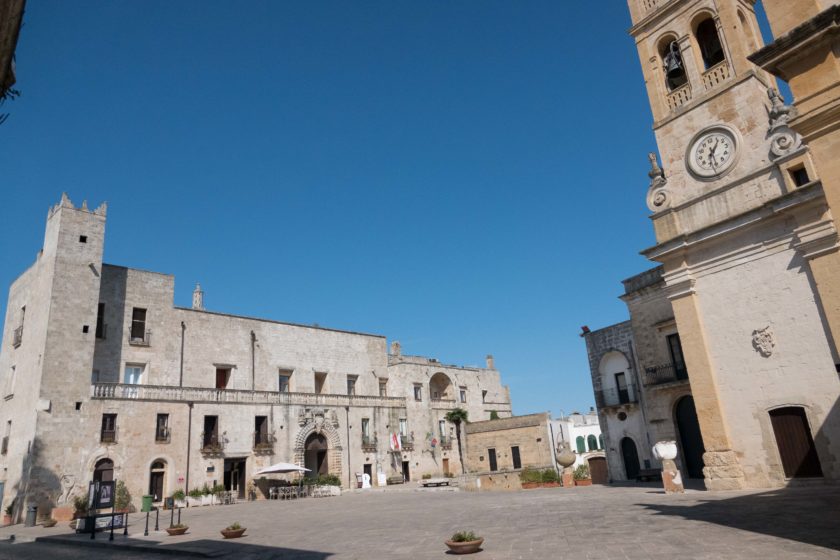 Apulia is the Italian territory giving shape to the famous heel of the boot, a realm of hundreds of picturesque towns (borghi) scattered around a beautiful olive trees populated countryside and fantastic coastline with turquoise, crystal-clear waters.

I have chosen Puglia (Apulia in English), the tip of the boot’s heel, for my come back to Italy after a year and a half of travelling, and I couldn’t have chosen better. From Greece, a ferry took me to Bari, the biggest city in this region and absolutely worth a visit.

The old town is lovely to walk around, with plenty of Baroque architecture, which is the main style to be seen in the whole region, but I am not gonna start mentioning all the names of churches, saints and squares or we’ll never see the end of it. The whole of Italy is like a history of art lesson, for the interested ones. Bari is a lively town, with an important port and some universities. So, there’s much going on and a couple of nights out are recommended.

Between Bari and Brindisi, there are already at least three places worth visiting. The first is Alberobello famous for its traditional huts with a conical roof, called Trulli. In this town, there’s a high concentration of them, but the countryside is filled with them, providing some interesting views.

Then there’s the white houses and narrow alleys of Locorotondo and Ostuni, both castled on a hill, so similar to what you can see on some Greek islands. I was really impressed.

Of course, and here I digress for a moment, each region has its specialities when it comes to food. Ah, Italian food, finally! For Puglia, I’ll just mention pasticciotti, orecchiette, focacce, panzerotti, capodicollo, primitivo. Figure it out.

Anyways, I really spent most of my time around Salento, the southernmost part of Puglia, using Lecce, the biggest town as my headquarter. But as lovely as Lecce is, the old town is quite spectacular, the real beauty of Salento is that the whole place is scattered with lovely borghi.

On the Adriatic Sea coast I’ll just mention Otranto, one of the most beautiful small ports I have seen, and the nearby amazing Baia dei Turchi (Turks Bay), for an autumn dive into beautiful waters, probably last of the season for me.

Further south, right at the tip of Puglia, there’s Santa Maria di Leuca, which impressed me for its beautiful enormous villas with sea view, and the rocky cliffs from where it is possible to enjoy sunsets. A little further north, inland, there’s Specchia, a very small, very empty when I was there, but very charming borgo (featured image).

Finally, following the coastline on the Ionic Sea, I just had the time to stop by Gallipoli, another lovely port, a bit bigger than the others I have seen, which in ancient Greek apparently means “beautiful town”, that says it all, I guess. Indeed, most of the port towns mentioned here have Greek or Roman origins, and went through quite a big chunk of history. Special places.

Yet, besides the town, I understood that, in high season, this part of Salento is where the party is on. Ah well, I’ll have to go back 😉