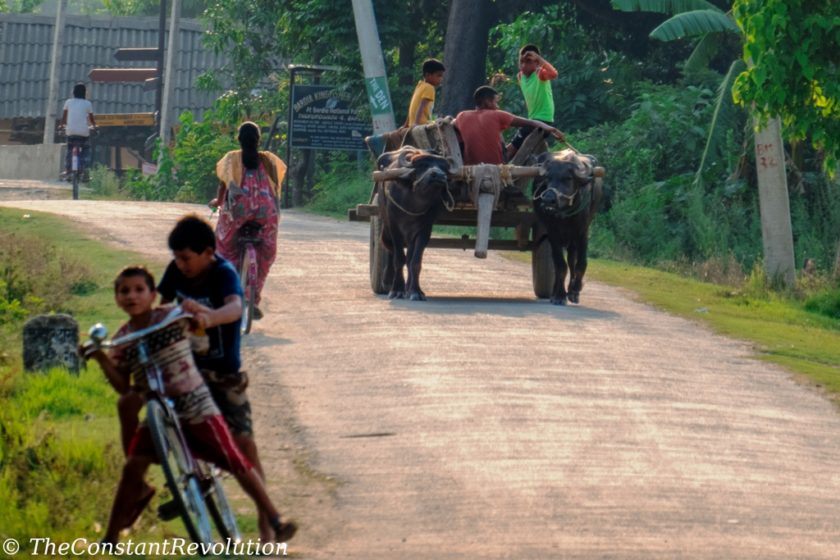 The people of Nepal’s Terai, Tharu, have still a quite intact rural life style, but how long will it take to the force of modernization to kick in and change this society forever?

When you stay for over a month in Nepal’s Terai, Thakurdwara, right outside Bardia National Park, you get many chances to experience authentic jungle adventures, but you also get to meet, talk, and observe Tharu people, the ethnic group of this region. Here are some information and thoughts about their way of life, and how it is changing, while in a separate article I’ll describe the curious role of Guruwa, or healers, sort of local doctors whose I have been a patient myself.

A QUICK WORD ON THARU ORIGINS

In Nepal, the Tharu are recognised as an official ethnic group. They have been called people of the jungle for centuries, but are traditionally farmers, practising the cultivation of rice, corn, and lentils. Yet, they are adept in the jungle, collecting fruit and medicinal herbs from the forest and fishing for fish and shrimp in the rivers. They also hunted wild animals such as deer and wild boars, though this practice has largely ceased due to the establishment of the national park and its protection. Their origin is kind of a question mark, wrapped around myths and oral traditions, but their long isolation allowed them to develop their own culture, way of life, and beliefs. 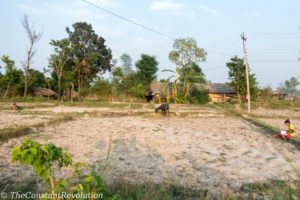 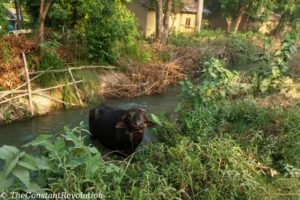 The Terai is the flat fertile land which spans across the base of the Himalayas and was once a continuous belt of forest. Though much of the forest across this range has been cut down, the forests of West of Nepal have largely remained intact and are sparsely populated with villages comprised of fields and mud houses.


All households have some land where they plant crops and keep animals such as pigs, chickens, goats, ducks and usually a dog or two. The dogs are not for eating, they are kept to warn of intruding wildlife onto their fields, such as elephants, deer or wild boars. In between the maze of irrigation canals and dirt roads, many colourfully dressed women, always wearing long paints, often carrying headdresses, steer buffaloes and goats with a long stick firmly grasped in their hands.

At times, you would cross them on the road while they carry some kind of baskets or heavy objects on top of their heads. They seldom refuse a smile and a Namaste to greet the bypasser, although of course that is in Nepali, not their first language. In Tharu, it would be Ramram. 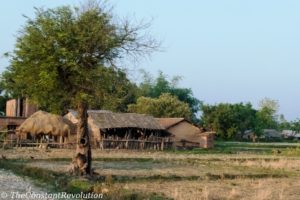 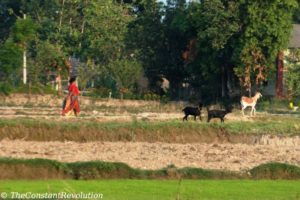 Women have a central and very active role in the Tharu society. They cook the food and take care of the house, they work in the fields and they take care of the animals, they go fishing although with a different technique than men, and even help in construction, as it’s part of their task is to plaster the walls with mud.

Men take care of the heavy work, like ploughing the fields helped by buffaloes and oxen, or moving heavy material and equipment. They are incredibly skilled in using the Faruwa for digging and tending to their fields. In the warm afternoons, when they are not working, they often gather around a cup of milk tea in a local tea shop. The man’s role is also more prominent in the political functioning of the village, and it is the man’s role to earn money for the family. 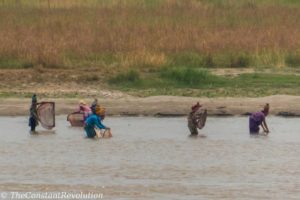 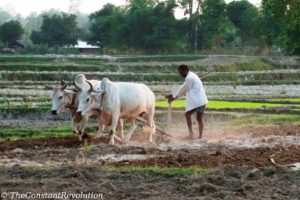 This division of labour is crucial for the functioning of a society that does everything without mechanization, only helped by buffaloes and oxen when it comes to agriculture and transportation. It’s quite impressive to see how much of this rural lifestyle has remained intact. They pass on knowledge orally to the next generation, and by what I could see, families are quite happy in their subsistence lifestyle. 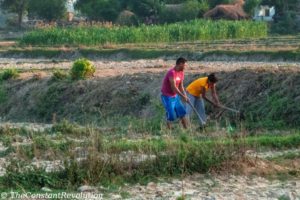 The beautiful, chestnut skinned Tharu girls can marry quite young, sometimes with arranged marriages, but that practice is not so prominent anymore, and love marriages are quite common. Often, a girl “runs away” from home and goes to her boyfriend’s family house when the relation is not in the open yet. She wants to get married, and if the marriage is accepted by the boy ‘s family, she will remain there.

The Tharu are Chaudhary caste, which is a farming caste, third down in a four laddered caste hierarchy. Historically, it was hard for any Nepali to marry out of their caste, but the laws are much more relaxed now, so inter-caste marriages do happen. However, in some families this culture is still strong. I heard dramatic stories of love affairs and suicide attempts because the families involved would not allow the marriage to happen.


Tharu have their jealousies, tensions, deceptions, and daily dramas when it comes to love, family and friends, just like in western societies. Despite what a rural lifestyle might look at the eyes of a foreigner like me, perhaps naively convinced that it’s an uneventful and conservative family oriented place, from a certain perspective people are people everywhere.

THE FORCE OF MODERNIZATION

That is a short, general description of how Tharu life has been until perhaps a couple of decades ago. But this is not the high plateaus of the Himalayas, where communications and trading routes might be difficult. The Terai is well connected with India and trade, infrastructure and tourism is developing fast, which is inevitably bringing changes to the people living in the Terai, like the Tharu. 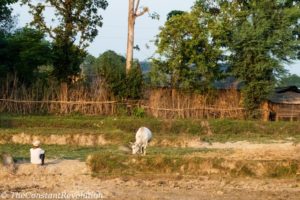 The force of modernization is indeed powerful. In the past few years, tractors and other machines for agriculture and heavy work have become much more common. As incomes slowly increase and people can afford to rent these machines to save them time, it is easy to see how this trend will continue. Mud houses are being slowly replaced by concrete, and slowly the mud and gravel roads are being upgraded to tarmac, although this hasn’t happened extensively yet.

Electricity wires are distributed mostly on concrete poles, but some are still propped up by old logs which are being replaced. I was able to help in this process and assisted a dozen people raising up an electricity pole by hand. That’s how it works if they want the electrical power to be distributed properly. The same goes for the internet, for which the service provider would give you a router, and a cable, then it’s up to you to connect it, somewhere, somehow. The traditional dances (Tharu love dancing), and festivals are still very much alive, so are some kind of spiritual practices, and beliefs. 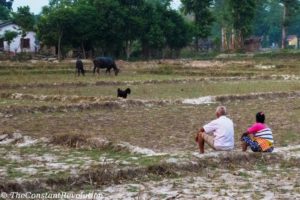 Yet, the exposure to modernity is there, and change is speeding up. Many Tharu have opted to open businesses for tourism for example. Even in the remote region of Bardia, in Thakurdwara, which has about 5000 inhabitants, there are some 25 resorts, and one or two “western” type of bars have started up. In order to run these places, people have to change mentality about the type of infrastructure and services they offer.

A cocktail would be unthinkable to traditional families, which normally drink roxy, a locally distilled spirit, or jar ko jhole, a type of rice wine. Some youngsters are wearing jeans, and American T-shirts and baseball caps, and in general pay attention to their look in a non-traditional way. TV and the Internet have such effects. Even though I have noticed most of the time kids follow Nepali music and programs, that is enough to modify the perception of reality and the lifestyle of a specific ethnic group. 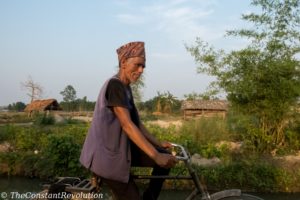 It might take time, but modernization inevitably brings about societal changes. It’s only beginning here, but I can clearly see the gap between the old and new generations. Only the young received, and are receiving, a different type of education, and speak some English for example, while the adults often speak only Nepali, or only Tharu. Education is great for many different reasons. However, with it, and with access to faraway worlds through the internet, the desires, expectations, hopes, and the whole outlook on how life should be lived, could very shortly be different in the Terai, as the new generations grow up.

I can’t help but wonder whether this is desirable or not, or to what extent. I have always been a progressive person, but not all progress leads to a better life, or a happier one. Some knowledge of these traditional societies could be lost forever, and that would be a shame.

The local culture, the know-how of Tharu is precious to the world. For centuries the Tharu have been the people of the forest. Now, they might just be on their way to become people of the world. Their traditions might become a mere spectacle for curious tourists, something to be artificially preserved from the movement towards standardization of society as a whole, just like the jungles and their inhabitants have to be protected from the actions of human beings.

Zoologist John Sparshatt has been living in the Terai, Thakurdwara for more than 10 years, where he has started his own business. Over this period of time, he learned Nepali language, and created working relationships and ties with many Tharu people. His knowledge of the region has been precious in drafting this article.