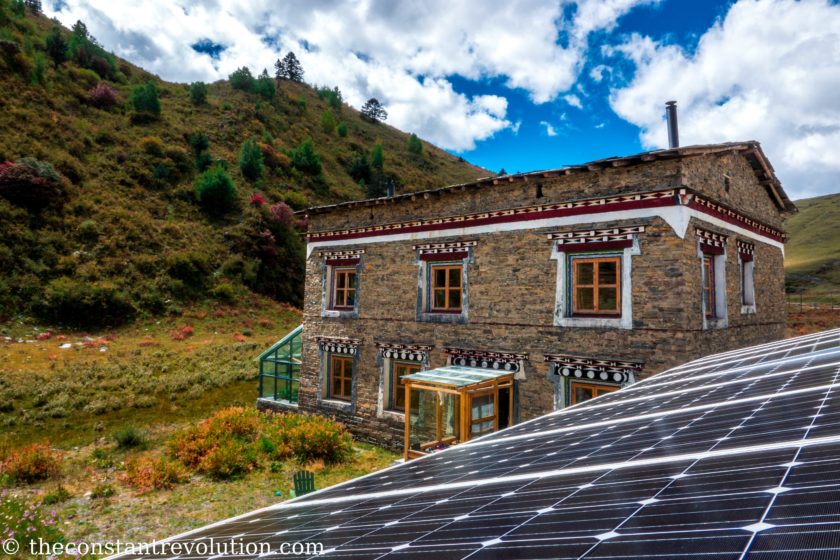 A cosy travellers’ hideout at 3900 m above sea level, in the Garzê Tibetan Autonomous Prefecture of western Sichuan, China, which works completely off the grid with clean energies? Yes, it’s possible, and it’s providing an example to follow to the locals. I have visited it and had the chance to talk with Angela, the founder and manager of Khampa Nomad’s Eco Lodge. Here’s her story.

Tagong, also known as Lhagang in the Tibetan language, is a small town situated on a high plateau in Western Sichuan, not far from Tibet. The whole area can be considered like Tibet with no need for permits to be visited when it comes to the vastness of its landscapes, its fantastic colours, its elevation and the Buddhist and nomadic culture. It is really a beautiful place!

It is also a spiritual place, with many Gompas, Buddhist monasteries with thousands of monks and nuns that live in the area, along with a small population that still carries on Nomadic traditions. All this is well known, at least to those who have discovered the area, as it isn’t exactly a crossroad. You need to want, and plan, to go there. And you should!

Another well known fact to some visitors, and certainly to all the inhabitants of the area (so many taxi drivers explicitly ask tourists whether they want to go to Angela’s place), is the existence of Khampa Nomad’s Eco Lodge, a welcoming, cosy and homelike hideout for all travellers, just 15 minutes by car from Tagong.

The lodge was founded and it is still managed by US-born Angela Lankford, who has been living in China since 2001. It lies on an isolated valley, tucked in between two high plateaus, with a splendid view on snow-capped mount Yala (5820 m.), the highest peak in the whole area.

Angela made sure to create a great atmosphere for her clients, with homemade food and a nice, warm space to share stories and experiences with other travellers.

The Lodge is perfectly located to organise some outdoor activities like trekking, horse riding and home-stays with the nomads living in the vast and charming lands around it. Or, alternatively, just to take it easy for a couple of days and enjoy the calmness, and what is probably the only existing sauna in hundreds of Km.

Most importantly, the Lodge works completely off the grid when it comes to its energy needs. This is not an easy task to accomplish in such an isolated area and at such elevations. But it is possible. If Angela managed to build a viable business with such low impact on the environment up there, everyone can do it anywhere.

I went to stay for a few nights at the lodge and asked how she did it.

“I’m fascinated by the nomadic way of life, and my husband is a nomad. Nowadays, nomads don’t have to live as they do, they still exist only because they want to, because they love their ways. So, I’ve decided this is what I wanted to do, to live here and make people have a taste of that nomadic life, through various home-stays type of tours, often paired with outdoor activities. This isn’t just a business for me, it also helps nomadic communities in the area getting some extra income.”

Angela and her husband started to build the Eco Lodge in 2014. She explained to me that she comes from a very ecological oriented family, back in Colorado, therefore doing things in an environmentally friendly way just came natural to her. Being power independent also made a lot of sense in Tagong, as there are often power cuts.

“At one point I just decided to stay off the grid. In the beginning the neighbours were asking me why, they were convinced it wouldn’t work. Now, when there are power cuts they come here to charge their phones”

The lodge has a mixed system of 24 solar panels, 2 small wind turbines, and a water turbine to provide electricity for all needs, divided in two different set of wiring and charging 16 pretty big batteries. In total the system has a potential of about 1 MWh, or 1000 watts produced each hour. Then, it goes without saying, it depends on how much sun shines and how much wind blows. Water flow is normally the more reliable in terms of output.

Luckily, at 4000 m. elevation and in a narrow valley wind is abundant, while the area is blessed with almost 10 months of sun per year and dry weather.

“It’s also important to learn how to use the power when it’s there” said Angela “how to use it consciously and flexibly during the day, to spare the costs of the batteries as well, which is definitely the most expensive when it comes to this type of systems. We have become experts in managing our power for cooking, cleaning, washing and all the needs of the Lodge and our clients.”

The whole set up cost between $10,000 and $15,000 for the machinery, the batteries, the converter, the installation and all. A relatively safe sum to invest to be power independent in the medium to long-term. There are several beautiful rooms in the Lodge, and a separated house with a dorm for low budget travellers. Power is normally enough to cover all lighting and have hot water.

The Lodge has also a couple of greenhouses which are adjacent. They have a double function. That of growing own veggies and herbs, and that of isolating the walls of the lodge from the cold. More, there is a system of pipes in the main building that moves the warm air of the greenhouse to several rooms, therefore providing natural heating. Pretty smart!

So, here goes the sceptic’s question: is the power output always enough?

Well, no. Most of the time it is, but not always. There are dark days, and snowy days (like the ones I was there, and still most of the time power was fine), and days with no wind. In those days the electricity output can be much smaller, and sometimes some adaptation is required.

“Most of my clients don’t mind” said Angela “They find it entertaining when the power is low and in order bathe they have to use the wooden heated sauna instead of the shower. Sometimes they’re unaware that we work off the grid, and when I explain it to them they find it very interesting.”

Indeed, during a very snowy morning, it was fun helping to ground some coffee beans by hand instead than with the electric machine. It took almost the same time and the coffee was great.

Furthermore, the Lodge is relatively young, and Angela is working all the time on improving the power output, thinking now about adding a second water turbine from the river nearby which would run 24 hours a day. Surely, with a little further effort, she will manage to get rid of the rare power shortages currently experienced in the Lodge.

The gas for the kitchen is propane, there is no alternative for cooking at the moment. As for the sauna, Angela did her research to build it and use it in the most sustainable way possible. She built it with Sichuan Cedar, a non-endangered species of trees in the area, and uses already dead wood to power it up.

“This isn’t easy to find or to gather” she said “sometimes we need to go on proper expeditions, but I also manage to make some deals with the monks in the area, who give me wood in exchange for help in fixing their solar panels”

Of course, because after the neighbours saw how well the Eco-Lodge works, they started to want to install their own power systems, especially the most isolated ones, far from the grid, the monasteries, sometimes some schools. Solar panels, it seems, are the most requested.

“It took a long time to build up the necessary know-how about how all of these systems work, where to get them, how to install them etc. For the laymen I mean, people with no technical knowledge like me, who need to be able to operate the system on their own. Now after so many years I am able to provide advise and help out others who want to have their own power source.”

A great illustration of how communities work together, and on the importance of setting the example.