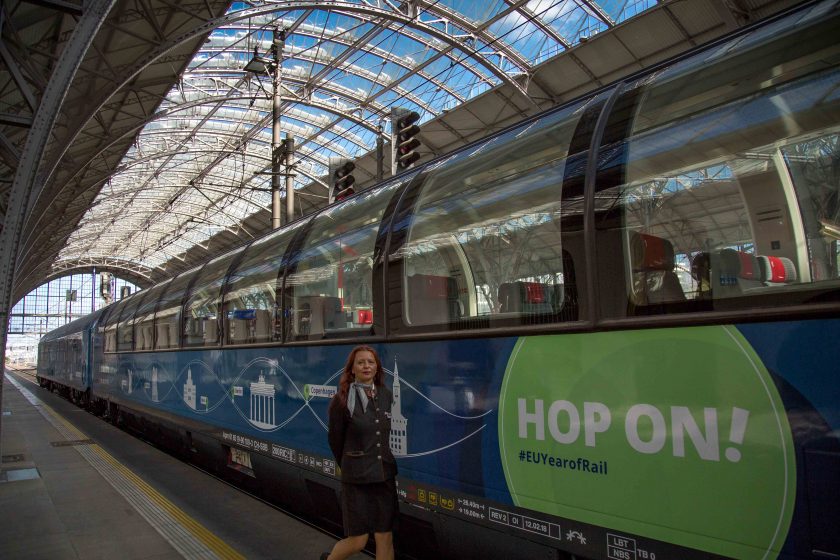 Where we enjoy our dinner on the Connecting Europe Express, I tell you about high-speed rail in Czech Republic, and I declare my love for Prague.

On the way to Brno last night we enjoyed ourselves (always between an email and the other of course). Just like during our first passage through the country, the Austrian crew treated us very well. Great service, good food, and also some wine. After dinner, I opened one of the bottles I got in Slovenia to share and try with some colleagues.

It’s always great to discover something new, no matter if a city, a language, or a bottle of wine from a producer I never tried before. Europe is such a diverse continent, probably with thousands of microclimates, which makes thousands of different grapes, and a winemaking tradition thousands of years old.

Discovering Europe can also take the path of wine, and discovering wine can be an amazing way to travel. Most wineries are located in stunning corners of a country.

We arrived in Brno quite late, and after the short exchange of pennants and reception at the station, we all go straight to the hotel for good night sleep. In the morning, there’s just enough time to go for a quick walk around the city centre, very nice by the way.

Among other things, I managed to see a girl on a balcony, a samurai on a rooftop, and a caveman in the middle of a fountain.  Then back to the station for a 3h ride towards Prague.

We are on the historic rail line on the TEN-T Orient-East Med Corridor, connecting Brno and Prague. A meeting to discuss the strategic planning for high-speed rail in the Czech Republic takes place in the conference room of the Connecting Europe Express. Many people present, among which Mr Grosch, the Coordinator of the above-mentioned corridor, the deputy Minister for Transport of the Czech Republic, and representatives of the European Commission and other institutions.

We are cruising at a pleasant speed of about 120 Km/h. But this is far from being high speed, which reaches 300 Km/h or more. The new line under discussion will be built completely from scratch, it won’t be an upgrade of the existing one we are riding on. It will make it possible to travel between the two cities in only 1h.

I am not part of the meeting of course, but I am told the Czech authorities believe the new segment of the corridor will be operative by 2028.

In Prague there’s another reception, and some of my colleagues stay to talk politics and go visit some works in the station. This is where I nonchalantly detach from the group, not before taking a few shots at the beautiful Hlavnì station hosting the Connecting Europe Express.

Prague is just too beautiful of a city to spend more time around the train, and it is Saturday after all. So, I head straight to the hotel, start typing, take half an hour to do some fitness, and off I go.

I have been visiting this capital many times and I am always stunned, intrigued, carried away by its mystical vibe. It isn’t only the architecture or the usual tourist spots. Although, believe me, there are many tourists, especially today it seems. I can hear speaking at least a dozen languages just in five minutes of walking around.

But Prague is also one of the most mysterious, magical, esoteric cities in the world. From the student’s legend in the Faust house to the recently (2002) discovered Speculum Alchemiae, and again the legend of the Golem in the Jewish ghetto. This city has been hosting some of the most important historical figures of obsessed alchemists, and lots of stories can be found at the dedicated museum.

Then there’s Charles Bridge, crossing the Vltava river,  with all those statues that seem to come to life at dusk or just before a misty sunrise, the magical hours. And how about the famous  Astronomical Clock, bound with intrigue and superstition. It is told the city keeps the clock in tiptop shape and fully functioning because rumor has it, if something befalls the clock, something will befall the city and its inhabitants.

You see? And this is nothing. There is no city embedded in mystery as Prague, not even Paris and Turin, the two other alchemic cities in Europe. Ah well, there is no time here to write down all the stories, but if you ever go to visit Prague go and read some of them beforehand. Then check out the places mentioned in the stories yourself. It will be much more fun.

As for me, it is time to go for a walk. It is almost sunset here, I don’t wanna miss it. Plus, Prague is where I had the best spare ribs of my life, and Czech beer is just a gift to travellers, for quality and price. Just try not to drink too much of it, or you’ll end up in one of the 1980s music clubs dancing like John Travolta in Saturday Night Fever. This is also Prague.

Tomorrow we’ll head towards another special city, Munich. And I very much hope the October fest will be up and running 🙂