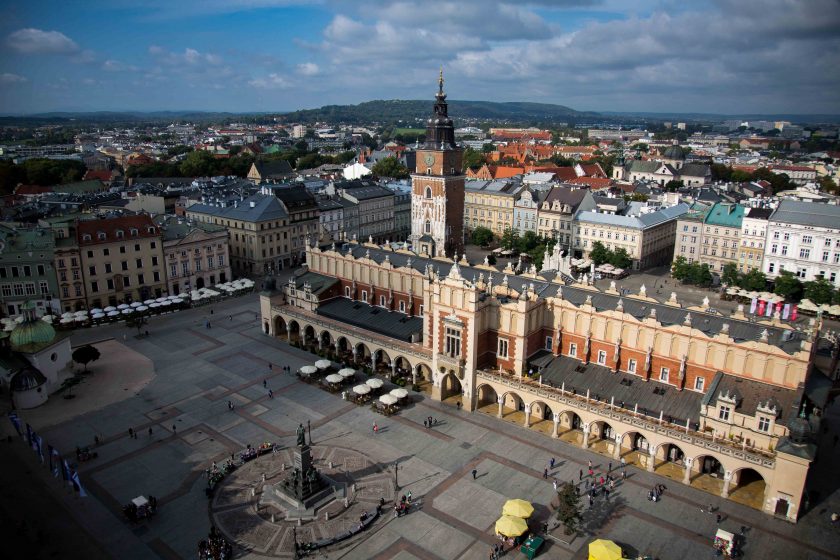 Where I discover a lot of interesting things about Krakow and Ostrava, including about rail, 30 minutes of weird stuff happens, and we prepare to spend the second night in a row on the Connecting Europe Express.

The second overnight trip went pretty well. We all manage to take our old bones to the sleeping cabins quite early, and despite a wobbly train, I manage to sleep quite soundly for 6 or 7 hours. Yay!!

We don’t have much time, but a short walking distance from Glowny Station stands the beautiful Market Place square. We climb to the top of Saint Mary’s Church tower bell, from where the view of the city is magnificent. Every hour takes place a kind of ritual, a heritage of old times when there were fortified gates to guard, and a signal was needed to open and close them.

So, right in front of our eyes, a guy in uniform plays a tune with the trumpet in the four directions of the gates, opening each time a different window with a splendid view over the city. This happens every hour, 24 hours a day, and two people take shifts. Sometimes, we are told, they abseil down the tower for training purposes. I’d love to do that!

Krakow was on the very first list of sites declared World Heritage by UNESCO. There’s also the Wawel Royal Castle worth visiting, but I get to see it only in a miniature in scale, and on Google images. Next time perhaps. A final curiosity, Krakow is one of the three cities in the world to host a Leonardo Da Vinci painting: the Lady with an Ermin, safely kept at the Czartoryski Museum.

Time is up. We have to head back to the station. But surprises aren’t over. People from the railway operator PKP take us for a site visit to an EU funded project that will create an important rail-flyover segment to connect Glowny Station with the Vistula river, adding 4 stops in between. A new bridge is also under construction.

The particularity of this project is that it dismantled a previously existing covered rail track, which was kind of dividing the city into two parts as a wall, to build instead the rail-flyover. For the first time people from buildings on the two opposite sides of the rail are seeing each other.

Furthermore, there will be a total of four rail tracks at the end of the works, increasing the capacity for both passenger and cargo traffic, which was an issue on this node especially for intercity communication. Nice project, which should become operative in the next two years or less (I can’t remember now, hehe)

Now we are leaving. The next few hours on the train pass by like a lightning bolt. I had no time to write a couple of lines and we have crossed the border to enter the Czech Republic and arrived in Ostrava. I don’t know what happened. Those hours are all black, perhaps I slept. Who knows…

Anyways, I discover that the most successful rail segment of the Czech Republic passes here. Apparently, it is faster to go to Prague by train than by car in this part of the country. No surprise, as Ostrava developed mostly thanks to railways, which were always the preferred means of transport for coal and steel. It is the heavily industrialised region of the country. Lots of cargo and passenger trains slide in front of us in the half an hour following our arrival.

Here is where things start to go a little towards the weird side. To begin with, for the first time in 22 days, no one is there to say hi. Alright, we might have gotten a little spoiled in the past weeks with dances, drinks, food, authorities and cameras. But not even a shy wave of the hand? Nope, nothing.

Ostrava’s authorities decided the Connecting Europe Express doesn’t exist, and neither do we. So, we suddenly have to come to terms with the fact that we are not superstars. I guess we’ll have to do without the pennant. That’s life.

But the citizens at the station surely noticed us, and they couldn’t keep their hands in their pockets for a second managing to open all the doors of a train that was supposed to be locked. Do “Ostravians” have some kind of hidden technique to open train doors? It will remain a mystery.

In the meantime, we realize that someone has come to say hi, it’s Marcel (I am pretty sure the spelling is wrong), a nice man working part-time for Europe Direct here in Ostrava, who has come to pick us up with a 7 seat car to show us around. Cool, we are super excited already that someone recognized our existence. Our own thoughts started to fall short on the mission. The problem is that we are in eight.

Mmmm… after serious reflection, while we try to keep all the train doors Ostravian-openers away from the Connecting Europe Express, we decide to try and fit in the car in eight.

However, when we get there we discover that one of the seats is leaning forward and got stuck. Now it has become a 6 seat car. Fitting eight people is becoming a bit more complex. It’s the impasse. Marcel doesn’t panic, and he tells us that he is a history teacher, not a car repairer. Not useful, but very strong point, with the added value to reveal what Marcel does in the second half of his time.

At the end of these 30 minutes of weird things happening, we call a taxi and split into two groups, giving each other rendez-vous at the bolt tower. This is an over 150 years old industrial complex now partially transformed into a kind of hipster place, with the unmissable café high above the rusty ruins.

Actually, a very cool place. There are a lot of photos and explanatory panels of its history too. I spend some time trying to take good shots of it, despite the cloudy sky. Imagine all that rust lit up by the sunset colours…

The whole neighbourhood where this complex is situated is surrounded by old factories. Some still work. In its centre there is a little church and all around the houses the workers and the miners used to occupy. The historic centre of Ostrava is pretty but small compared to the rest of the industrial landscape the city offers.

In the distance I can also see the Communist Era buildings. We were there with the car no less than an hour ago. Poruba is a large district noted for its distinctive 1950s Socialist realist architecture. These buildings are grandiose in style, inspired by Soviet cities, but also by ancient, Renaissance and Classicist models. They are quite different from those built in the 1960s and 70s.

Marcel tells us that once Khrushchev went to visit the city and when he saw those buildings he didn’t like them. They weren’t houses where workers should live, he allegedly said. So good to have a historian with this kind of gems up his sleeves as a guide.

We go for dinner, I have the first goulash (with wild pig) of the train season, and around 10 PM we are off again. Second night in a row on the Connecting Europe Express, a lot of stops, and early arrival for a big day in Ljubljana.