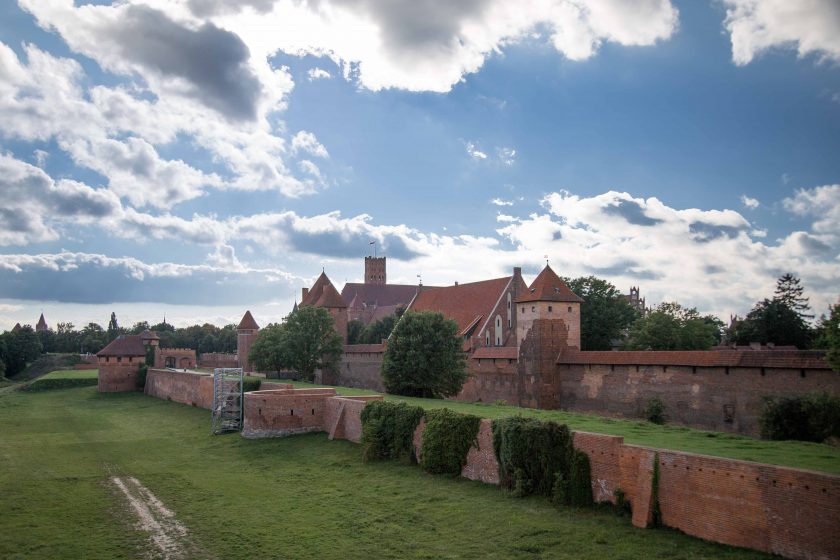 Where I talk about the pleasure of sleeping on the Connecting Europe Express and the importance of historic memory.

Alright, the first overnight stretch of the journey has gone much better than expected, at least for me. I’ll go as far as to say that I slept like a baby, if not like a baby at least like an adult with much need of sleep. But seriously, it’s kind of easier than checking in a hotel every day. We just had to say good night, and move from the dining coach (The Office) to the sleeping coach. Big gain on time.

Have you ever noticed how hotel rooms have never the right temperature or conditions? Too cold, too hot, too noisy, the bloody air conditioning fan won’t stop bothering you, there’s too much light filtering through the window, the neighbours are partying in many different ways, the elevator makes that ding sound which is weird enough to wake you up. it’s exhausting. I have tried many hotels, also good ones in this journey alone.

Nothing like a good train with a proper bunk bed: clean, not too soft nor too hard, really comfortable. By now the train motion is basically part of my very breathing, so no problems at all. A couple of classic tu-tum tu-tum, no internet connection to distract my eyes on the screen of the phone, and I am in the world of dreams.

Well, this is my account of the experience. Now, some other guests and colleagues on the Connecting Europe Express might disagree. Not that I asked, but their expressions in the morning were eloquent. I guess sleeping on a train is one of those things that you either feel very well or very bad about.

At 8h AM we arrive in Warsaw. Here’s another thing about night train travelling. You cover a long distance without realizing it. You just sleep and in the morning you are somewhere far, somewhere different, just like when you travel by plane. You don’t see it happen. It’s cold in Warsaw, we have to pull out our coats. The sky is threatening rain.

A small delegation welcomes us. The press conference will take place at 12h30, but the train in the meantime needs to go for its regular maintenance to the workshop. A couple of little electrical problems with one of the coaches, nothing that wasn’t swiftly repaired.

In the meantime we are taken to the Museum of Independence, which hosts a series of collections and expositions. I won’t mention them all, but a couple of curiosities.

The first is that during the implementation of several infrastructure projects in Warsaw, which were co-funded by the EU, many archaeological and paleontological discoveries were made. We are talking about the excavation works for roads and subway lines, for example. As often happens, old human settlements hide layers upon layers of objects which are all pieces of information about the distant past.

So, if we go 3 metres below the surface we find the pre-war line of buildings and streets. Warsaw was almost completely destroyed during the war. If we go deeper, below the sewage system, we find a 100-years old well, and many clay and glass objects which probably fell into it when it was still used.

But it goes well beyond that as 132,000 years old bones fragments of a straight-tusked elephant were found during the construction of the underground station in Warsaw’s Wola district. These mammals were twice as large as their modern cousins, reaching 4.5 metres high and weighing up to 7 tons. They went extinct about 115,000 years ago.

Amazing, isn’t it? To think of what once was walking on the same spot where today we take the subway. By comparison, the first human settlements date back to about 10,000 years ago.

The Museum offers also some expositions of more recent, well known, and exclusively human events. Two of the rooms are dedicated to the history of deportations before and during the Second World War.

We all know the sad stories of Nazi concentration camps. The most ingloriously infamous is perhaps Auschwitz, which was set up in Poland, not far from Slovakia. Perhaps we passed close to it during our overnight stretch. But there were also the deportations to Siberia, in Russia. These were mostly intellectuals, or highly educated people, as Soviet Russia wanted to cut down the intelligentsia of the country.

Over one million Polish were deported, many died, many had to go through some unspeakably cruel life conditions, and tortures. The Museum of Independence features a room with reproductions of paintings from three female artists that were deported. Some of them could paint what they witnessed only after a long time from the happening. The styles are different, but there transpires a feeling of oppression that I have felt only when visiting places where human cruelty took place.

The past is important to remember, in order to build the future, a different future. One of the paintings caught my attention because behind the line of suffering people, there stood a train. Trains were extremely efficient means of transport to carry out deportations. It didn’t matter how long it would take and people had to squeeze together in wagons, it was cheap and easy.

It is relieving to know that today I can travel throughout Europe by train just to visit, see, learn, taste, meet, have fun, and that everywhere I go I am welcomed.

Isn’t our journey on the Connecting Europe Express the perfect representation of unity, peace and openness? It’s been only about 75 years.

The time for the press conference at the station approaches. We all go back there. Many people and media as usual. We see the train arriving on platform 2. Two State Secretaries from the Ministry of EU funds and from the Ministry of Infrastructures are present, and the representatives of the European Commission and the TEN-T corridors.

Here we don’t discuss the past, but the future. More specifically the future of rail transport, which is linked with the future of the continent, to the way the over 500 million citizens in the EU will live and move within and without their countries. New generations, it is said, need to be convinced to use more and more trains for their mobility, and in order to do that, train services need to be efficient and fast. That needs investments, planning, good engineers, goodwill…

There is still a lot of work to do, but the future is interconnected, and the railway system is the backbone of that future.