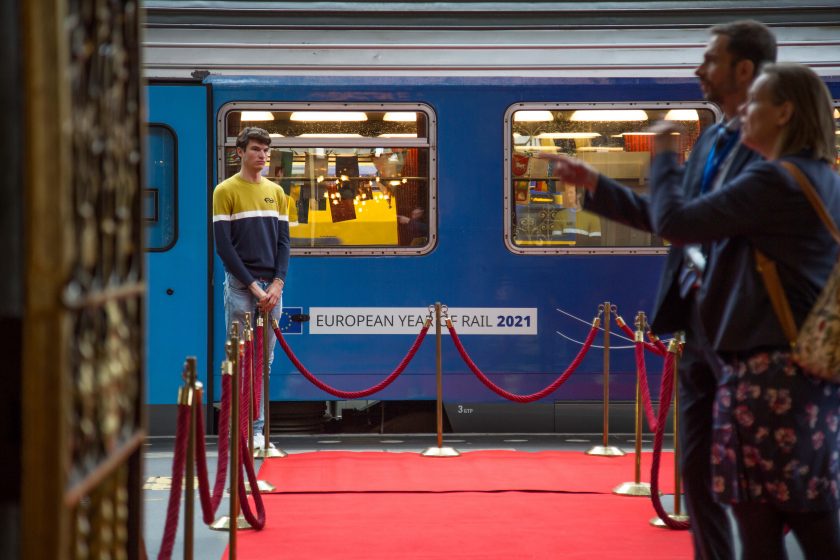 Where I describe the crew five minutes of weirdness regularly happening on the Connecting Europe Express, and we get a red carpet welcome in Amsterdam.

As expected, the Karaoke night on the Connecting Europe Express was lots of fun. We sang to our heart’s content, discovered a new talent in Jon, and lived through some emotional moments when the 20 or so people in the conference coach sang all together We Are the Champions and Bell Ciao. If I am not mistaken there were 12 nationalities around our small table. Nice, huh?

These are moments you remember. However, also as expected, after a vibrant nightlife on the train comes a less vibrant morning life on the train. Everyone’s face when popping out their sleeping cabins like chicks who just hatched, and then crawling towards whatever direction smells like coffee is just too much fun to watch. Understandable, it is Sunday after all and we are all up at 7 AM.

I mean, I saw friendships and relations going down a very unpleasant path for much less vicinity than this. Now I don’t wanna talk too early and break the charm here, but on this train people have been in a good spirit, smiling, working hard and almost not complaining for the whole time. Exception made for the internet connection, but hey, you can’t have it all. Give people internet and they’ll be happy.

At most, we have witnessed some of those five minutes of weirdness. You know? Those moments of irrational, surreal behaviour fatigue brings along. Never had it? For example when someone shows up in the dining coach (The Office) with the luggage ready at 8 o’clock in the morning as if we were about to arrive somewhere. Sure, in 12 hours time perhaps.

Or when someone starts doing something weird all of a sudden: singing, hopping, some kind of creative dancing, doing push-ups or downfacing dog moves in the corridors, stretching like a chimpanzee waking up on a jungle tree with a bouquet of bananas, staring at the ceiling for no reasons like cats.

Not to mention the conversations that go sideways: “markdown these names please: Appo Sullang, Tinlong Sebo, Purna Atama. Who are they? What? Are they on the list of passengers? Who? The names? What names? The names you just gave me? What about it? Well, who are they? They’re restaurants. Oh, right… “

I have seen people taking naps in places you humans can’t even imagine (cit.). You know? Those five minutes. Nothing to be worried about, it is normally very short, and I have high hopes we’ll all get to Paris in good mental health, and still be good friends. Now I’ve said it, I am expecting all kinds of things to happen in the next four days, ahah. Jokes aside, this is a fun crew.

While I use the little mental power I have left in me to mull over these concepts, we have arrived in Hamburg, for the second time. From here we continue to Bremen, where a group of teenagers comes on board to spend some time with one of the Commission Directors and someone from DB, the German rail operator.

It’s the third time the new generations make us feel their presence on the train. There was a citizens dialogue in Hendaye and then another class hopping on in Croatia. They always come with plenty of questions and it is kind of refreshing to see young students being curious about the subject.

In Bad Bentheim, unexpectedly, and despite the rainy day, there’s a lot of people waiting for us and lots of trainspotters. We must not forget to check on the hashtags, especially on Twitter and Instagram, as in the past couple of weeks trainspotters have multiplied.

Speaking of social media, we have welcomed in Copenhagen Magda, the last content creator and Instagrammer the #ConnectingEurope Express is hosting. Although Madeline is coming back for the last three days of the journey. You can follow the link to check out their amazing content.

The plan today is to get to Amsterdam soon, around 1 PM, which I am really glad about, if only it wasn’t raining. From the Netherlands, it is vital to develop cross border connections to the East. There is a high-speed line to Brussels, but none towards Hamburg, thus Stockholm, or towards Berlin and Frankfurt, which are the gateway to many other capitals like Vienna and Milan and from there even farther. We always have to think in terms of Europe-wide networks and connections.

Another important issue for countries with a dense railway network such as the Netherlands is capacity. In some places, there are trains every 10 minutes and demand is increasing, including for cross border connections. It goes without saying that with such a tight schedule any small inefficiency causes congestion and delays.

One way to avoid that is to work on the digitalisation of the system and in particular for cross border connections to speed up the deployment of the European Rail Traffic Management System. All the experts and train enthusiasts in Europe know this by the name ERTMS. I’ll simplify here, but this is basically a system that makes it possible to use the same signalling for trains all over the EU.

One would think that was already the case. Instead, it is quite the opposite. As I mentioned on other occasions, rail systems are the heritage of the national systems, and infrastructures, including those for signalling, have been historically very different. So, this is one of the big projects to make sure rail traffic in the EU is governed by the same rules, with great benefit to its efficiency.

We are arriving in Amsterdam. It’s raining cats and dogs today and I have zero photos to show. Big welcome at the central station, for the first time with a red carpet. We totally deserve it! We also meet Albert, one of the Instagrammers who travelled with us from Lisbon to Bolzano if I remember well. He came to say hi, and since tonight there are no other engagements, I think I’ll go get a beer with him, and talk a little about photography.