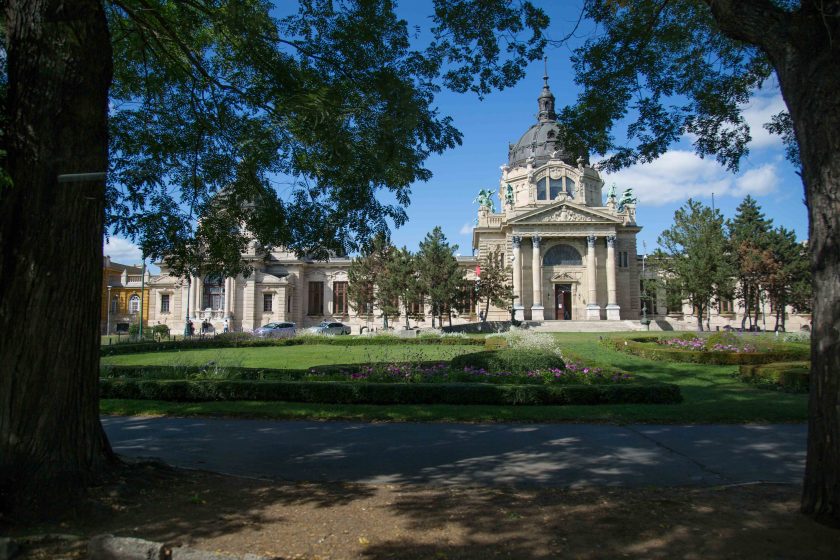 Where I tell why this is a special day and I get a big philosophical, I learn some things about Budapest, and we spend the first night on the Connecting Europe Express

Today is a special day on the Connecting Europe Express for at least three reasons. First, we are doing to do our first overnight trip, from Muszyna to Warsaw, where we should arrive tomorrow morning at 8h. It isn’t the first time I sleep on the train as I had the chance to travel on the famous Trans-Siberian line in Russia a couple of years ago. It’s the first time in Europe though. We’ll see how it goes, tomorrow I’ll have a better idea.

Second, this also means that we are doing the longest consecutive stretch on the train so far. Exactly 24 hours. But at this point this shouldn’t be a problem, especially if we can get some sleep.

Third, today we are crossing four countries in one go. We start in Romania, arrive in Budapest and across the whole of Hungary to enter Slovakia for the second time on this trip, and then we enter Poland. Four countries in 24 hours is not bad at all. I don’t know if we are going to cross more borders in one go in the coming segments, here we take things day by day.

Finally, another reason today is a special day (Alright it was four reasons, three sounded more SEO friendly), is that it is day 18 and we are exactly half away through our epic journey! Day 18. You know that feeling, when you think time is flying, or that other feeling, when you feel like time goes by very slowly? Well, in this case I can’t really tell.

In a way it seems like yesterday we were in Lisbon for our departure. All the capitals, the cities, the pennants we have collected at every stop. All the events, the press conferences with Ministers and all, the late arrivals. All the dinners, the quick touristic visits, and also all the fun with friends and colleagues on board. Just last night we spent the last two hours before our 00h30 arrival in Arad doing karaoke in the conference coach. What else would you do on a train at that time in the night?

All of this made the journey kind of hectic, hence the perception that time flies.

On the other hand, we are constantly on the train, lullabied by its rhythmic tu-tum tu-tum, tu-tum tu-tum. It’s like a giant mechanical heart merging with my heart made of blood and flesh, as one couldn’t beat without the other I get close to its overwhelming clock. We get very little sleep because of the tight schedule, therefore have very long days, and fatigue starts kicking in in the form of dreamy dizziness. Even the initial enthusiasm starts changing into something more similar to a routine.

It’s always stimulating to arrive in a new place, don’t get me wrong. But the feeling is that this is not new anymore, this is my life now, these are my tasks. We are so much more adaptable than we ever imagine. I always said this to people that are worried about travelling, or to tackle a little discomfort, or of change and novelties in life. The first step is always the hardest, then we just adapt. No matter what happens.

All of this also makes time slow down, it changes its perception, as time is made of perception exclusively.

Anyways, enough thinking. The important event of the day takes place in Budapest. We get there around 11h30 AM and a press conference takes place with state authorities from the Ministry of Transport, the Foreign Ministry, and the Prime Minister office. As usual the symbolic importance of the Connecting Europe Express for the role rail transport should have in the sustainable and smart mobility strategy of the EU is highlighted.

For Hungary, investments in high-speed rail travelling are a priority. But also the importance of cross border connections towards Romania (and therefore towards Bulgaria and Greece, at the outskirts of the EU) comes up. Hungary is in a vital position to make sure the whole continent is connected, for both freight and passenger rail transport.

After the press conference, the Hungarian rail operator kindly organised for a few of us a quick visit to the city. Unfortunately, we manage only to see the “Pest” part of the capital. The two parts, Buda and Pest were united in one for the first time in 1873.

It goes without saying that Budapest is a city with a lot of history. We all know about the Soviet-dominated period and 1956 attempted revolution. The holes of the bullets made on that 25 October, also known as Bloody Thursday, can still be seen on the Ministry of Agriculture Building, located along the Kossuth Lajos Square and directly across from Budapest’s iconic Parliament Building.

However, today with our guide we discussed a couple of curiosities. The first is the long-standing rivalry and friendship with Vienna. The architecture and cultural movements always mirrored those of the Austrian capital, a little bit because of common roots (which are felt still today, I am told), but also because often emperors of the Austro-Hungarian Empire favoured Vienna over Budapest. Budapest was not allowed to have bigger and better buildings, or to build a railway with two lines for that matter. The latter was to avoid an efficient military mobilisation.

So Budapest has been chasing after Vienna for a long time, resulting in a similar architecture, but also other types of rivalries. For example, Budapest has the second oldest zoo in Europe, probably just because Vienna has the first.

This lasted until the end of World War I when the Empire lost. The rebuilding of the nation started from there, with more emancipation from the previous capital. One of the things that changed dramatically with the end of the Empire was the railways. Building a railways network with Budapest at its core has been part of the process to reconstruct the identity of the country, along with many other aspects of course.

Another thing to know about Budapest is that it is also called the City of Waters, because it is built over more than 190 thermal springs, and there are over 1000 bathhouses in the whole city. The oldest bathhouse dates back to the Ottoman Empire occupation, in the 15th century. Hungarians take great pride in their knowledge of thermal waters therapy.

Unfortunately, I didn’t have the time to taste the local cuisine, otherwise I would have certainly looked up a place for a good Goulash. We can’t have it all, this is also adaptation.

In the early afternoon we depart again, crossing the whole country which seems to be pretty much a big flat agricultural area. So, a lot of cornfields, again, apparently it is corn season, and other typical views from an agricultural area. On we go, towards Slovakia.

When we get to Kosice in Slovakia it is almost dark. It’s 7h PM. It’s also getting colder now, for the first time it feels like we are leaving the south of Europe. On the contrary, the welcome is very warm. We can witness yet another traditional dance and exchange pennants in a cheerful small station.

Lovely end of the day, let’s get ready for the first night on the Connecting Europe Express.