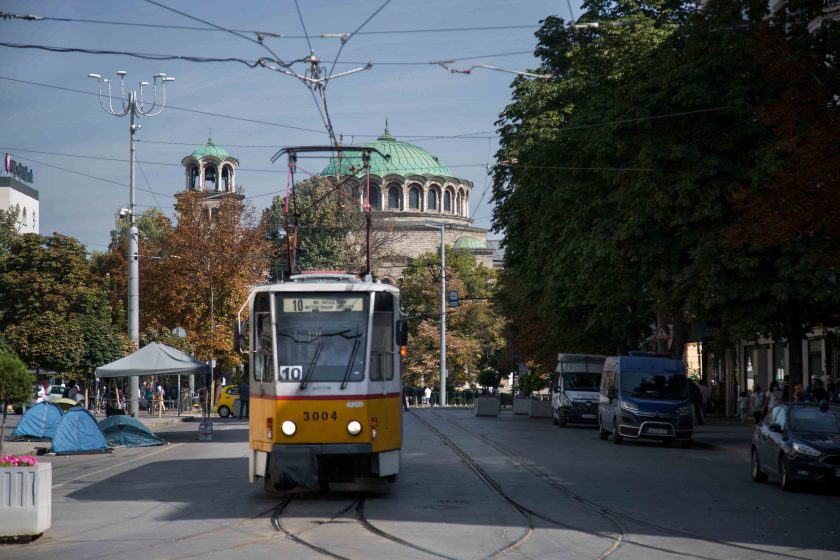 Where I visit Sofia and go shopping Bulgarian wine, I learn a lot of unexpected things about issue of big transport projects, and the Connecting Europe Express reaches the Danube again after crossing the whole country.

It’s a late arrival to Sofia on day 14. About 11 PM, a few handshakes with a small and kind welcoming party, and we all go to rest at the hotel. On the morning of day 15 there is time, a precious word during this journey.

This means I can go for a walk, visit the centre of Sofia, and take photos.  Always fun. I pass by some of the city parks, which have statues scattered all around. It reminds me of other cities I visited in Eastern Europe and Russia. Is it a cultural thing of soviet times, or even before that? I make a mental note to go and check this out, one day (I have a lot of similar mental notes).

Then I look for a local wine shop, because Bulgaria is a widely underestimated wine country. But I know there are some great wines and great local grape varieties I want to try with my colleagues on the train. Yes, the after-work time comes also for us, although late, and the train is always running. So, it happens on the train.

Finally, before heading back, I can’t miss the opportunity to get a Banitsa, a traditional pastry dish filled with cheese. Normally taken warm for breakfast by the locals, but for me it is a perfect lunch, even cold. Yummy!

The official event at the station with the Bulgarian Deputy Minister of Transport Hristo Alexiev and other authorities goes very well. It’s actually the first day in office of this government, so there are many TVs and media around the Connecting Europe Express.

I also get interviewed today, it’s happening quite often since the beginning of the journey. There’s a lot of curiosity about those people who stay on the train for a long time. So sometimes it’s me, as the blogger and photographer for the team. Some other times is Desiree, the heart of the Connecting Europe Express, and main contact person for the whole organisation on the European Commission side, together with Roxana (they are inseparable in fact).

Sometimes it is Astrid or Yvonne who gets interviewed, the two assistants who are incredibly helpful for every need of every passenger on the train, resilient and always in a good mood. I mean, we are talking of 12 hours plus of non-stop work on the move with no days off for 36 days here. People with a good spirit are highly appreciated! I should mention Femke as well at this point, who doesn’t accept interviews apparently, mostly because she is always working and taking care of everyone, including myself! She is the brain of the logistics for all events.

But despite the fun interview with the train passengers, the main issue under discussion remains the state of Bulgarian railways and its future outlook. And here today I learned some things about this sector, and probably not only this sector, that don’t come immediately to mind.

I didn’t listen to all the speeches, but then I got to speak with some of the experts here and there, and it turns out one of the main problems is stability.

Railways, and in general transport infrastructures are long term projects, at times ventures that need 20 to 30 years to be finalised. Therefore they are in need of stable leadership and continuity of work. In countries where governments and the establishment of government-controlled companies change often, there is little focus on projects that are apolitical by nature.

Another issue which I would never thought about, and this is true for Bulgaria as well as for other countries in Eastern and Central Europe, is that everyone focuses on the connections that lead to the centre (of Europe). It comes naturally because that’s where the biggest markets for both freight and passenger transport are.

The problem is that what is going towards the centre for one, is going towards the outskirt for the other. So, it is a bit difficult for countries to put the same effort on both sides of the border on the same project. For example, Bulgaria wants to work on projects that provide a connection towards Romania, but Romania is more focused on projects that go towards Hungary, and so on.

That is why cooperation is so vital. People, private or public companies, investors, governments, whoever is involved in these kinds of ventures, need to speak, coordinate, commit on projects, and then maintain these commitments for a long time and notwithstanding the change of governments.

You see how complex this can be? Even within the EU and with the support of the EU and other international institutions. Support that comes in form of help with coordination, feasibility studies, expertise, financing and more.

Often people think the main issue is the money, and of course to a certain extent it is. Without money nothing gets done. But I learned that often even when the money is there, countries lack the capacity to carry on projects in terms of human resources: engineers, advisers, projects leaders. Quite surprisingly, one of the biggest fears is to have more funds available than what can actually be consumed.

Strange, one might think. But upon deeper reflection, not that much. Every human undertaking has people behind it and their will and capacity to shape the world. For the better or for the worse is also, and exclusively, a people choice. Clearly, this world, at least in Europe, is in need of good engineers to take us towards a future of sustainable and efficient mobility.

Speaking of which, today is also the first day of the Mobility Week, which runs until 22 September with more than 3000 events in 50 countries. Go and check it out, you are very likely to be close to one of the events, and perhaps even to the passage of the Connecting Europe Express. We’ll look out for a wave of your hand. In the meantime, we ride at a very slow pace through a beautiful green mountainous area with deep gorges, and then through the Bulgarian countryside, rich in autumn colours.

We are arriving in Ruse, a nice little town on the Danube, right at the border with Romania, for the night. Here we are welcomed by a small but kind and enthusiastic party. A local organisation show us the posters for their annual ex-libris, or bookplate, competition, and the book of all previous winners. The theme this year is, guess what? Trains!. We are looking forward to seeing the results! This is one of the many gifts and surprises we receive at every stopover of the train.

In the morning in Sofia, they showed us a stamp dedicated to the Connecting Europe Express. In Croatia, they gifted us a reproduction of the Orient Express ticket. In Greece with a small owl, the bird closest to the goddess Athena. Everyone found a way to take pride in their culture, and share their European spirit by celebrating the arrival of our train.

Here between a drink and an appetizer, we get to see a real collection of memorabilia, including the whole train that was built in 1902 for king Boris III. It is kept in very good conditions, along with other antique locomotives and train cars.

Ruse borders Giurgiu, the Romanian town on the other side of the Danube, and it is an important node for transport. But more about this tomorrow, which is going to be a big day.