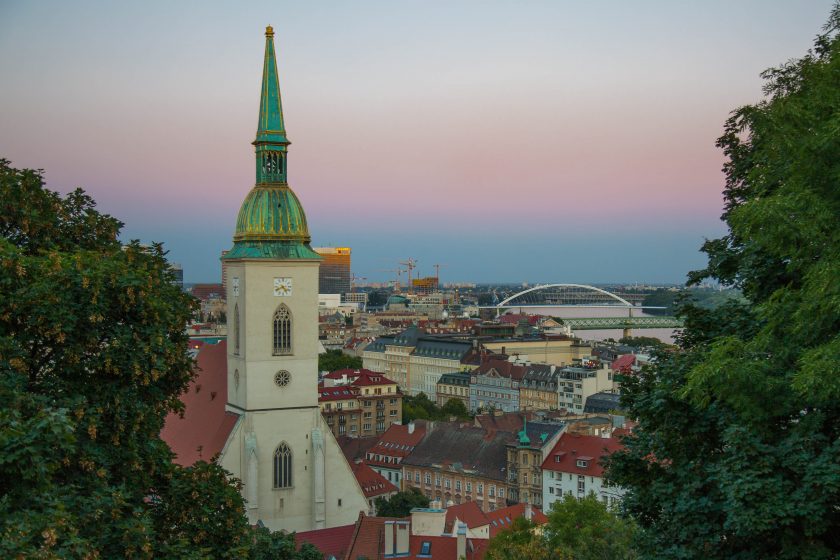 Where I mostly give my two cents about the meaning of the integration process taking the rail system as an example and we get our passports checked for the first time on the Connecting Europe Express.

The early arrival to Bratislava was somewhat regenerating. I had the time to do some sport, good after a few days where my only activity has been going from the panoramic coach to the dining coach (renamed The Office), with sporadic appearances at the conference room to take a photo of one of the many seminars taking place there.

After some fitness, time for a walk. Bratislava has a nice castle with a view over the city and the Danube river. It’s also very lively, with many bars and restaurants all around the city centre, the castle and along the Danube. Pretty and relatively small, it can be easily visited in a day if sightseeing is all you are asking for. A pint of local beer, which is pretty tasty, cost only €1.90. Just saying…

In the morning we hop on the Connecting Europe Express at 6h55 AM with a busy day ahead, two border crossings, a ride through Hungary, and lots of events before arriving in Zagreb. But before all that I get to speak with Libor for a while.

Who is Libor? Oh, just the guy who organised the whole logistics of the Connecting Europe Express. He is THE train guy, he knows everything there is to know from policy to engineering, from technicalities to the history of rail in Europe. An endless well of information which, like it or not, cannot be drawn on the canvases of these pages.

But I can tap into it from time to time, as Libor also travels with us for almost the whole journey. That’s what I did this morning, when he told me that time ago, before World War II, a tram line existed between Vienna and Bratislava. In a couple of hours or so it was possible to travel between the two cities. A kind of prelude to European integration?

For obvious historic reasons that line was closed, and never re-opened. Later, along that closed line, the Vienna airport was built, which is kind of funny because the two train lines that are in use nowadays do not pass by the airport. This is something that is clearly considered highly desirable, to connect different modes of transport, especially rail with airports and ports. Well, the strange twists of fate in the history of infrastructure building.

I mean, this made me think that in the end it is all about an integration process. For decades, or more when it comes to rail, every nation made its own rules and built its own infrastructures, with little worries about international travel and little regard to what others were doing. It was possible of course to cross countries if you had a lot of time at your disposal. But then again, the struggle with time is a thing of modernity.

Now all those rules and infrastructures have to become one single, European harmonious system. Think about the dimension of it: locomotives, gauges, electrical lines (if they exist), signalling, communications, interlocking and many other technical aspects of the functioning of railways.

Some aspects of national systems might have been compatible, or close to it. Some others not at all, and there are so many countries, we are crossing 26 of them on the Connecting Europe Express. It isn’t possible to start from scratch. The service cannot be discontinued, and I imagine it would be too expensive to start from scratch anyway. So, the only way forward is the natural evolution of the system, by modifying existing infrastructures, creating the missing connections, harmonizing the rules.

It’s a perfect example of integration process. It takes time, perhaps generations to change, just like with people.

The complexity of railways and how their future should look like came up in Hungary as well, during the press conference held on the occasion of our arrival in Sopron. The country is obviously a central node for Europe, with its geographical position, and with traffic above EU average for freight, but lagging behind in terms of passengers services.

First, we went to visit the traffic management centre, which looked much more high tech than I’d expect. This is innovation. In the past, every station had to be manned to control the interlocking system, while now everything is done remotely from here, for a vast area of the country. This brings higher productivity and efficiency, and reduces costs. The busy lines on the screen however were mostly about freight transport.

Indeed, at the press conference Ines Ayala Sender, the TEN-T coordinator for the Rhine-Danube corridor, pointed out that a lot has been achieved, but lots still need to be done in Hungary both from a technical perspective and in terms of quality of services, and competitiveness.

The Hungarian State Secretary for Transport Dr Laszlo Mosoczi highlighted the central role that rail transport will play in the future, especially for a sustainable future, and the need to have high-speed connections and affordable services both within and outside of Hungary.

Right now there is no high speed in Hungary, in the second part of the journey through the country we were pulled by a diesel locomotive.

The integration process takes time, both to change the rules and to build infrastructures, but it also takes the willingness to work in the right direction. In the case of climate change, time has basically run out.

Well, kind of a longish and serious post this one. What can I do, I just go with the flow of the day. Now we are getting towards the third locomotive change of the day and second border crossing in only a few hours. Eh, complex.

Speaking of integration processes, for the first time during the whole journey we got our passports checked, police from both Hungary and Croatia came on board at the border. That’s because Croatia is not in the Schengen area. Interesting, I was kind of forgetting about it, but not everywhere we can move from one country to the other so easily. The process obviously took quite some time for the whole train.

Dinner is served on the train. We will arrive in Zagreb around 8h30 PM and I am told a tour of the city has been organized for us. I am excited about that!

Our mascot Chickee is also travelling on the Connecting Europe Express and having his own special journey. Here are some of its adventures.