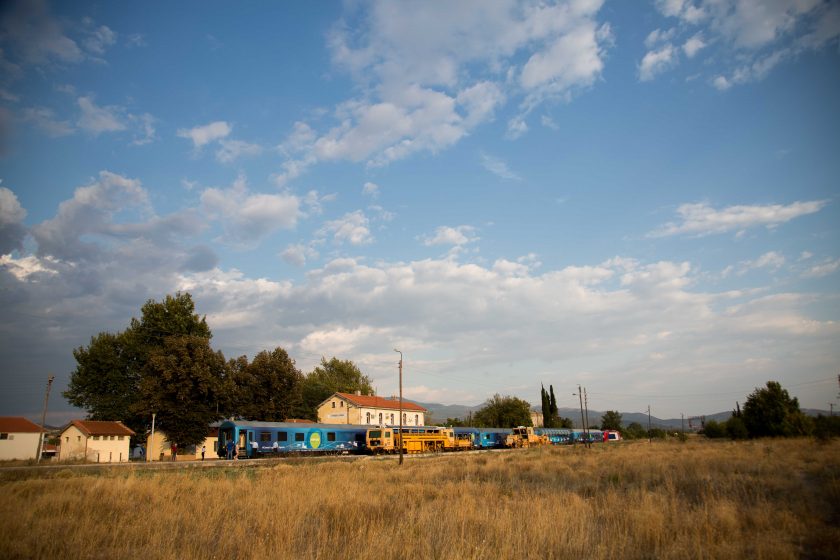 Where I briefly talk about Athens Acropolis, I inexplicably find myself talking a lot about food, and the Connecting Europe Express passes by a stunning territory between Greece and Bulgaria

Thank you Athens for being so beautifully chaotic, and full of cats, as usual. It’s always a pleasure, especially going for a cold beer and a walk around those parts of the city where the Acropolis is visible. I didn’t go up close, but I remember very well my first time.

The Acropolis in Athens is one of those landmarks I have underestimated for a long time as something for mass tourism, not for independent travellers such as myself. Pff…moi? Non non. But of course I was wrong. It’s impressive up close, and from there you can really imagine how life could have been those 2,500 years ago, at the dawn of our civilization.

Unfortunately my hotel messed up and I had to change hotel, which was in a different area of the city, from where I didn’t have a nice view… long story short, no photos. What can I say? Google it?

Anyways, morning arrives sooner than expected and the Connecting Europe Express is ready to leave from Larissis Central Station. This is quite a tiny station for such a big city as Athens. There are basically only two tracks. My hotel didn’t even know where it was, they kept asking me if I wanted to go to the bus station. The Minister was right last night when he said Greece’s rail sector is lagging behind (see the previous post).

Let me offer a bow full of gratitude to the Greeks who gifted us with the best train food so far. Don’t get me wrong, everywhere was nice, we haven’t been mistreated for sure. But today it was wow, wow, wow! Both in terms of quality and quantity. And I loooooove Greek food. So, I stuffed myself, for a change.

Let’s talk about food for a moment. It has been one of the main concerns in the hearts and minds of several passengers. Are we going to get food? Are we going to have breakfast? Is there coffee? …

Let me tell you: if something is not missing from this train is food. It’s almost as if our hosts, country after country, capital after capital, stopover after stopover, are in a competition for who’s going to get us fatter. I’ll be afraid of getting on my scale when I’ll be done.

Seriously, We are eating constantly, often out of habit or boredom. Because yes, we are having fun, yes it’s a great experience, and yes we are carrying an important message around Europe. But we are also sitting on a train 12 hours per day or more. So we eat, it’s just organic. There are only so many activities we can keep busy with.

After taking and editing photos, writing, replying to emails, talking to random people about random things, often trains… we eat. And then again, all those things can be done while eating, so why not do both at the same time? Get the gist of it? No need to be worried about food. I’d be more worried about getting a proper intensive fitness session after 36 days on the train.

Yet, this is all part of a journey, isn’t it? The food. What better expression of cultures than trying the local food. There is so much to discover in it, the origin of food date back as much as the origins of civilisations. It tells us about who has been dominated by whom in the course of history, and who left traces of their presence. It tells us about the identity of a country, or a region, or even just a city sometimes. It tells us if this identity is changing with new influences which one day might be considered the rule.

Think about Asian food for example, and how it is becoming part of the basic diet in some Western countries, such as Australia. Not yet in Europe perhaps, it is still considered exotic. But there are the so-called fusion restaurants, and change is on its way. It might take generations, but in some time people will call local food what today we see as extremely unusual and innovative.

So, food is knowledge, it is tradition, it is future, and it is an enjoyable way to discover the place we are visiting. Bottom line, try the local cuisine. I always do, and of course I won’t always like everything, but most of the time I do, and I am very happy to try something I didn’t know before.

The Balkans, Greece, and now going towards Bulgaria are incredible places for food, with a huge amount of different cultural, and gastronomic traditions, and innovations coming together.

Enjoy! And for the Connecting Europe Express passengers, be assured, there is food.

In the meantime, we are enjoying our journey, which proceeds slowly as the connection with Bulgaria is a segment in high need of an upgrade. No electrification, we are pulled by a diesel locomotive. A cruise speed of 50 Km/h or so, and only one track. Too little for a central node of the Orient-East Med TEN-T corridor. Especially considering that a several Km long queue of trucks running in parallel to our rail track at the border, waiting to cross.

The way back to Thessaloniki is the same we covered yesterday, but just after it, the territory in the very north of Greece towards the border with Bulgaria is stunning. One that I would definitely take the time to visit.

On the left side we can see a beautiful mountain, windmills on another one a little further on. On the right side there’s a lake populated by flamingos, which we can only see in the distance with naked eyes. It’s the Kerkini Lake National Park, a great discovery.

We arrive in Strymonas, just before the border. Suddenly the sky and the colours are incredible, the sun is slowly going down, and the backdrop is just ideal to take a couple of shots of the Connecting Europe Express.

Then the unexpected: two old friends who didn’t see each other for 40 years meet by chance on the railways of Stymonas. One is a trainspotter, just curious about the train, the other is accompanying us through Greece as part of the staff of the Greek railways. What are the chances?! But the world is small, even smaller if we take people by train to such nice regions.

Now the sun is going down and we are in Kulata, the first town on the Bulgarian side. We are surrounded by mountains in something that looks like a small canyon. But I am afraid we’ll reach Sofia immersed in the nights of this great corner of Europe.