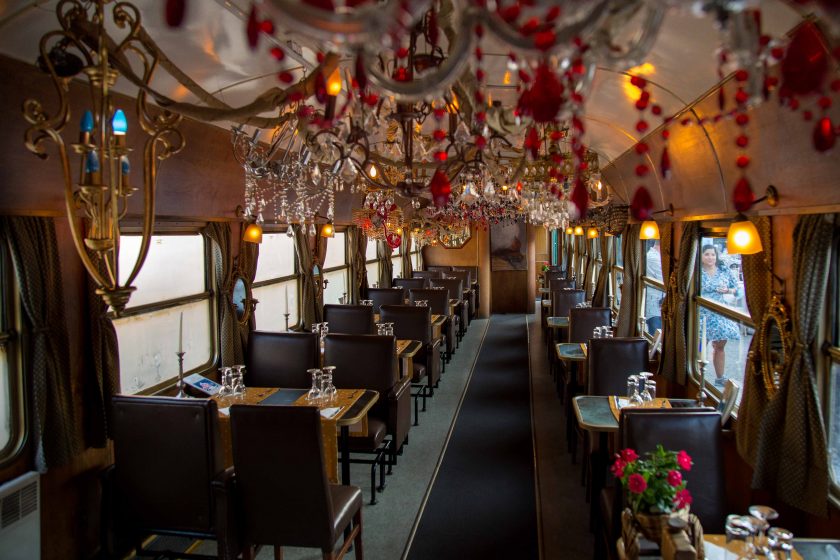 Where we leave early, too early, and the Connecting Europe Express crosses Macedonia and enters into Greece following the footsteps of the legendary Orient Express

Despite the late arrival, it was about 11 PM, the welcome in Skopje has been very warm, and full of media and TV cameras. There has been speeches and promises of renewed cooperation with the EU and investments in the transport sector, specifically rail sector, especially on the international connections towards Bulgaria and Albania.

Good news. Furthermore, I am told by some of the colleagues who were there, that at the Balkan Rail Traffic Summit (see the previous post) a memorandum of understanding was signed by all Western Balkans countries’ Transport Ministers on future cooperation and infrastructure building. More good news.

The only bad news is that we are all dead tired, and happily go to the hotel, some to reply to a few dozens of emails, some others to edit photos, and in my case to post on this blog, operation requiring a good and stable internet connection. Perhaps some got to go to sleep right away, who knows.

This means no time to even go for a quick walk in the city centre. A pity, because Skopje is not really at the top of my list of places to visit, not least because it isn’t easy to reach. I would have loved at least to have a look around, feel the vibe even though briefly. Next time, I guess.

The alarm clock goes off at 5 AM. Both the Connecting Europe Express and its passengers are in a lethargic state. The train slides quietly through darkness at 6h04 sharp. It takes at least an hour, spent in almost absolute silence for the light to uncover a new day, a new view. We are going south, and this part of North Macedonia reminds much of Greece, unsurprisingly, but also some regions in the south of Italy.

The predominant colours now are yellow, and light brown. The land is almost barren, and dry. Sometimes a river cuts through the hills in our direction, then decides to follow briefly our trajectory in a parallel run, for then taking a new, unexpected turn and quickly disappearing from our sight. With the rivers there are some canyons, or green fields, and farms, and a lot of small, probably private vineyards. I immediately think I have never tasted Macedonian wine.

After a few lazy hours dozing on and off in front of the window, we arrive at the border. We get the last stamp on the passport for the entire European trip and re-enter the EU. The usual change of locomotive takes place.

We are still on one of the routes of the Orient Express, the leitmotif of this segment of our journey. The name is by now legend. A direct train that used to run from Paris to Istanbul, although one of the routes reached Athens, exactly as we are doing today.

The Orient Express was a symbol of luxury travelling, both in times when travelling was hard and dangerous, but also in the late 20th century. The direct Orient Express route has been reduced over time until disappearing completely in 1977. It’s been called a victim of high-speed rail and low-cost air travel. However, it is still possible to retrace it by putting together several shorter routes, operators and connections, from one capital to the other.

It goes without saying this is complicated. I wonder if one day, with efficient Europe-wide connections, retracing the Orient Express route will become easy, affordable, and an accessible dream travel itinerary for many. Not anymore a symbol of luxury, but a symbol of unity and a comfy and sustainable way to visit this part of the continent.

But for the nostalgic, the luxurious dining car where scenes from the famous movie “Murder on the Orient Express” can be seen in the OSE Museum of Thessaloniki. Or so says Wikipedia, although some of the passengers of the Connecting Europe Express went here today, during our short stopover, and didn’t notice such luxurious train car.  Instead, we would get it later on, at our arrival in Athens, as the setting of a very nice dinner organised for us.

In Thessaloniki I didn’t go to the museum, I went to check out the sea and the town, even though I had very little time. Just because I have many Greek friends, and they all spoke so dearly of Thessaloniki so many times to me. But I guess they were talking about the liveliness of this city. And this I cannot confirm. But there was an international film festival going on, a good sign.

After Thessaloniki the landscape starts to change quite often. First we go through a hilly area, with lots of vineyards and olive trees. We are close to the sea, perhaps for this reason the land is much greener than before. Then we cut through the centre across a vast flat and agricultural region. In the end, we go a little bit higher, overlooking vast fertile highlands, and a set of tunnels help us regain the sea in Lamia, as we tackle the peninsula of the tip of which Athens stands.

Here we cruise at a decent speed, although not yet high-speed, and with a similar, beautiful south-European view until the capital. Here the Greek Minister for Transport Kostantinos Karamanlis gives a speech, openly saying that the rail sector in Greece is lagging behind and needs upgrades. What better occasion to push for the agenda for the sector than during the EU Year of Rail, and the symbolic visit of the Connecting Europe Express.

Finally we all sit down and focus on our dreamy dinner on the Orient Express.