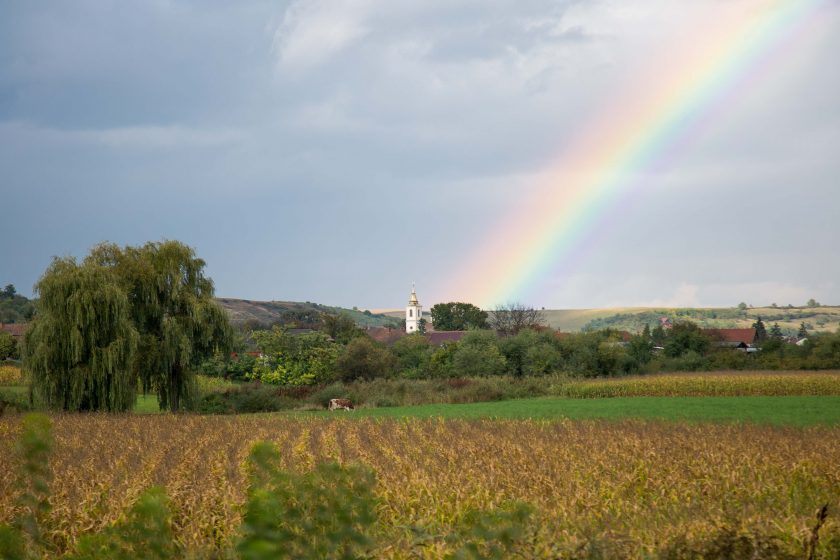 Where I survived a food marathon, perhaps even won it, and the Connecting Europe Express crossed amazing Transylvania.

Well, if you have gone to the end of yesterday’s post, you know we were all invited to a gala dinner last night. By all I mean anyone on the train who wanted to sign up for it. And it was a blast! I didn’t know in Romania food was so good, and the amount so large, and in the case of this particular train, served so often.

But I am told it is very much Romanian to welcome guests with food, and appreciate good food, and trust me when I say we appreciated with them. The pace has never been so high. We got served a fully-fledged meal pretty much every second hour, both on the train and outside of it. I feel like I could roll from one coach to the other.

The gala dinner was an international style buffet, so there was a little bit of everything, but if I have to point at something in particular, I would say the chocolate rocky fingers, or whatever that amazing dessert was called, had the most success among the participants. A combination of crunchiness, chocolate, and nutty cream that melts in your mouth. At one point we had to ask for more, certainly not out of hunger.

Unfortunately the night was short, at least for me, as the Connecting Europe Express is leaving at 7h50 in the morning. Today we cross the whole of Romania, and it will take about 15 hours! A long ride, you say? Well, yes, indeed it would be the longest ride of the journey so far. However, I wondered if I should even bother to say it, as tomorrow we’ll have our first overnight trip. So, today’s record will be broken soon. The state of mind of long term passengers on this train after all these long term rides is something I am looking forward to witness, and reporting with care and a great amount of detail.

But that’s another issue, let’s go back to Romania. I believe it is one of the most underestimated, and underrated destinations for holidays. I also believe that tourists couldn’t be more mistaken. I myself never had the opportunity to visit the country properly, but anyone I know who had the chance to visit it came back in awe.

No kidding, Romania is picturesque,  has an amazing nature, it is multicultural and has a great history, it is a country all to discover, and an incredible gastronomic destination, in case that wasn’t yet clear.

Bucharest can be visited quickly, even in one day only, if you just want to do sightseeing. But I had this feeling it’s a big party city. There are so many different types of bars all around. Bucharest is also its own region, while for the rest of the day we go through amazing Transylvania. More specifically we stopover in Brasov, Sibiu, Copsa mica, Cluj-Napoca, Oradea, and Arad.

The first part of the trip Commissioner for Transport Valean joins us, so there is a lot of media on the train, interviews and excitement. People talk about the transport issues of the country, which were covered also in yesterday’s conference. We follow a serpentine route through a mountainous and green forested area, one of the gems of Transylvania.

In Brasov the VIPs get off the train, and everything becomes quieter. We have a lot of time to look out of the window. As I said in my previous post, Romania has a widespread rail network, so it can be visited by train, although it might take a little bit of patience, and time.

The landscape changes too, now we go through a vast and hilly countryside, with many cornfields, cows and sheeps scattered around. In the distance, on our left side, we see the mountain range of Moldoveanu Peak, the highest of the country with its 2,544 m. but clouds are covering it so that we can’t spot the tip of the mountains.

The weather is for the first time a little cloudy and rainy. I welcome it. It’s a good change also for the eye, and for photography. The sun however regularly filters through the clouds, especially late in the day to gift us with beautiful and warm colours. The last part of the journey, before the night comes to hide everything in its embrace, is like the Shire in the Lord of the Rings movie. It looks a peaceful countryside, somewhat wild and isolated, we even spot some deer, but mostly herds of sheep.

The most impressive thing however is the hospitality, which is unprecedented. I won’t make a rank of places, because at every single stopover, and we had five of them before getting to Arad, we were welcomed with enthusiasm, cheerfulness, eagerness, mayors, a mountain of people waving at us and interested in visiting the train, so many trainspotters, music, folk dances, Romanian and EU and local flags waving in the wind, but above all, and you know what I am about to say: food! A lot of amazingly tasting food!

At one point, I just don’t care anymore. I completely accept it, I stop fighting it, and I embrace it: I will eat it all! The challenge is on, with no prisoners and no care for consequences (although no one actually challenged me).

So, I dive in some Sarmale with polenta, a delicious meat rolled in cabbage; and some Branza de burduf and many other addicting local kinds of cheese; and how about the Salam de Sibiu, or the smoked and fried pig skin, called sunca de porc? Mmmmmmmmm… For dessert I pick a placinta de casa cu prune, a plum pie with a whole prune inside. And there are so many other delicacies, it’s never-ending happiness!

It goes without saying, but all of this is washed down by some local wine, which is more than decent, or some Palinca, a kind of grappa, or Visinata, a kind of sherry. Boom! We take a short break only at Oradea, where the local authorities managed in less than one hour to greet us at the station and take us to visit the main square in the city centre, a great example of a multi-cultural environment. The square hosts two catholic churches (Greek and Roman), a greek orthodox church, a synagogue, and a Lutheran church.  Fantastic. The city is also famous for its art nouveau.

But then back to food! Have I won the Romanian food marathon? I don’t know, we will arrive at 12h30 in the night in Arad, full and a little drunk perhaps, and I have learned anything by now, there will be food there too. But I surely have appreciated it, along with the great hospitality, and so did all the other people on the train.

Romania is definitely a place to visit. It goes straight to the top of my personal list.

That’s it. I am going to eat something now. Tomorrow we will enter Hungary!