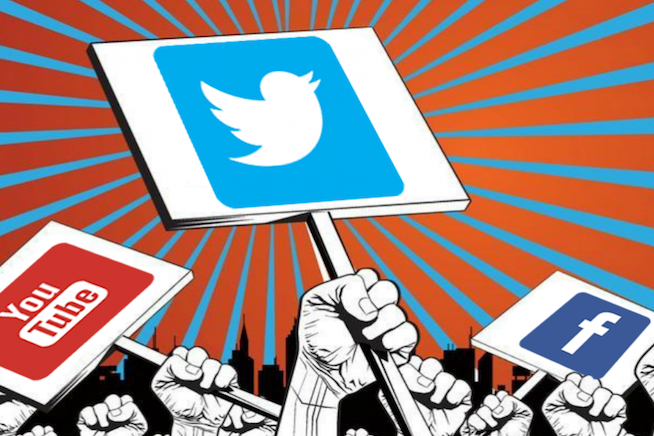 One, I have been working for many years in the EU politics realm, and in communications. Two, I have discussed issues such as trade agreements, immigration, EU integration, Brexit, and whatnot millions of times, in and out the social networks. Three, I’m Italian.

So? What about being Italian? So, right now most of my Italian connections are going mayhem on the socials about what’s going on in the country, with the new government and all. This made me reflect upon the need and/or desirability to be involved in such debates. The answer is no, but let me explain why.

Indeed, it’s kind of a tough time for democracy, and let’s be honest here, for Italians in particular:  with the team out of the football world cup, they need something to complain about for the summer. Alas, it is politics, and where do they do it? Mostly on social media where else, creating some of the most time-consuming, nerve-wrecking, and ultimately useless discussions, in which I will never, ever be involved again.

This is not an attempt to ignore what happens in my country because I am traveling and all, and I don’t live there. I haven’t lived there for the past 15 years. The simple fact that I am now somewhere around the world instead of somewhere in the EU changes nothing. Although, from a certain perspective, my interest in politics is not bound by national borders, just my vote is.

No, the real issue rests in two different points: first, my democratic credo; second, culture, and a belief that the history of democracy is, and must be made by the masses, as opposed to single individuals, or parties, or politicians. Let me break it down.

See, I am a democrat, even though I do not believe democracy is a perfect system, or the most efficient of all, and god knows we would need some efficiency in the EU sometimes; still, I am a democrat. As such, I must accept the results of popular vote, even when I believe the new government will lead the country to a much worse political, social and economic position than it currently is in. The majority has made a choice. Small majority, big majority, it does not matter, as long as it is legal.

So, Trump has been voted US president, and the UK voted to exit the EU, and many populist or hyper conservative parties have won elections in Europe: all people choices. In Italy there is a new government made up by a former separatist, racist and xenophobe party; and by a movement putting up for election unprepared, uneducated and unskilled people, led by some kind of internet guru, who claim they will bring back transparency and honesty to a corrupted political system. Both parties have strong anti-Euro and anti-EU feelings, and make big promises about solving basic socioeconomic issues for the country. They allied, and their alliance makes up for the majority. This must be accepted. Now, they must govern.

Obviously, and this is as obvious as misunderstood by their electorate, they will not accomplish a single one of the things they promised. I don’t even want to say because they are dishonest or corrupted. Perhaps they will honestly give it a try. They just do not have the means to make certain type of changes in a whole society.

First of all, most of Italian socioeconomic issues are linked to international and global problems. Immigration, climate change, economic recession, high unemployment rates… no nation today can tackle all of this on its own, without talking and cooperating with other countries and economies. Take immigration for example. One of the first acts of the new government has been to close ports to refugees. Refusing help at sea is not only cruel, and immoral (and perhaps illegal), it is also useless to achieve the purpose of solving the refugee crisis, it will just make it more violent both in rhetoric and actions. This is clearly a global issue, or at the very least a European one. Other EU countries are as responsible for this as Italy is, even if they deny it or try to hide behind some lame excuses. The issue needs to be tackled in the right institutional framework, whatever the effort required.

At any rate, surveys show that Italians strongly support the action of the government, and specifically this action. Alright then. Italy must be allowed to become what the Italians want it to be. The majority of Italians that is. There is no other way. I feel sorry for myself, and the ones that do not like this, but that is how democracy works.

History is made by mass movements, or at least the history of democracy is. Politicians are just witty people, capable of surfing the currents of the ocean, and put them in an ideological frame of thoughts. However, they do not steer it, they only pretend to. The ocean steer itself, and change happens only with huge tectonic movements, or over a long period of time. Perhaps one day the current will change, and another class of politicians will surf it. For now, my guess is that history haven’t taught us enough, yet.

The so called democratic world, not only Italy, is slipping back towards some worrying type of populism, leading to closeness instead of inclusiveness, less understanding of each other, less cooperation with each other, and allowing nations to be steered by fear instead of reason. A world filled by empty promises by leaders who have no real solutions. The majority of people voted for this world. Democracy!

Democratic governments are just the mirror of the society they represent, and if they are not, they quickly become so. As famous journalist Indro Montanelli used to say, there is no need for better laws to change Italy, there is a need for better Italians.

There’s no point in the constantly whining on the social networks. This does not mean that constructive opposition should not be done. It should be done, through the right institutional channels. Democratic control is certainly needed too, just to avoid taking the real wrong turns. Good information is needed as well, for those who actually want to be informed, all the others they will just ignore it. I would go as far as to say that socials could be a forum for discussion, would that discussion be worthy of such name. But this is not what happens. Discussions on social networks are mostly deprived of content, and full of far too many tendentious opinions. Or, and this is even worst, they are just a competition at who can shock the most.

There’s a real campaign by the loosing side of the last elections to try and delegitimize the new government, with quite some empty arguments. This is wrong, and undemocratic. The government is legitimate, whatever one might think of the people in charge.

Italy is clearly polarized right now. Those who believe in this big revolution that is about to happen will not change their minds. They are also, in my experience, the less educated ones, the less understanding of politics, and the ones that complain the most about the unfairness of the political systems and how miserable it makes their lives. It won’t be long before they start complaining about this one too. On the other side of the spectrum, those who are now pissed at the majority, and desperate to fight their reasoning, their perceptions of reality, their hopes, through a plethora of somehow logical or ideological arguments. Such a waste of time. Change happens only when it is sought after. The majority doesn’t want change, they want a political system that does not represent them.

Finally, and this is my last point as to why I do not want to comment about politics on the socials any more, the polemics on those platforms do strengthen populism. The simple fact that certain acts, and people, are considered worth of commenting, does strengthen their legitimization as leaders and representatives. The same goes for their supporters, their opinion are legitimized by my answers. I will not give them that, I decided to ignore them! Let them learn by themselves, as it should be. I haven’t decided to forget, or to remain uninformed, or to avoid confrontation where it is civil and constructive. I just choose not to participate in the mediatization of politics through social networks. Since the beginning, it hasn’t done any good.

How could it be otherwise? How could Twitter, or Facebook, provide a platform for any constructive content at all? I am writing a long-ish article, and I barely manage to explain my reasons. How could 280 characters do any good to people that actually have a honest intention to understand each other? But I guess we live in a world where very few take the time to read, learn, understand…

I do not have a passion for football, but lately I am truly regretting the good times of Italy playing in the world cup, when all of a sudden everyone becomes an expert and a coach, and expresses an opinion about the latest match on Twitter. How relaxing was that in comparison, how wonderfully harmless. I blame the Italian football team for what’s happening, big time!

Well, with or without football, the ocean will keep moving. I hope the next change of current will be a gentle one, even if it takes time. In the meantime, those who want to go against the current have of course the right to do so. It is still a free world, for now. I believe the best thing to do is to set the example, by living and behaving as I think it is right, by being an inclusive person, by helping when I can help, by participating when I can participate, by actively work to change my surroundings, with or without the “solutions” offered by governments. Most of all, by staying the hell away from politics on social media. Influence can, and should start from very much below.