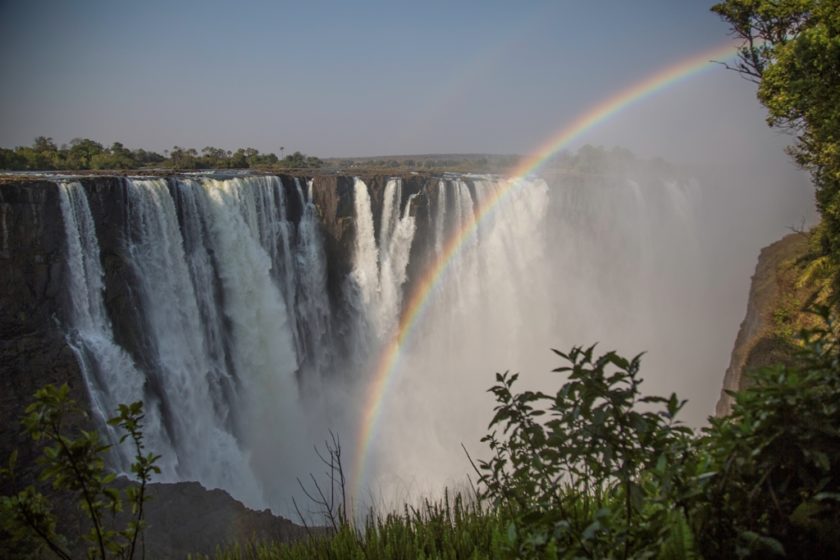 The beauty of Victoria Falls, and an amazing rafting experience on the Zambesi river. This is the real stuff for adrenaline junkies, lots of fun!

This article is part of a series of four, to describe a single travel itinerary that included Namibia, Botswana and Zimbabwe. The whole itinerary lasted three weeks, during which we (myself and four more friends) drove for about 5000 Km (including the game drives), and can be found on this online map.

In the descriptions, I’ll add useful information for the specific places. At the bottom of each article I’ll explain the organisation of the whole trip: when to go, renting the car, roads conditions, camping, safety, costs. One important thing right away though: book six months in advance at least, or you risk not finding any accommodation in the best spots, especially inside the national parks, or a good car.

Continues from Kingdom of Elephants

This is going to be the shorter of the four articles, because we stayed only two days at Victoria Falls, and frankly speaking, we didn’t have much time to discover Zimbabwe. The only curiosity being all the people on the street trying to sell you notes worth millions of Zimbabwean dollars as a souvenir from the hyperinflation this currency went through from 1980 until 2009, when it was practically abandoned.


Today, Zimbabwe does not have his own currency, and many other currencies can be used in the country. Obviously, those notes aren’t worth anything. Also, one thing I noticed is that this was the only place in the whole itinerary where I saw beggars and homeless people.

In any case, the beauty of Victoria Falls doesn’t need any presentations or explanations. The largest sheet of water in the world, with over 1.7 Km in length and an average height of over 125 m., Victoria Falls are part of two national parks, as they are on the border between Zimbabwe and Zambia.

They are also UNESCO world heritage. Their name is due to the westerner explorer that visited them first, David Livingstone, who named them after Queen Victoria. However, they also go under the indigenous Tonga name, Mosi-oa-Tunya, which means “The Smoke That Thunders”. On Zimbabwean side, they are called Victoria, on Zambian’s side with their original name, while UNESCO recognizes them both.

The water comes from the high plains of the Zambesi river and falls into a deep gorge along all the 1.7 Km front, creating quite a spectacular effect. In the period we were there however, the dry season, the falls were not at their full potential. This means less water, but more visibility. We were told in the rainy season there’s much more water, but the cloud of vapour from it is so thick that is almost impossible to actually see the waterfalls.

AMAZING RAFTING ON THE ZAMBESI RIVER

After the falls, the river Zambesi continues in a series of twists and turns, and it is rich in wonderful rapids for an amazing rafting experience. All rapids are level 4 and 5, on a scale that goes from 1 to 6. Serious stuff, and a lot of adrenaline. Even more than the falls, this was for me the highlight for the end of the trip.

On the last rapid, after a top-down decision taken at the summit of the raft, me and my buddy, we tackled the water on the most swirling side, and the whole raft flipped over, throwing all the eight passengers in the water. 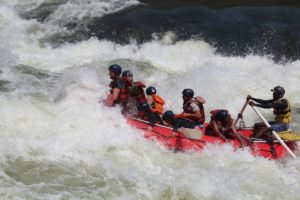 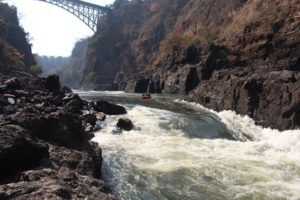 WOW! It’s kind of scary to be pulled down by the whirlpools. It doesn’t last long, but for those few seconds, until the safety jacket pulls you up, the feeling is that you are not gonna make it.

Then, you emerge, you breathe, you realize you are alive, and you start laughing while they come and rescue you. Really a lot of fun, nothing like those places where they promise emotions and then the rapids are like a little slide. The rafting experience on the Zambesi river is the real stuff, and I strongly recommend it. 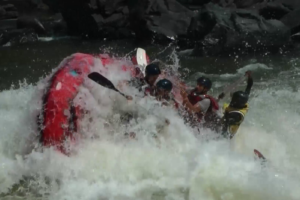 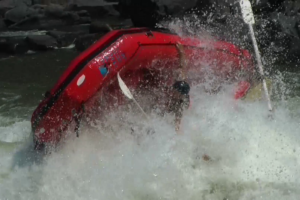 With this, the trip was over, time to pack up and go back to Europe, for now.

Some information about the organisation of the whole itinerary.

No doubts here, the best season for game drives is during the southern hemisphere winter. At this time, the climate is dry, always sunny and quite hot during the day (25 C to 30 C) and coldish during the nights, it could go down to around 5 C. But it depends on the area. Along the coast is colder and more humid, the more you move inland, towards Botswana and then Zimbabwe, the warmer the temperature, also overnight. During the dry season, animals gather around water holes, and it is much easier to see them, especially in Etosha. However, during the day they are more lethargic, for it is too hot.

It’s possible of course to book resorts, lodges etc. However, besides increasing the costs ten times or more for accommodation, camping in Namibia and Botswana is part of the experience.

I have never seen such beautiful and wild camping area, at the same time very well equipped with warm showers and clean toilets. The best thing of all is the feeling of isolation. In most cases, there’s a lot of space between the designated camping areas, and even when there are other tourists around, it never feels cramped, quite the contrary. Furthermore, excepted inside Etosha, camping area are just open and wild, you can hear the sounds of wildlife during the night, and in a couple of occasions we saw hyena footprints close to our tends.

If that’s scary, you can hire a car with rooftop tends, which are also much easier and quicker to set up. We were in five and we had two rooftop tents for four of us, while I slept in a ground tent all the time. It gets dark pretty soon in the winter season, around 6 PM, so cooking, having a drink, and chatting around a bonfire during the dark hours is another plus for camping, really cool. Finally, the costs, $10 to $15 per person anywhere, while sleeping in lodges and resorts is incredibly more expensive, sometimes several hundreds of dollars per night.

In most cases when camping you’ll have to cook for yourself. Water and food can be bought regularly in small towns here and there. But better to know in advance how many days of provisions you’ll need, and make sure there will be more shops afterwards. In the most touristic areas, like Etosha National Park, there are restaurants too. Camping management can provide wood for the bonfire for a couple of dollars, and in case of need often they sell food too, but it would be more expensive. As for fuel, there aren’t so many stations around, but the tanks of these cars are very big, and often modified to have even more capacity. We could drive for 1,200 Km with a full tank. In this conditions, refilling has not been a problem at all.

We did a lot of research before deciding on a car rental company. There’s several in Windhoek, and things to consider beforehand are: the company reputation (check online!), prices, condition of the cars (check everything on site!), unlimited mileage, insurance coverage, number of drivers, tank capacity, equipment included or excluded in the basic price such as spare wheels, rooftop tents, fridge if you are self-cooking, cooking tools, emergency tools etc… it takes a while to check all of this and compare prices. I will not advertise here, but at the end we paid €2,500 in total for 20 days rental, including a pickup fee of €500 as we returned the car in Maun, Botswana. Our itinerary was a one way only.

All the roads are dirt roads, sometimes really bumpy, sometimes proper off-road driving with huge holes and steep ups and downs (especially in Botswana), sometimes extremely sandy. Driving slow and attentively is imperative, also for the possible passage of wildlife, and particularly at night. Actually, it is much better not to drive at night at all, and it is not permitted inside the parks. We did see people who had accidents, exclusively because they were going too fast and they lost control of the vehicle. Also because you don’t come across other vehicles so often. They destroyed their cars and ruin their fun.

Experience with four wheels, off-road and deep sand driving is quite important as well, particularly in Botswana, even more particularly if you want to cross Savuti Chobe National Park. Lots of sand there, and a very warm and deserted place, getting stuck would be quite dangerous. If you don’t feel confident, then better to go around the south-east and take the normal road to Maun. Unless you are planning to sleep inside the park of course, in which case no choice. We only crossed it in one day.

I must say that absolutely nothing weird has happened to us, beside the occasional local person who tries to insistently sell you stuff. On the contrary, the locals we got to talk to were very nice and welcoming. However, the car company specifically told us to avoid stopping alongside the road when local people ask for help, as many robberies, sometimes violent ones, have been happening by using this trick. We didn’t come across any such situation. In general, we frequented camping areas and touristic places, feeling very safe. Some attention, as everywhere in the world needs to be paid in cities, such as Windhoek or Swakopmund.

I believe we managed to keep the costs as low as it gets, considering the number of wonderful places we visited and the experiences we had. The total cost per person for the whole three weeks trip amounted to about €3,000. This included: return flight from Europe to Johannesburg, one way flight from Johannesburg to Windhoek, one way flight from Victoria Falls to Johannesburg, as it was a one way itinerary; renting of the car (5 people for a car that carries 5 people), and fuel; all accommodations (mostly camping), and all daily expenses such as food, water, snacks, including few restaurants; all national parks entry fees; and all extra activities and tours. Tours included: sand boarding or quad driving in Swakopmund, a marvellous two-days boat safari in the Okavango Delta (about €200 per person), a boat tour and a kayak tour in Chobe River NP, and an amazing rafting on the Zambesi river in Zimbabwe. Not bad huh?