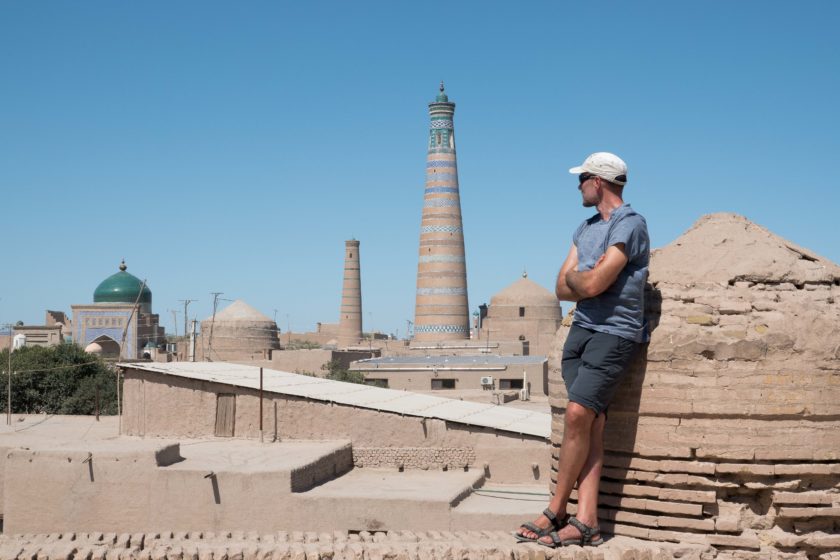 Samarkand, Bukhara and Khiva are names of cities that sound like a legend for their position on the old Silk Road. But does this legendary status live up to its reputation? I was a bit disappointed, while the old forts scattered around the Uzbek desert made me dream.

Alright, I’ll go and say it off the bat: I didn’t find anything special about Samarkand, Bukhara and Khiva. It was a bit of a disappointment to me, perhaps because I had, for unknown reasons, high expectations about these places. But there’s very little authenticity to feel there, it seems Uzbekistan has become fashionable, especially for Europeans, and tourism is big.

Don’t get me wrong, it’s worth visiting them, quickly. The architecture of their walls, forts, mosques, minarets, madrasahs etc.. are quite a spectacle. Of course, if you are into the history of architecture then it’s all more appealing.

In Samarkand, the historical monuments are impressive although the city, perhaps the most known of them all, is nothing more than a tourist hub, not interesting to walk around at all.

I happened to be there during the preparation of an annual celebration right inside the Registan, which was kind of interesting, as the whole place was set up for a light show. There’s a huge bazaar to visit just at the edge of the touristic area too, which is quite fun.

Bukhara is more fun to discover, with some squares and markets around the old town, and also an interesting bazaar to buy some fruit, clothes or some personal hygiene items on the cheap. The big minaret in front of the mosque is pretty impressive.

Khiva is the smallest of the three, but the one with the more character, with that incomplete beautiful minaret of hers. The old town is closed in between walls, and it is really pleasant to walk around it. Of course after the fifth time circling around, having seen all the shops and having met as many times the same people, it becomes a bit repetitive.

Far more interesting, from Khiva, is to take a tour out in the Uzbek steppe, or desert, I can’t decide which of the two it is. You can go visit up to 10 abandoned forts, some date a few centuries B.C, some have been built or rebuilt in medieval times. In any case, the places are quite charming, the force of history is strong with them.

It kind of makes you dream of old caravans and faraway travellers, getting to Khiva or one of the forts scattered around it, with their horses and donkeys, ready to buy and sell products. Traders, yes, but also adventurers. People who used to go towards the unknown for months, through all kind of perils.

If you want, you can make your tour longer and go until Muynak, a long ride through the steppes, to check out the ship cemetery where once stood the Aral Sea.

One of the biggest environmental disasters of all Central Asia, the water of the Aral Sea has been used for cotton plantations, and retreated hundreds of Km, leaving an immense desert in its place. From Muynak, it takes another 180 Km on a four-wheeler drive to get to the shores of what is left of the Aral Sea.