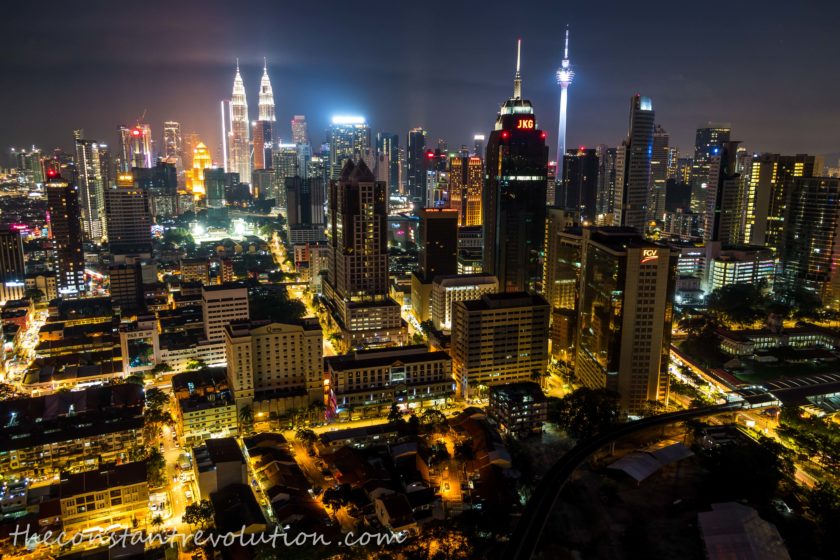 Find some rooftop swimming pool and bar, sit back drink in your hand, and enjoy Kuala Lumpur’s world-famous skyline, with its Petronas towers, the highest twin skyscrapers in the world. Everything else is just a tasty plus.

I have never seen a city with so many malls in my life. Everywhere you look at, everywhere you go, there’s an entrance to some air-conditioned, multi-layered mall with shops and food courts. Really, I never go to malls, never did, and in Kuala Lumpur I could not avoid it, it was like “shit I am in a mall, when did this happen? I wanted to catch the train…”. I believe the density is so high it’s impossible to escape their gravitational pull.

Now that I have stated this very interesting fact, I can go on and underline that the best thing to do in Kuala Lumpur is probably to find some rooftop bar or swimming pool, ideally both, sit back with a drink in your hand, and enjoy its world famous skyline. The Petronas Towers, highest twin towers in the world with their 450 m. at the tip, are right at the centre of the city to be admired from every angle and time of the day.


The best option of all would be to be in some place slightly outside the city centre so that the skyline would completely unravel in front of your eyes in all its majesty (featured image). Otherwise, there is a wide choice of skyscrapers, hotels and bars with rooftop facilities to chose from.

But if you want to try the thrill of heights and have a view from atop everything else (besides the Petronas), then you can go to Menara Kuala Lumpur, the city’s communications tower which has gained the title of the 7th highest free-standing tower in the world with 420 m at the tip.

Unlike for the Petronas, where you can go only up to the bridge that connects them, on Menara there is an accessible roof well over 300 m. high, with an overpriced bar and a restaurant, a skybox for some extra chills, and quite the view on the entire city. Some people even skydive from there.

The ticket cost 99 MYR (about 22€ – 25$) but there is no limitation on the time you can spend there. So, for example, you can go just before sunset and wait for dark, and enjoy the view both at day and night time.

Alright, I am done with the city view and skyline, let’s see what else can be done in Kuala Lumpur, besides frequenting malls that is. Oh right, inside the Petronas – it is worth to go and walk around them at night time – there is a mall of course, with high-end fashion shops.

There are several places where to go for food in KL (malls for example 🙂 ), with an ample choice between Indian, Chinese, Malay and Western food. I have visited only two of them.

The first is a classic, right in the middle of the city Jalan Aloor street is the epicentre of a hectic neighbourhood which has become the main tourist and backpacker hub of Kuala Lumpur. Not only you will find food courts and street food there, but also a lot of pubs and restaurants for a fun, and expensive, night out. It’s very busy and chaotic, but a must see.

The second was a nice surprise, perhaps the best thing I have actually did in Kuala Lumpur. Situated on the East edge of the city, Tamman Connaught night market is open only on Wednesdays. It’s a proper street food market frequented almost exclusively by locals and very few tourists, and it offers some street food I had never seen before. Curiously tasty, I have loved it.

WALKING AROUND IN KUALA LUMPUR

I must say the city is really not easy to walk around. If you try to move by foot long enough you’ll encounter some big and apparently insurmountable obstacles, such as a multi-lane road with a lot of traffic. It is also extremely hot, and besides skyscrapers, there isn’t much to see.

However, the “historical centre” of the city is worth visiting for its many points of cultural interest. This is the area around the Jamek Mosque, the Sultan Abdul Samad Building, and other highlights also from the colonial era, and then galleries, museums, memorials and more.

There’s a lot of big street signs scattered around indicating a “Historical Walk” that passes by all the points of interest. I didn’t do the whole walk, only some of it, then I went by foot to Menara, the communication tower, forty minutes away, and from there to the Petronas Towers, another forty minutes. All in all a nice city walk through different type of neighbourhoods.

What strikes the most is the contrast, in certain parts of the city, between its modern look rich of skyscrapers and all, and the presence of cultural, colonial and religious sites.

In Kuala Lumpur there are also some parks that are supposed to be nice to explore. I didn’t have the time to do it, but the main attractions in this sense are the Botanical Gardens and the Forest Eco Park.

TRANSPORT IN, AND OUT KUALA LUMPUR

Kuala Lumpur urban transport is well organised, with decently connected and very cheap metro stations, trains, and buses. Also using Grab app for taxi rides is very cheap, especially if you can share it in two or three it is almost as cheap as the public transport.

Easy to reach by train or bus from anywhere in Malaysia, Kuala Lumpur is well known to be one of the main low-cost air travel hubs in the world, it certainly has the biggest low-cost airport terminal.

That’s why there are a lot of tourists, although the city itself is not really interesting. It’s a nice stop over for a couple of days, but nothing more.