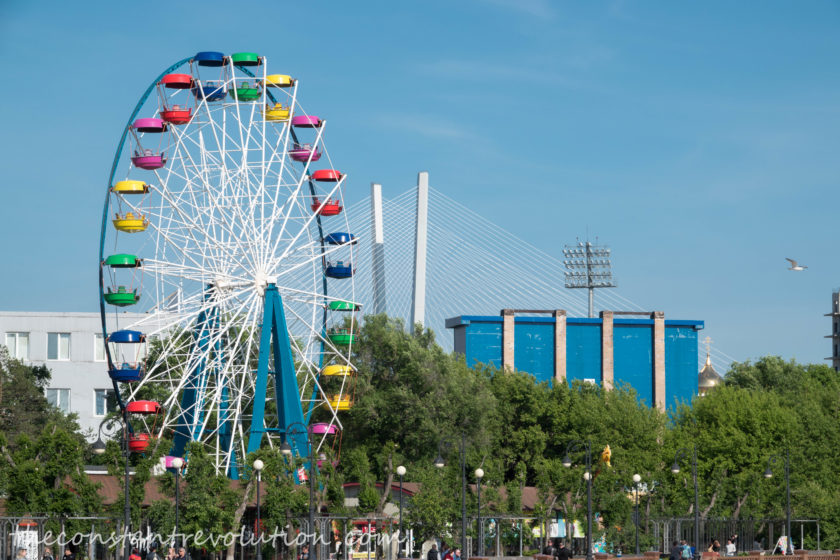 Both Vladivostok and Khabarovsk claim the title of Eastern capital of Russia, but who actually deserves it?

I won’t let the suspense kill you and I’ll get straight to the point: Vladivostok wins. I mean, it’s Vladivostok, the arrival point of the Trans-Siberian Railway, with China, North Korea and the Sea of Japan at its doorstep. Only for this, the town has acquired the status of legend, perhaps a little more than necessary in people’s imagination.

Once there, you realise it is quite a regular city, with lots of bars and restaurants, pedestrian spaces along the seashores, and quite some tourists. Ferry services connect with South Korea, and once a week also to Japan, and flying in from the neighbouring countries is quite cheap. So Vladivostok is a popular destination for a weekend of shopping and nightlife.

It’s a nice city to visit too, with several interesting cultural highlights, and the impressive longest cable-stayed bridge in the world (1,104 m.) which connects the city to Russky Island. Unfortunately, the island isn’t so easy to visit unless you take an expensive tour, speak Russian, or have your own means of transport.

That goes for everything else outside the city, for example if you want to visit the Land of the Leopard National Park or the Ussuriysky Nature Reserve or go trekking somewhere around the 900 Km long Sikhote-Alin mountain range, perhaps looking for the Amur tigers.

At any rate, Vladivostok is to be preferred as the departing point to visit the many national parks of the Primorsky Krai region.

Khabarovsk is a nice town, but neither the vibe nor the aesthetics are comparable to Vladivostok, it lacks something important to see, a unique attraction or activity. It’s just a quick passage on the Trans-Siberian railway, not even necessary in my opinion, and that’s all I have to say about it.

This seemingly harsh judgment might be due to the fact that I spent three days in Vladivostok, it was sunny, there were lots of people around, and on June 12 it was Russia Day with many celebrations in town, music, exhibitions and folk dances. On the other hand, I spent only one day in Khabarovsk, it was raining, nothing was going on and absolutely no one was on the streets, it was indeed quite gloomy.

So, that’s that. When we have little time to spent in a few places, external circumstances are crucial to influence our perceptions. This is something I have noticed in every place I go. It’s enough, for example, to meet someone nice, go for a beer and have a laugh, and everything changes, even if the actual place is nothing special. Therefore I would understand if Khabarovsk would result much nicer to some other travellers.