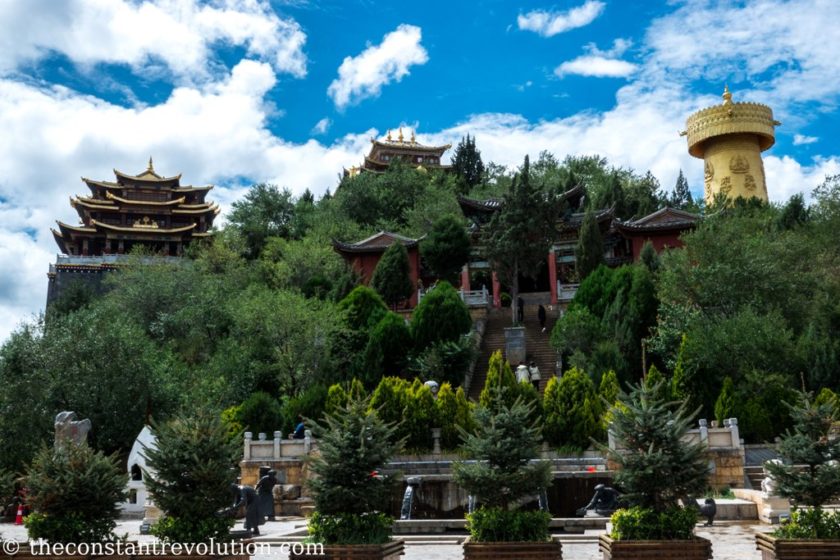 Lovely Shangri-La makes for a nice pit stop in your Yunnan travel itinerary: good food, charming temples, the biggest prayer wheel in the world, and rain are on the menu for this visit. It’s here that China meets Tibet, not strictly in a geographical sense…

I’ll be honest, I have spent only two nights in Shangri-La, one day and a half in total, and I had to take care of some logistical things. Furthermore, it rained almost all the time (apparently it is one of the rainiest cities in the area). So, the total time of my visiting amounted to one afternoon, during which I walked around an actually cute old looking town and I tasted some good Tibetan style hot pot.

I skipped the famous Ganden Sumtseling Monastery in the north of the town, as it cost 120 Yuan. No go for me, as I said elsewhere, if I am to spend 10 or 15 bucks every time I visit something, my budget would run out too quickly.


Guishan park instead (featured image), in the centre of the town and reachable by foot, is for free. It’s a quick tour, half an hour or so, but you can visit the two small temples at the top of the hill, and have fun pushing the biggest prayer wheel in the world together with other visitors, strictly in a clockwise sense of course.

Finally, I have visited the Red Army Long March Memorial Hall, situated on the square in front of Guishan park. Easy, right? It proved to be quite an interesting visit. I’ll talk about it a little further down.

With an elevation of over 3,000 m, Shangri-La in north-west Yunnan is the first place where you encounter some traces of Tibetan culture, if you are coming from the south.

From here, you can continue to Tibet, if you have obtained the necessary permissions, or you can move into West Sichuan, known as Tibet with no need for permits. And it really is!

In a way, it is where China meets Tibet, as it is so close geographically.

The Memorial Hall I visited is also very interesting from this point of view. The main idea sold there is that Tibetan warriors and Chinese soldiers joined forces to fight the Japanese, during the second Sino-Japanese war.

On the square in front of the entrance, there are statues representing this peaceful encounter which have allegedly become a brotherhood. The museum is really modern, there’s a lot of information, a lot of photos, a corner with 3D holograms of high-rank Chinese officers giving speeches, even a huge room with drawings of soldiers going through the harsh winter of the Yaha mountains, with sound effects and all. Icing on the cake, the soundtrack from the movie Interstellar is permanently on. Actually pretty impressive!

I found all of this fascinating, as an example of cultural appropriation, or one of well-hidden history.

I went to verify some of the information provided in this museum, and I could not match it on any site. I’ll be honest again, I didn’t do an in-depth research. I am a travel blogger not a historian. But, by what I found, it appears that Tibetan weren’t so cooperative with the Chinese army, or at least they are not mentioned on the sites I checked. On the contrary, it seems that some Japanese expeditions tried to sneak into Tibet and convince the locals to fight on their side.

This would need to be checked by a real historian, specialised on that geographical area perhaps. Are you one? Please come forward 🙂

Be it as it may, the visit to the Memorial is interesting, and it is very possible that a part of local history happened in ways that are unknown, or are considered irrelevant, to the general development of a war that was politically and geo-politically really complicated.

THE LEGEND OF SHANGRI-LA

Shangri-La is the name of the fictional paradise described in James Hilton novel Lost Horizon, published in 1933. Despite the existence of the city in Yunnan called Shangri-La the true inspiration of the beautiful landscape described in the novel is a mystery.

Some have pointed out the closeness between the publication of Dr Joseph Rock’s photos of Yading Nature Reserve (which I have trekked) and its Holy Mountains on national geographic in 1931 with the issuing of the novel in 1933, therefore inferring James Hilton took inspiration from those photos.

Dr Rock was indeed the first westerner to venture into the area, in the late ‘20, and to show its beauty to the entire world with his photographic work.