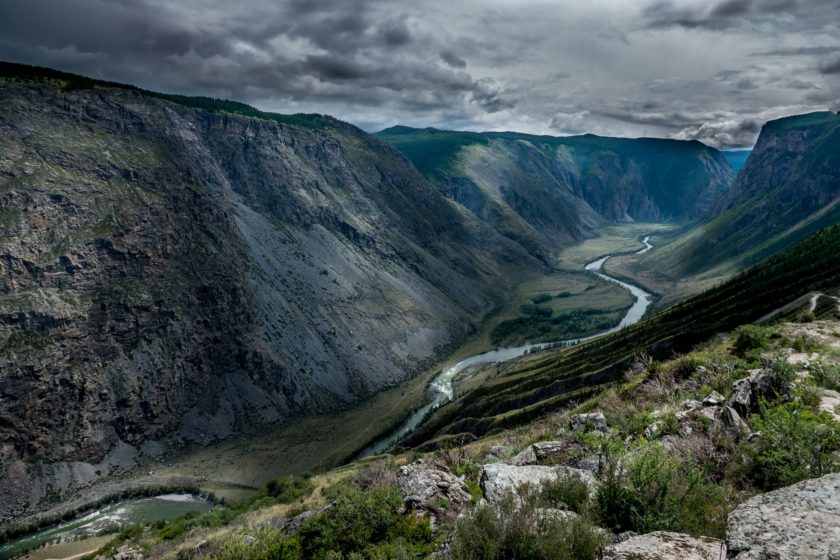 Golden in every aspect, a Tour through the many UNESCO heritage sites of the Russian Altai mountains is a must if you find yourself wondering the area, especially with a Russian only speaking group and guides 🙂

My last adventure in Russia has taken place among the dramatic mountainous landscapes of the Altai Republic, where I went trekking and camping for eight days with a small group of people, all but one speaking exclusively in Russian 🙂

Not a problem, people have ways to understand each other even without any spoken language. With hand gestures for example, as an Italian, I guess I should consider myself a specialist in this art. But if you are in lack of this peculiar talent, then a shared glass of Vodka will make any hard Russian heart beating with sincere friendship for you. Like the driver of our four-wheeler truck who went from timidly calling me Pasha (short for Paolo in Russian) to outspokenly calling me karifan (friend, in some kind of Russian slang). And this only after a couple of sessions drinking Samagon, a sort of homemade vodka, together.

Our guide Vladimir was, to my childlike eyes, the archetypical Russian man: tough to the core, with a good hearth. And a good chest. On our second day, after a 45 minutes walk on a steep mountain trail he spots me drinking a sip of water and says, with a thick as it can get accent “I never drink when I walk mountain.” Then he nonchalantly lights a cigarette, so I say “but you smoke” to which he simply replies “daa!”. I loved him since.

We also went to do a couple of Banya together, the wooden warmed Russian sauna, most welcomed after a day trekking in the Altai mountains and the cold humid night that awaits you in the tent. He lamented that a real banya would be at least above 100 C. Luckily for me, those were “bad banya”.

The truck took us on a so-called Golden Ring Altai tour, stopping by the most important natural highlights of the region: the Chulyshman valley, with its mushrooms rock formations and waterfalls; the Aktru valley, with the 4,040 m M. Aktru and its immense 350 m. deep glacier; a drive through the famous Chuya road, considered one of the most spectacular in the world; and a cruise on the transparent waters of Lake Teletskoye.

Most of the time is spent on the car and in short walks, with just a couple of day-long treks. There are many well-equipped campsites along the way and no lack of Russian tourists enjoying nature.

So, for once I went with an organised tour, the cheapest I found to be honest, which cost me 500 Euros for eight days, without extras such as alcohol and banyas. Starting and ending point for me was Barnaul, the gateway to the Russian Altai, only 4 to 5 hours from Novosibirsk on the Trans-Siberia railway.