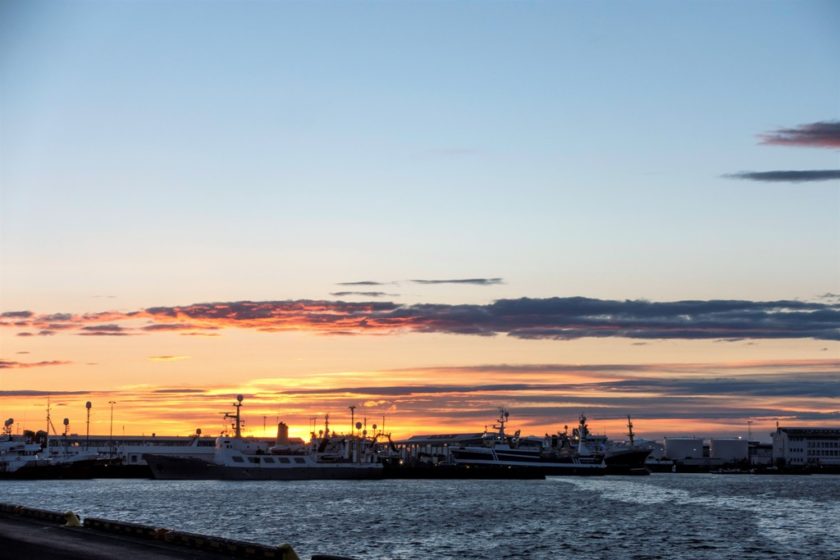 When you travel to Iceland, there’s a couple of day trips you can’t miss. Find the highlights in this post, and some extra thoughts, mostly about the hidden people.

The main reason I went to Iceland was really the Laugavegur trail. However, I had time to spend in Reykjavík and to go on a tour of the so-called Golden Circle. I also visited the very well- known Blue Lagoon Geothermal Spa, where every bloody tourist goes. Not great! I should have known how to spend my time better. It’s just a natural swimming pool, a very expensive one no less, where there’s nothing to do other than sitting in the water. Booooooring! And uninteresting! After half an hour I was ready to go! But let’s speak about something else. For example, that Icelandic air is on sale in Reykjavik, and in summer you can still see the sun at midnight, as the featured image of this post shows 🙂 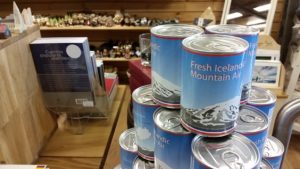 I really loved the Icelanders, for the little I could interact with them! Really nice people, proud of their country, of their way of life, of their history, and certainly not lacking a sense of humour. I had to take a daily tour by bus to visit the Golden Circle, and I loved the sites visit, but the most interesting and entertaining part of the trip was to interact with the bus driver, who was also the tour guide. The way he spoke about his country, the traditions, the economics, the history went far beyond a tour guide repeating a lesson to some dumb tourists. He was passionate about the information he was providing, he had this sparkle in his eyes, this pride. He really wanted us to discover and understand the country.

Cheap and clean energy for all, in a very cold country no less. In fact, in Iceland there’s quite a surplus of energy, reason why heavy metal industries re-located there, providing many jobs. But Icelanders do look far ahead. They know when the time comes, and energy becomes cheaper in other places, all those industries, and jobs, will be gone. They are already thinking of alternatives: tourism (big boom in the past years), selling energy to Europe, and more. Smart!

That the Icelanders are people with some foresight and brains was very clear to me even before I visited the country. Indeed, it is one of the few countries in the world (perhaps the only one) that did what had to be done with the 2008 global financial crisis: they let their three major banks fail, and they went after reckless bankers and corrupted politicians. The cost fell on the people of course, as always.

But Icelanders decided to start over with a clean slate, and that decision came from the people, and there was nothing that could be done against it. This, is the very definition of democracy. Then it can be argued that it’s a small country, with only 300,000 inhabitants, and that made things easier, and so on and so forth. But they did have the guts, and the intelligence, to do what no one else did. Go Iceland! 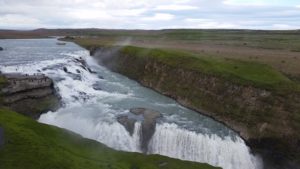 Back to my bus ride, one really fun conversation was about the Huldufolk – the hidden people, or elves. Oh, there would be so much to say about this, but this is not the right place – more information on the folklore can be found here, or through one of many media stories, like this one.

Our guide explained that more than half Icelanders do believe in Elves. These creatures are supposed to live in nature: in trees or rocks for instance. They can be any size, also very similar to human beings, but most of the time they are invisible to us. Many Icelanders swear they saw or talked to Elves, although, said the guide, often late at night and with more than few glasses of beer in the belly. It’s great he could joke about this, while at the same time – I could tell by the witty sparkle in his eyes – he was a believer.

This belief has very old origins, it is deeply rooted in the history, folklore and culture of Icelanders, and therefore it has an important place in their lives. At times it can have a real impact: we were told about the famous story of the road construction that had to be modified because intended to pass right on an Elf house.

It made the news all over the world, and I understand how it could be something that inspires a laugh or even derision from tourists and foreigners. It happens also to the most open minded, that little thing that just makes you smile about something you don’t understand or approve of. It’s human, nothing to be worried about. But I would like to support the belief in hidden people here, for what matters. 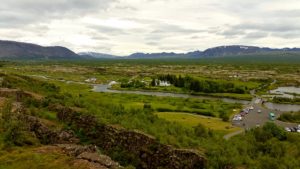 To me, believing in the hidden people is no different than the act of praying for example, or building a temple, or believing in astrology and all the other things that some people consider superstitions, and some others beliefs. None of that is a proof of existence, or truth of anything really. Yet, all of it strongly influences the lives of millions, billions of people in the world.

Why should the hidden people be any different? If anything, the type of life the hidden people have, so close to nature, so much simpler than ours, so unchanged with the passing of time, works as a constant reminder to the Icelanders that progress and change can be good, but not at every cost.

To me, saving a lava rock to the detriment of a road, not to stop its construction but to take the time to find a smart solution, is an act of highly civilised people, and represents a hope that someday everyone will be able to apply such logic to everything that surrounds us. If there’s someone capable to live, progress and prosper while holding on to that idea, it’s the Icelanders. 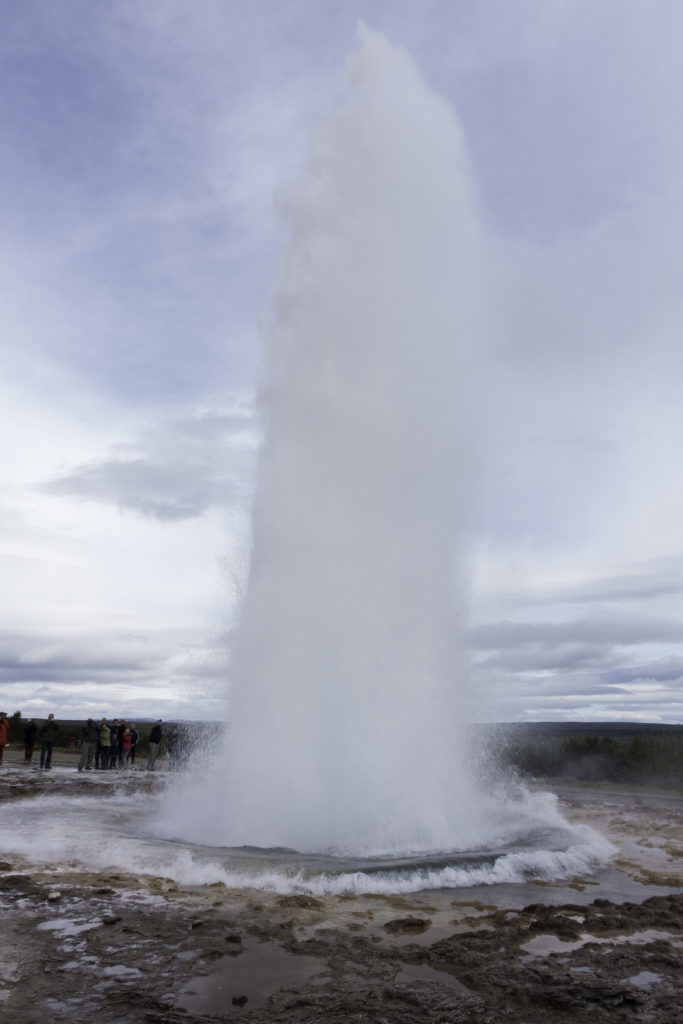 Few words about the sites visit in the Golden circle. The main one for me was the Geysir geothermal area, where a geyser about 30 m. high goes off every few minutes. Quite a show. We were told once there was in the same area a geyser over 100 m tall, possibly the highest in the world, but at one point it went silent, and never came back. Geysers too have a life span.

Then there was the Gullfoss waterfalls, very nice. But I must admit, and probably I’ll repeat this every time I’ll talk about waterfalls in this blog, this is not the type of things that get me excited. I even went to Victoria falls in Zimbabwe and just shrugged it off as a lot of water falling from a high place. There’s certainly an inherent beauty in waterfalls, it’s just that it does not give me the same emotion as other panoramas or activities.

The UNESCO site Þingvellir National Park instead wasn’t really beautiful but it was very interesting for two reasons. Its historical significant, as the location of the oldest parliament in the world, or so claim the Icelanders, an information I haven’t verified to tell the truth. It was founded around the year 930 BC at Þingvellir, which was evidently considered the right spot to gather together the representatives of the whole island for the first time.

Þingvellir is also quite a unique place because here you can see the Mid-Atlantic ridge above ground, which is the second interesting point of this site visit. Basically, here the Eurasian and North-American tectonic plates pull the country apart by a couple of cm every year. Something that normally happens deep in the oceans.

The Capital gave me good vibes too. One day we just went to relax at the city swimming pool. Because in Iceland there’s so much energy to use, the whole Olympic size pool was heated, and on the side there were several hot tubs with different temperatures. All of it open air, despite the Nordic temperatures, even in summer. There were saunas too, of course.

Food is kind of expensive, but it can be found at reasonable prices, especially in the port area rather than the city centre. There are some specialties to try, like whale (although there is a moral conundrum here) and fermented shark. The latter is really an experience, we had a taste at a market close to the port, but we ended up just getting some dried fish to bring home.

Alcohol is instead very expensive everywhere. On the positive side, it is very possible to come across good musicians and concerts in Reykjavík. Otherwise, the city is relatively small, and the night life is basically limited to a couple of streets with few bars and pubs. In one of these places, I got challenged at chess by a young guy. I lost. Well, not everything can go well in a Icelandic holiday.