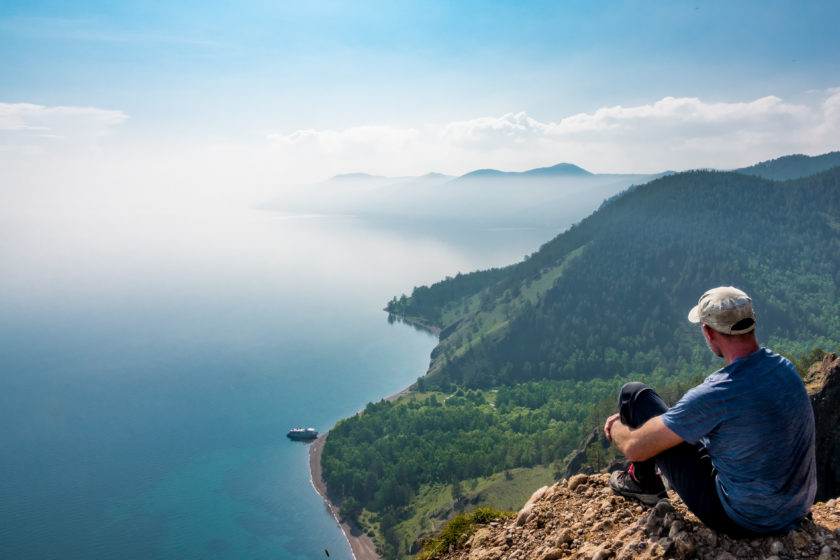 How you change plans last minute and find yourself on the Great Baikal Trail for three days of wild camping along the shores of Lake Baikal in Siberian Russia. And what an amazing trail it was!

Lake Baikal in Siberian Russia is both the bigger and the deeper freshwater lake in the world. In winter, when temperatures reach -40 C, it’s completely frozen and expeditions are organised to cross it by foot or even by car.

In summer, it’s a good spot for fishing, camping, sunbathing etc. and it’s surrounded by never-ending Russian taiga. Ulan-Ude (worth visiting as the Russian centre of Buddhism and Shamanism) is the starting point to visit the East-coast of Baikal, up to the village of Ust-Barguzin. This side of the lake should be quieter.

Irkutsk, the capital of Siberia, is instead the starting point to visit the West-coast of Baikal, which is busier. The one spot above all recommended by any guide is Olkhon Island, for its natural beauty and as one of the five shamanic power centres in the world, if you are into that kind of things.

Transport to Olkhon Island can be easily organised from Irkutsk by any accommodation. That was my plan and when I arrived at the hostel I booked my place on the bus for the following day.

Little I knew that two French guys had already agreed to go trekking and camping for a few days with Artyom, hostel manager and Baikal Ice Man.

I went for lunch with them and on our way they invited me to join, Artyom said with his deep voice and thick Russian accent “YEES, REAL BAIKAAAL!” He had to say nothing more. One minute later we were hugging to celebrate our new friendship, he returned the money for the bus to Olkhon Island, and we went to get beers.

On the following morning, surprise, two German girls who just checked in at the hostel decided at the last second to join as well. And so our group of six hitchhiked towards Listvianka, about 70 Km south of Irkutsk and point of departure of the Great Baikal Trail, which extends in that trait for about 55 Km up to a village called Big Goloustnoye, inside the Pribaikalsky National Park.

Despite capricious Siberian weather and two nights of stubborn rain, the trail was great fun with a great company. We set up campfires to cook and keep warm, learnt survival skills, sang shamanic songs, saw no bears (let’s not forget this is called bear land) and let the constant movement of Baikal crystal clear waters lullaby us into sleep.

The coastal trail was wild, rough, and magnificent! I’ll let the photos speak for themselves, although, as always, it’s impossible to show in photography the vastness the eyes were witnessing and the incredible nuances of colours the sky and the lake, in a joint effort, decided to gift us.

Baikal Lake is surrounded by myths and legends, and for the three days we stepped on its shores a mysterious mist kept floating around taking different and incredible shapes, as to protect with a Fata Morgana the deep secrets of this mystical place.