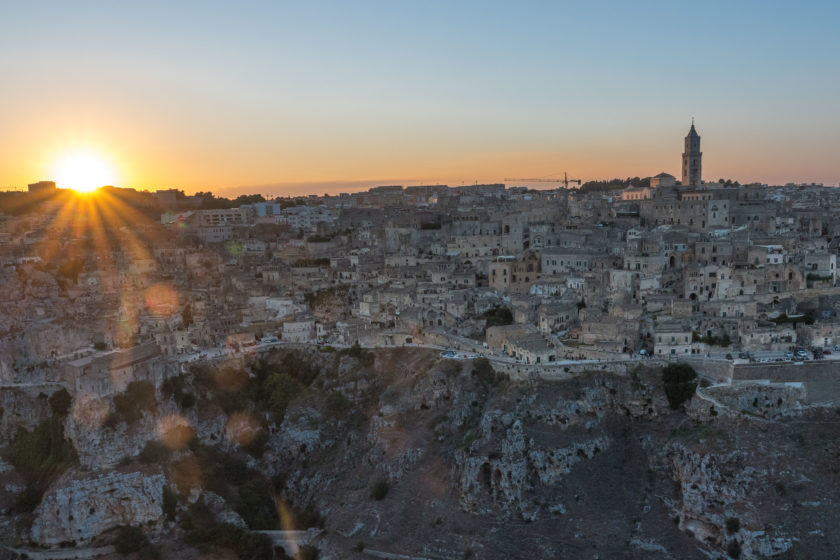 Within the relatively unknown region of Basilicata lies the most unique town I have ever seen in Italy. Matera is an absolute must-visit.

Matera is one of the most unique, beautiful and photogenic places I have ever seen, an absolute Italian jewel, UNESCO patrimony, and possibly one of the oldest continually inhabited settlements in the world.

Indeed, although it seems the issue is still debated, the town might have been settled already in the Paleolithic (10th millennium BC). It was definitely founded with its current name in Roman times though, around 250 BC.

Also known as the underground city, Matera is famous for its ancient town two main neighbourhoods, called “i Sassi” which have been built, or perhaps it is better to say they came to be inhabited by digging out the local calcareous rock from the territory, therefore creating small caverns like formations one on top of the other.

When you walk around “i Sassi di Matera” you are always walking on top of some other empty spaces carved in the rock, today used for hotels, restaurants and shops mostly.

However, for a long time, until the industrial revolution, “i Sassi” were used as warehouses, and only after as households, but only by the poorest part of society, as they were considered unhealthy uninhabitable places. At one point they were evacuated and nationalized, and around the 1980s the local government started to work on their reevaluation as a cultural patrimony.

Going up and down the two hills where “i Sassi di Matera” have come to be, getting a little lost perhaps, it’s the charming thing to do in this town. Of course, over time old Matera has developed a whole architecture rich of more complex households, churches, and small confusing alleys connecting it all. It’s kind of indescribable really, quite unique.

As if that wasn’t enough, Matera was carved on top of a deep canyon slope, a rocky ravine carved by a river locally known as “La Gravina”. This canyon provides for some stunning views of the town, especially at sunset, but any time of the day is fine really.

All around the edges of the canyon, opposite the town, and in the nearby countryside which is today better known as Murgia National Park, rise a series of Rupestrian Churches, which is another of the unique characteristics of this place.

A bus service connects Matera with the park, it’s a short ride and then it’s possible to trek the dry and barren Murgia National Park following an interesting and picturesque Rupestrian Churches trail, with the canyon and the town always there, in the background, to please the eyes. A real treat for photography lovers.

Matera was for me a real, splendid surprise. But its beauty is renown and it has inspired many film directors over time, which have made it the setting for their creations. Just to mention a few: Pier Paolo Pasolini, Roberto Rossellini, Giuseppe Tornatore, Mel Gibson… and the last James Bond film has just been turned there too.

For all these good reasons, Matera is European Capital of Culture in 2019.