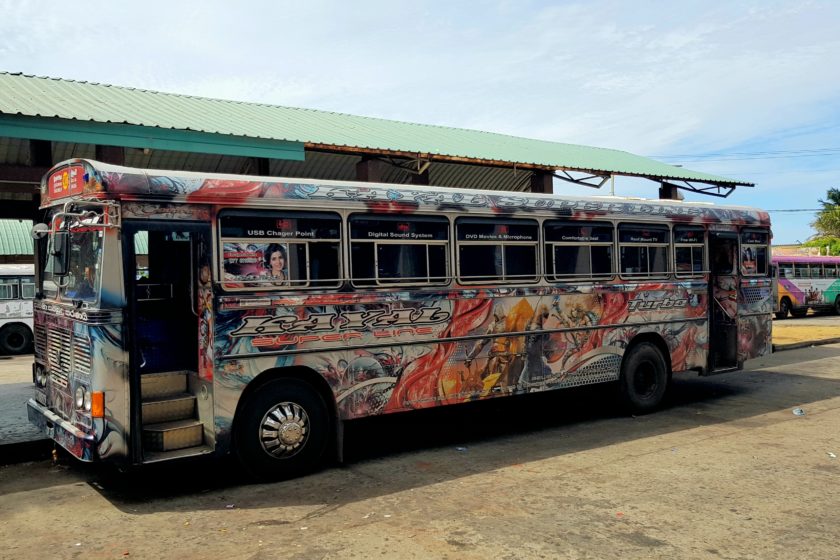 Transport in Sri Lanka isn’t just moving around, it is part of the experience, sometimes scary, sometimes fun. You can jump on buses or trains, self-drive, rent a car with a driver or a Tuk-Tuk for yourself. Here’s how to do it all and avoid scams.

I spent more than a month backpacking around Sri Lanka, I have used trains, buses and drove a car myself for a while, and I have seen other people using different means of transport. So, here’s a description of how to do it all and avoid some little tricks Sri Lankan sometimes try to play on you.

I am a low budget traveller, therefore most of the time I use public transport. In Sri Lanka, this is extremely easy and cheap. The whole country can be visited with a mix of trains and buses, and tuk-tuks for the last bits. Tickets for the bus rides are paid when you are on it, while train tickets are bought at the counter in advance. Trying to figure out the right counter at some messy stations, like in Colombo, is part of the fun, I guess.

Trains are in general more comfy and safe, so whenever possible I suggest taking a train. Sri Lanka is famous for its beautifully slow train rides up on the mountains: the trait between Nuwara Eliya and Ella is sometimes called the most beautiful train ride in the world. I haven’t done it, I visited that area by car. But I guess it is worth a go. Travelling by train might also be the cheapest way.

Trains do not go everywhere in the country though, while with buses you can literally reach any place. There’s a lot of companies both private and public. There’s no difference whatsoever among them in terms of the vehicles they use (see featured image). Perhaps, there’s a difference in prices for the tickets, which might be a little cheaper with public companies. But it’s kind of hard to understand who is who.

Watch out for scams: when you get to a bus station lots of people will ask you where you are going and they will tell you their bus goes exactly there, what a coincidence. That is not necessarily true though. Often they will leave you somewhere halfway through and you’ll need to find another bus or means of transport. If you point out to them that they lied to you they will just pretend not to understand and smile back at you. At that point is too late to complain, just always ask confirmation to people at the station that are not the bus drivers or assistants, and in any case, be ready for this to happen. The same thing happens all over the place with Tuk-Tuk drivers, who will tell you there is no bus going from a point A to a point B, and you have to take the Tuk-Tuk. Often this is just a lie.

A word of advice: bus drives are very long (buses stop all the time for anyone that waves at them and there is always room), very hot (tropical weather and no air conditioning), and very much crowded (sometimes you’ll have to stand). To top it all up, bus drivers are crazy, they keep accelerating and breaking with no reasons, and they adventure is some suicidal takeovers even on mountain roads. It’s an experience, sometimes a bit scary, just like the whole traffic can be in Sri Lanka if you are not used to it. But I recommend to give it a try, it’s fun too, perhaps not for the whole trip if you have more money to spend to move around.

And second, it might be hard to actually find a car to rent at normal prices, especially in high seasons. At the airport you can but the price you pay is at least doubled. In the end, I managed but it took me a few days of asking around and search on the internet. Remember this: in Sri Lanka, you have to call and talk to people, that’s how you create trust. If you send messages via Facebook or emails you seldom receive any answers.

So, buy a local sim card at your arrival, it will be useful. Best reception all over the country is with Dialog by the way.

In Sri Lanka you get pulled over a lot. If you haven’t done anything wrong, you respected the road rules, and you have a Sri Lankan Driving License, normally they would just let it go. This is what happened to me all the time, I had no experiences of police corruption. However, I have been told that in some cases it might happen, and you might end up having to hand over a little money to go, also because the first thing they do when they find “something wrong” is to take your driving license. But again, nothing of the kind happened to me.

Renting a car with a driver

It’s hard to rent a car because Sri Lankan tourist agencies and rental companies favour renting a car with a driver. Obviously, this is more money and many people make a living out of carrying tourists around. Nothing wrong with it, probably the most convenient way of moving around if your budget is not limited. Normally one driver will take you from point A to point B, then another driver will take you from point B to point C and so on. Just ask at your guesthouses for a driver, they will arrange it for you. Don’t forget to negotiate the price.

Finally, Sri Lanka can very well be visited with a motorbike. The roads are dangerous but some are also very scenic. If you are confident about your driving skills then go for it. I have also met a couple of people who rented a Tuk-Tuk! This is in my opinion the coolest option, don’t know why I didn’t do it myself. It’s cheap and fun, and you can go everywhere with it and even pick up people that need a ride here and there if you are backpacking. Next time, I guess.