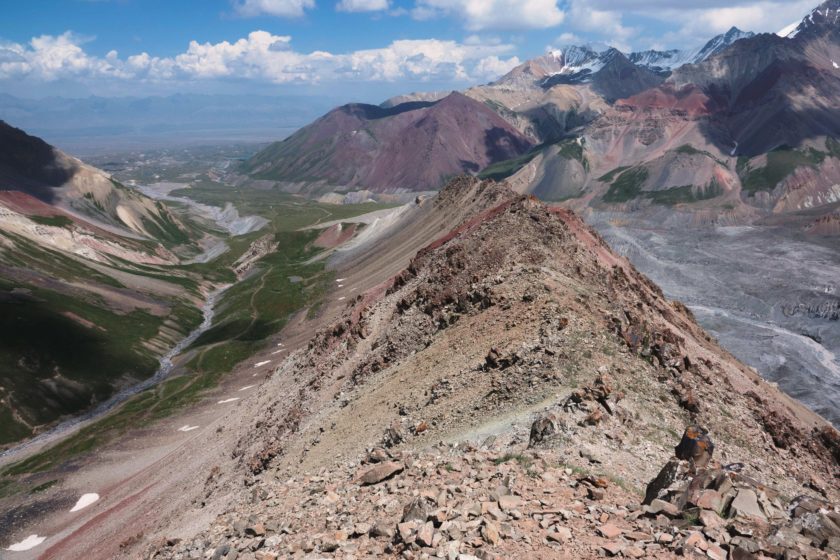 The best way to cross the border between Kyrgyzstan and Tajikistan is through the Pamir Highway, legendary high passage on the old Silk Road.

The passage between Kyrgyzstan to Tajikistan is surprisingly stunning.

Surprising, because I would have never imagined there would be such a striking difference from one side to the other in terms of landscapes. Both countries are covered almost entirely by beautiful mountains, with the Pamir Range, the tail of the Himalayas, ending right at the border between them. Lenin Peak (7,134 m.) claims the position of the second highest summit in both countries.

But while Kyrgyzstan presents immense greenery with its high plateaus surrounded by distant mountains and valleys inhabited by cattle and big troops of wild horses, Tajikistan shows a much rougher face, with rugged peaks, splendidly barren and coloured valleys. Such a difference, which can be noted as well in the Lenin Peak trek alone, all in a border crossing, which is also a mountain pass.

Stunning, because if you have asked for the GBAO permit when applying for your visa, then you are allowed to visit the Gorno-Badakhshan Autonomous Province. That is to say, you are allowed to cross the border between Kyrgyzstan and Tajikistan through the famous Pamir Highway, considered among the three highest roads in the world, with one of the many passes at about 4,700 m.

It’s a spectacular road indeed. It starts (or ends) in Osh (Kyrgyzstan) and commonly believed to end (or start) in Khorugh (Tajikistan), but many have it that it actually goes as far as Dushanbe. Be it as it may, the road, especially if you take the detour into Wakhan Valley along the Afghan border, is stunningly high, stunningly beautiful, and stunningly emotional.

It is a dirt road carved into the side of mountains made of soft, unstable rocks, with deep cliffs on the side and fierce rivers at the bottom. The vibe would be Martian if it wasn’t for the constant roaring of the waters.

Prices range between 1,000 and 1,500 USD in total for the car and driver, depending on how long you want the tour to be, if you are also trekking, taking detours etc… The itinerary is negotiable within the limits of what’s possible. Some cars have space for 4 people, some can carry 6 to split the price with. The same thing can be organized from Dushanbe, but I am not sure with what organization.

Alternatively, as many do, much more than I would expect really, you can cross the Pamir Highway by bicycle, and have a taste of the pains of hell prematurely.

Oh, right, the customs formalities for the crossing run smooth and easy.