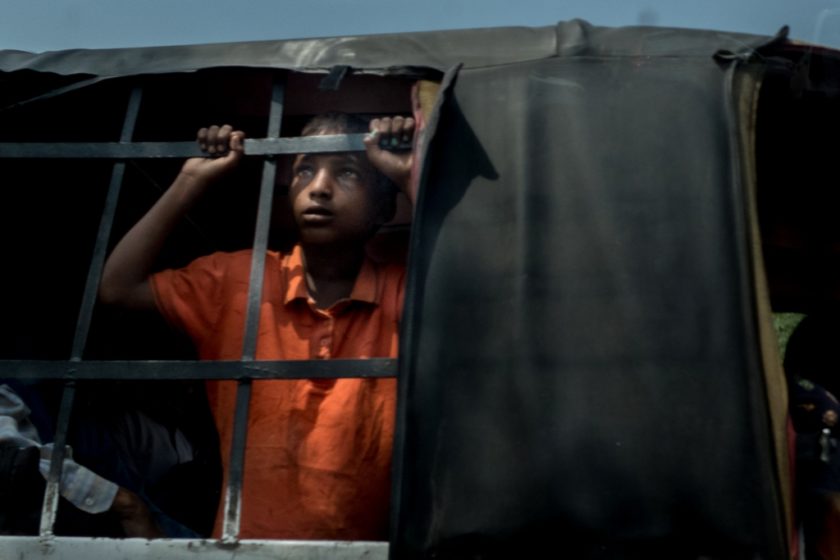 Eyes with no smile and no rancour, with no desire nor fear, neither hard nor gentle. Just the resolute humbleness of those who know hardness, and have accepted an unchanging fate.

I was just going through the streets of Delhi on a taxi, or a rickshaw, I can’t remember, when I saw one of those shared transport vehicles on my left side. We were stuck in one of the usual jams. A boy, orange shirt, was holding onto the bars of the vehicle with both hands, looking at something, at somewhere, looking at a distant place. I happened to be fidgeting with my camera, so I turned it on, pointed without looking as we were about to move, and took the shot.

Later on, looking at the picture, I realized it was telling me more than I expected, perhaps more than I wanted it to. The eyes of that boy weren’t only his. I had seen them already, all over the city, only I didn’t know they were telling the same story. I had seen them in the rickshaw pullers, in the street vendors, in the kids trying to sell you pani – water. I had seen them at the markets, near the traffic lights, on the sides of most streets where people squat, waiting. Eyes with no smile and no rancour, with no desire nor fear, neither hard nor gentle. Just the resolute humbleness of those who know hardness, and have accepted an unchanging fate.

Who are they again? The skinny, the poor, the lower caste? I fucking hate that word. But I am not from here, I am not from India, just a tourist passing by. What the hell do I know? How could I even begin to understand? I don’t understand. I only know those eyes have nothing to tell, and that’s their story to me.

I am really poorly equipped for a photography project, and I never thought I would even start one, but here I am. This page is dedicated to the Eyes of Delhi. I’ll update it as new photos come by.