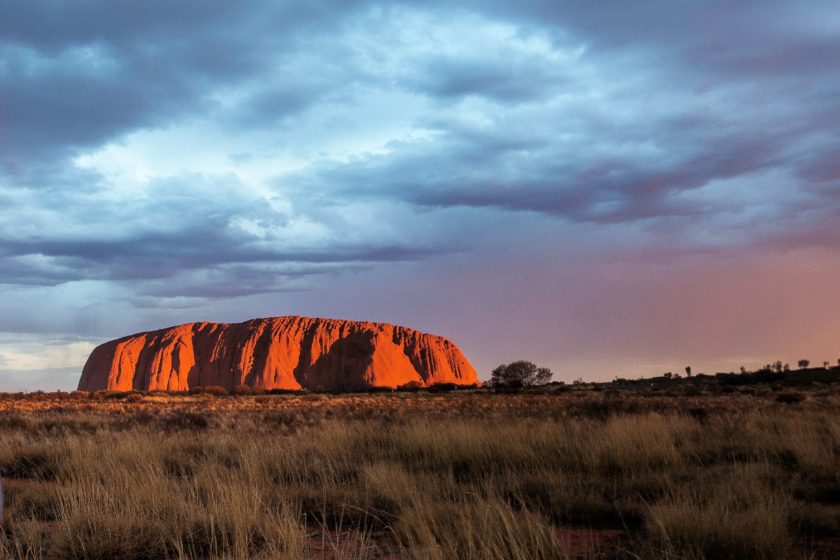 No Australian holiday can be called so without a visit to the iconic Red Centre, and rightly so, it’s definitely one of the highlights of my trip. Three days to go from Uluru (Ayers Rock) to Alice Spring, see magnificent desert landscapes with starry night skies, and learn about the spirituality of aboriginal people, Dreamtime.

After flying to Ayer’s Rock from Sydney, I was picked up by a small bus for a 3 days tour that would take me, and the other people on the bus, so us, from there to Alice Springs. Here there’s a map with the whole Australian itinerary. The main attractions we visited were World-Heritage listed Uluru, then Kata Tjuta, and Kings Canyon. There’s much to say about these places. They are not just rock formations and canyons, as they have been related to the culture and beliefs of Australian indigenous people for millennia. But before getting there, the stars…

STARS IN THE SKY 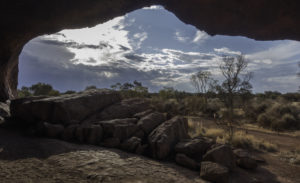 Normally, I do not advertise in my posts, unless it’s cultural things, links to museums etc… But in this case, I’ll add the link of the Rock Tour web page, as I really enjoyed the easy going, laid back, self-cooking, camping under the stars around a fire type of organization. I must say the night sky of the Red Centre is incredible, I have seen there the shape of the Milky Way for the first time. Even better, as we were sleeping open air, just in a sleeping bag under the stars, I could look at that beautiful starry sky as long as I wanted to, or as long as I could stay awake. I have done some camping around, this was really kind of magic.

And about magic, sleeping and dreaming, one of the keywords for the cultural journey through Uluru and Kata Tjuta is Dreamtime. In my understanding, this is the modern name given to the foundational ideas of Aboriginal religion, beliefs, and way of life. It dates back as far as 65,000 years! In a way, it’s like the Christian’s Bible, with ancient stories of how the universe and everything it contains came to be, only it is passed on rather orally than through books, generation after generation.


This is simple enough. However, Dreamtime also provides a kind of totemic symbolism based on several animals. The aboriginals see the signs of these animals, their shapes, on sacred places and rocks such as Uluru, or in the night sky, like in the black nebulae shaping the space between the stars in the Milky Way. Each of this forms has its own legend, which takes place in the mythology of Dreamtime, just like the ancient Greek mythology had different gods, and sometimes other types of creatures. 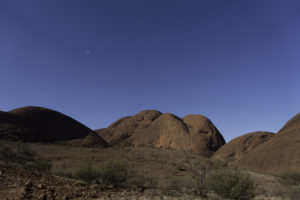 But that’s not all. Dreamtime acquires also a more elevated meaning in the Australian indigenous culture, as something that exists, that has always existed, since before the time of creation, perhaps it’s creation itself. Dreamtime is everything, it transcends time, it’s seen as a continuum of past, present, and future. It’s a concept that provides a lens to interpret life and the universe to these people; a dimension that only they can access through the Dreaming. The closest I can get to explain it to myself is with the idea of TAO in the old Chinese culture: the perpetual becoming of creation, constantly changing, chaos and order, resonance of all things at all times …

Definitions like that one are hard to find and to accept. In the case of Dreaming it might even be impossible. We learnt the Aboriginal people reveal only a small part of their secrets to the non-initiated, which are all considered as children in front of the vast knowledge of dreaming. At the same time, because we were not initiated, we were allowed to visit several places otherwise precluded to indigenous, at least until when ready. This meant mostly walking around the national park, Uluru and Kata Tjuta, after an informative visit to the Aboriginal Cultural Centre.

Now, in my opinion, the most interesting part of the whole trip was really to get to hear the stories about Dreaming, as connected to the sacred places or shapes visible on the rocks. By the way, the top of Uluru is also sacred, and climbing is very impolite towards the local culture. Until not long ago however it was still possible, now finally it has been made illegal.

Anyways, there’s also a more aesthetic side to this visit. We had dinner in front of Uluru the first night, along with two dozen other buses, cars and tours, waiting for the sun to go down and with a gentler, warmer light provide Uluru’s rocks with its iconic intense red colour.

However, a storm approached the mountain and the parking with mountain view and made pretty much everyone run away. It was indeed windy, and it was about to rain, few fat drops started to hit us, but our troop stayed put, courageously cooking in those near impossible conditions 🙂 Finally, we were rewarded. The storm turned away, never really reaching us, and we had the whole panorama for ourselves. Pretty cool stuff. So we ate our food in front of some spectacle, as the photo above shows. Uluru in the middle of a blue-greyish sky on one side, and imbued with warm, red sun rays on the other. There was even a rainbow, yay! 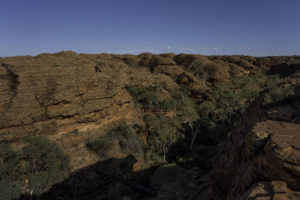 Uluru has also a geological curiosity, I didn’t understand if the indigenous know this or not, or if it’s relevant at all to them. The fact is that the rock is not only very old (500 million years!), it’s also unique in that it’s one single piece, for the most part underground. Just like an iceberg,  only a small part emerges, 348 m above ground precisely, while some 2.5 km remains vertically hidden. 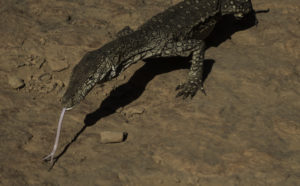 I found the short walk in Kings Canyon the best of the three sites. The canyon is quite spectacular, there are ups and downs (I really needed to stretch my muscles after a long bus ride), change of landscape, amphitheatres, walls, a “garden of Eden”… I even saw my second wild beast in Australia here: a lizard again. A big one, a dragon actually I think it was called, kind of related to the Komodo dragon.

In a way, the only deception of the Red Centre is not to have spotted any wildlife: kangaroos, wallabies, snakes… nothing. I was in Australia for already 10 days and I didn’t see a Kangaroo yet, I was getting impatient. The time would have come, but I had to wait until almost the end of the trip. Incredible. In any case, I didn’t make it to Alice Springs. My Rock tour dropped me at the airport, and from there I flew to Cairns to start my descent on the East Coast.