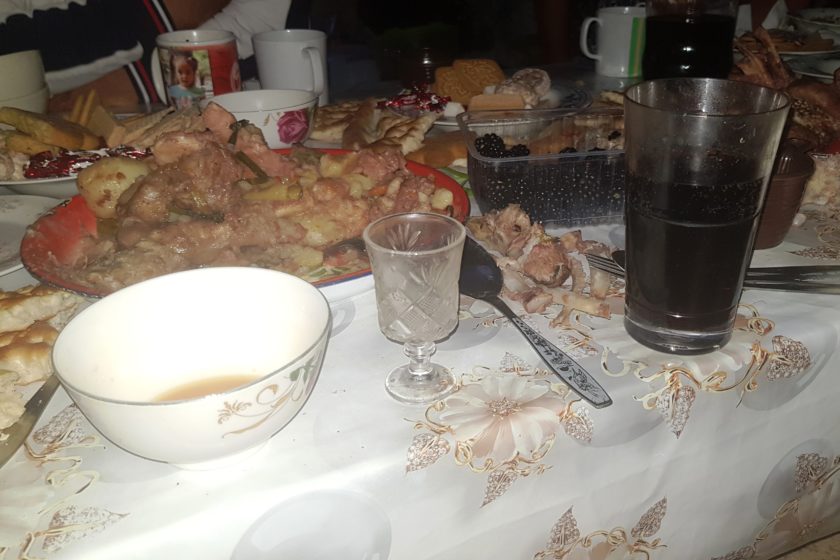 Sometimes you end up in adventures that put your firm plans for the future, and life convictions to the test… and you lose 🙂

I arrived in Almaty after a bus odyssey of 24 straight hours through the burning Kazakh steppes without air conditioning nor sleeping seats. I finally got to the hostel with the firm intention to rest for a couple of days and instead I met Roberto, an Italian from Venice driving around the world with his super cool modified to be a home Land Cruiser, who said something along these lines (in Italian): I am going to go camping at Kolsai Lake tomorrow, wanna come?

How could I refuse such a kind offer? So, I found myself in an adventure that showed from the beginning how firm intentions, and beliefs, can be flexible concepts. In the morning I prepared the necessary and off we went.

The road to Kolsai Lake, East of Almaty and very close to the Kirghiz border, is about 300 Km long. The first trait is pretty regular, but once taken a turn towards the wilderness it becomes one of the most spectacular I have driven over, with vast views of the Kazakh steppe, of canyons and river valleys. It’s that kind of view that you can’t catch in a photo, you know what I mean?

For us, it was even better as Roberto does not hesitate to go off-road with his Cruiser to check some incredible viewpoints where no one has ever gone before… ok, perhaps someone has gone before, but not many.

We reached the entrance of the Kolsai Lake area. Here a local guy asked us for a short ride to go until the lake, which we happily provided for. When we got there, we discovered the camping (and lake) is actually down a road off-limits to cars and my buddy has a rooftop tent. What to do?

That’s when the guy we gave a ride to said something along these lines (in his language): come up the hill there, you can sleep close to my family Yurt.

How could we refuse such a kind offer? Then, while we prepared our night nests, some other people came over and that’s when we got invited for dinner in one of the Yurt nearby.

Suddenly, we found ourselves being the guests of honour amidst huge amounts of roasted lamb with potatoes and carrots, rivers of vodka served with a voracious pace to celebrate the renewed friendship between Italy and Kazakhstan, all of it without having a single word in common to communicate with. Amazing what can happen on a road trip.

Funny thing is that just a few hours earlier I was telling Roberto how vegetarian I am, almost vegan really, which I am sure he didn’t believe much when he witnessed me gulping down big chunks of lamb, not without nasty consequences the following day. To my defence, it would have been really rude not to eat… it was also very tasty.

The following morning we discovered the lake we wanted to visit was actually another one. Ah well, fuck it!